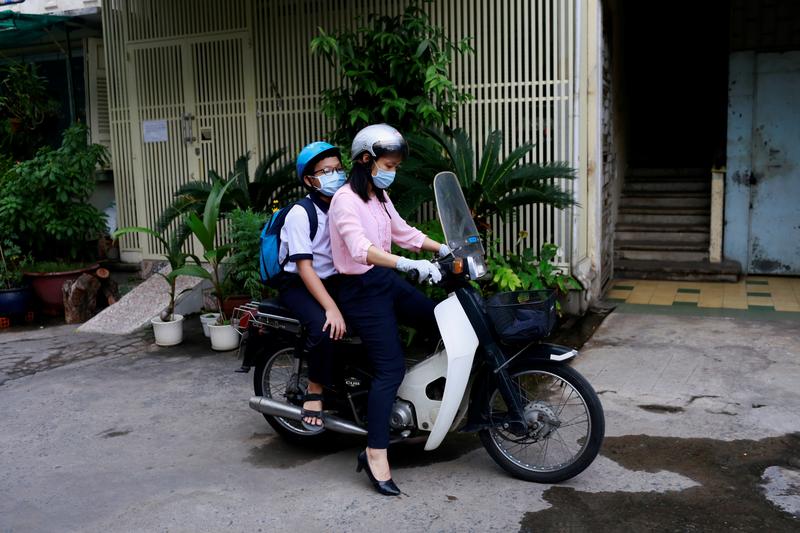 HANOI (Reuters) – Vietnam will extend a strict lockdown in Ho Chi Minh City until Aug. 1, state media reported on Friday, as the Southeast Asian country battles one of its most challenging and unpredictable COVID-19 outbreaks to date.

Do Thi Kim Dung, 41, and her son Nguyen Dinh Thanh, 11, get ready before his first day back to primary school after the government eased nationwide lockdown during the coronavirus disease (COVID-19) outbreak in Ho Chi Minh, Vietnam May 8, 2020. REUTERS/Yen Duong

After successfully containing the virus for much of the pandemic, Vietnam has been facing a complicated outbreak of the virus, with southern business hub Ho Chi Minh City and surrounding provinces accounting for most new infections.

“Due to the rapid and unpredictable nature of the Delta variant and in order to protect people and minimise deaths, city authorities have decided to strengthen a number of measures to control the outbreak,” Ho Chi Minh City’s governing body said in a statement.

The current measures, which had been in place since July 9, include a stay-home order, a ban on gatherings larger than two people and the suspension of public transport services.

Banking and securities services in the city will be reduced to minimal levels, while unnecessary construction projects will be suspended, the Tuoi Tre report said.

Since late April, when the current outbreak began, Vietnam has imposed movement restrictions in about one third of its 63 cities and provinces, including in the capital Hanoi.

The Ministry of Health reported 6,194 new COVID-19 infections on Thursday, a record daily increase. This raised Vietnam’s overall caseload to 74,371, with 370 deaths.

Ho Chi Minh City accounts for around 60% of total cases.

City authorities have asked Vietnam’s Prime Minister for more personnel to help combat the current outbreak, the health ministry said in a Facebook post on Friday.