In the decade since selling out of Lonely Planet, Tony Wheeler has been involved in countless innovative projects and in the tech world there's one Hollywood-focused startup that he's invested in.

Mr Wheeler and his co-founder and wife Maureen have launched a range of new ventures since exiting Lonely Planet for more than $200 million in 2011, including through the Planet Wheeler Foundation and the Wheeler Centre for Books, Writing and Ideas in Melbourne. 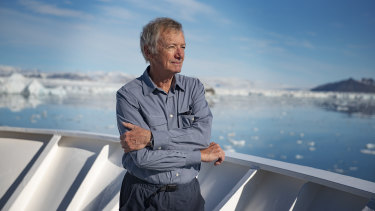 As the co-founder of Lonely Planet guide books, Tony Wheeler is the consummate globetrotter. Credit:Max Seigal

Speaking to the crowd at the Startup Grind conference in Melbourne on Tuesday, Mr Wheeler said quality Australian businesses must fill a global niche that was genuinely not serviced elsewhere.

"Look for things that someone else hasn't thought of," he said. "If you're doing something where there's big competition, you don't want to be doing what they're doing."

Ahead of the event, Mr Wheeler told The Age and The Sydney Morning Herald he wasn't on the lookout specifically for technology business investments, though he was involved with one company: Oakleigh-based movie drone startup XM2.

"I like people who make things… I just love the craft-work that goes into it," he said.

"When it comes to big Hollywood movies, they're right at the cutting edge."

XM2 only started booking big projects around 2015 but the Melbourne business is now taking on the world.

Led by former film producer Stephen Oh, XM2 was co-founded with Aidan Kelly and has designed drones capable of holding cinematic quality film equipment which it provides for cinema, TV and advertising projects in the UK, Australia and across Hollywood.

Its most recent credits include working on the upcoming Star Wars Episode IX and its camerawork features in the first trailer for 007.

Speaking from California, Mr Oh said he met Mr Wheeler by chance one day in Williamstown while filming a job. After a few years of guidance, Mr Wheeler made a "meaningful" investment in the company last year.

"It’s all about growth at the moment and the international presence: We’re just under 20 odd staff, but we are a global company and we don't have any competitors," Mr Oh said.

Mr Oh had been a film producer for around two decades when he started playing with drone technology because it was a personal interest.

"I started a hobby flying remote control aircraft. One thing led to another and we started putting cameras on them," he said. 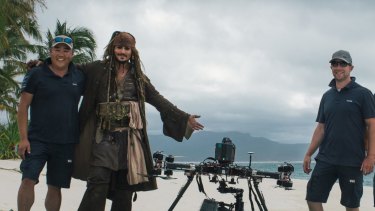 Stephen Oh, left, Johnny Depp as captain Jack Sparrow, and XM2 pilots in the Whitsundays during filming for Pirates of the Caribbean: Dead Men Tell No Tales. On set the drone became known as the ‘Johnny Drone’.

X2M's first projects included the Australian film Lion and a Pirates of the Carribean film in 2015. Since then the startup has built a full portfolio of Hollywood credits and turns over just under $10 million a year.

The next 12 months were all about expanding that global presence to become the market leader across the world's film sets.

Mr Wheeler said the company was exciting because it was filling a global need with technology that was better than anywhere else in the world.

He told the crowd on Tuesday that the Lonely Planet team was able to grow to an international name precisely because of Australia's small population forcing them to consider overseas markets.

"It's a virtue of being from a small place," he said.