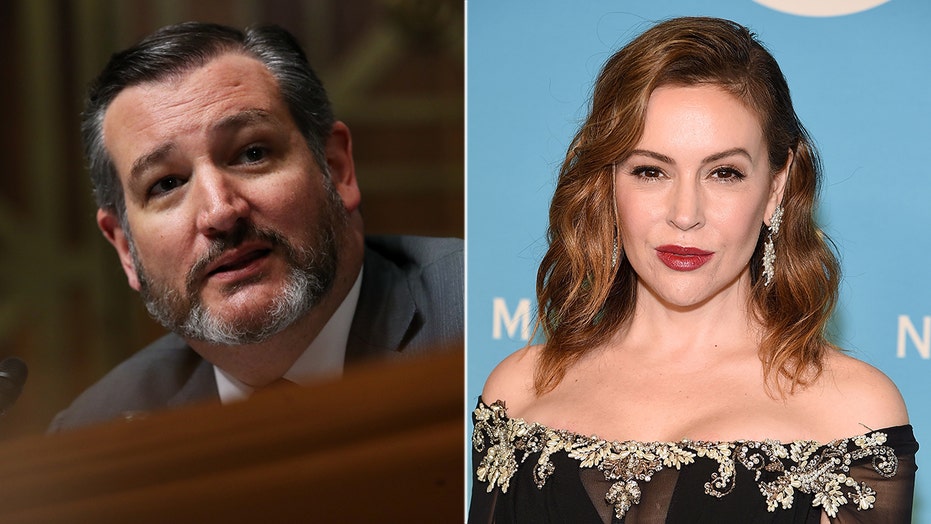 Celebrities like Alyssa Milano and Busy Philipps are reacting to Ted Cruz defeating Beto O’Rourke in the Texas Senate race. ‘Now he can run for President.’

Sen. Ted Cruz, R-Texas, took actress and liberal activist Alyssa Milano to task over her faith-based question about the Bible and the Second Amendment.

On Sunday, Milano responded to Republican Texas state Rep. Matt Schaefer's tweet that he was "NOT going to use the evil acts of a handful of people to diminish the God-given rights of my fellow Texans. Period. None of these so-called gun-control solutions will work to stop a person with evil intent" following a shooting rampage in Odessa that killed seven and injured at least 22.

"Can someone cite which passage of the Bible God states it is a god-given right to own a gun?" Milano asked in a tweet, accusing the Texas politician of being "unbelievable and clearly owned by the gun lobby."

Cruz responded, telling the anti-gun activist, it was an "excellent" question, "worth considering [without] the snark of Twitter," before citing a few examples from the Bible.

CELEBRITIES CALL FOR GUN CONTROL AFTER TEXAS SHOOTING: 'WE HAVE A CRISIS HERE'

"The right to self-defense is recognized repeatedly in the Bible," Cruz wrote, for example, "Exodus 22:2: 'If a thief is caught breaking in at night & is struck a fatal blow, the defender is not guilty of bloodshed.' (Note, though, verse 3 says it IS murder if during daylight (ie, not self-defense)."

Pointing to the "unalienable rights" of "life, liberty, and the pursuit of happiness" within the Declaration of Independence, Cruz says it is "for that reason, the Second Amendment provides 'the right of the people to keep and bear Arms, SHALL NOT be infringed.'"

He says it wasn't put in place to protect hunting or target practice but "to defend their lives, their homes & their families," citing Stephen Willeford who helped stop the shooter in the 2017 Sutherland Springs church massacre.

Cruz, in his 10-tweet reply, added that "disarming Black Americans was a critical objective of the KKK, and was memorialized in countless Jim Crow laws—to strip African-Americans of their God-given right to self-defense from violence."

He says he's leading the fight in the Senate "to do MUCH more to stop violent criminals & those w/ dangerous mental illness BEFORE they murder."

"Playing politics w/ these deranged crimes—and trying to use them as an excuse to violate the constl [sic] rights of law-abiding citizens—won’t make anybody safer," Cruz concluded. "Forcible gun confiscation (as some 2020 Dems urge) won’t prevent mass-murders. But it would weaken our self-defense."

Milano responded early Monday morning, saying she'd "love to come in and meet" Cruz when she is in Washington, D.C. next week.

"We can live-stream the meeting so the American people can hear your bullsh*t 1st hand," she said, adding she'd like to talk about 1 Peter 4:8, which says: "Above all, love each other deeply, because love covers over a multitude of sins."

Lates News:
2019-09-02
Previous Post: Livermore Accumulation Cylinder Suggests Bitcoin To Set New ATH Next Rally
Next Post: Dan Bongino says 'warning signs' of past mass shooters were overlooked or 'not followed up on'