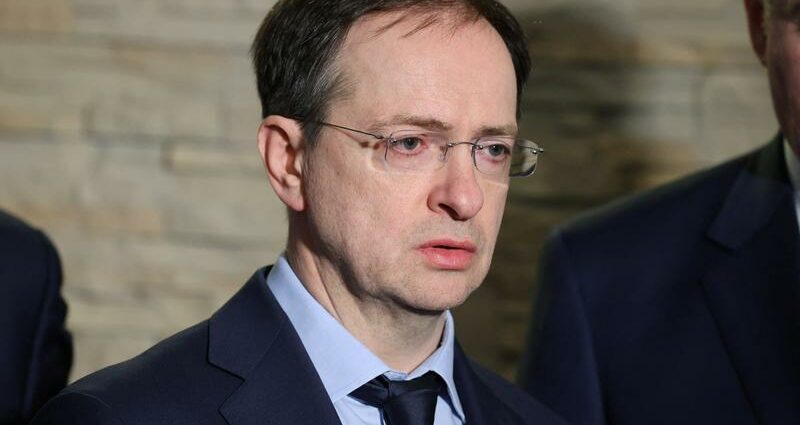 FILE PHOTO: Russia’s presidential aide Vladimir Medinsky, head of the Russian delegation, speaks to the media after the talks with Ukrainian officials in the Brest region, Belarus March 7, 2022. Maxim Guchek/BelTA/Handout via REUTERS/File Photo

(Reuters) – Russia’s lead negotiator at talks with Ukraine said on Wednesday that Kyiv had stated a willingness to meet core Russian demands, but that Moscow’s position on the Donbas region and annexed Crimea remained unchanged.

Vladimir Medinsky said on Russian television that Ukraine had said in writing it was willing to give up its ambition of joining NATO, adopt ‘non-bloc’ status, renounce nuclear and other weapons of mass destruction and commit not to host foreign troops or military bases on its soil.

Medinsky also said Ukraine had agreed not to conduct military exercises with foreign armies except by agreement with state guarantors including Russia.

“Ukraine has declared its readiness to fulfil those fundamental requirements that Russia has been insisting on over the past years. If these obligations are met, then the threat of creating a NATO bridgehead on Ukrainian territory will be eliminated,” Medinsky said.

“This is the essence, meaning and importance of the document preliminarily agreed upon at a … high level by Ukraine. However, work continues, negotiations continue.”

Medinsky was speaking a day after talks in Istanbul where Russia said it would significantly reduce military operations near Kyiv and the northern Ukrainian city of Chernihiv to promote trust, a commitment that drew scepticism from Kyiv and Western governments.

He said Russia was not giving up its insistence that Ukraine recognise the loss of Crimea, which Russia annexed in 2014, and the independence of the two self-proclaimed breakaway territories in eastern Ukraine that make up the Donbas region.

“I want to emphasise separately that our country’s position on principle regarding Crimea and Donbas remains unchanged,” Medinsky said.

That is a major sticking point for Ukraine, which says it will not make any concessions on its territorial integrity.