Pandemic stock winners are in trouble

New York (CNN Business)The knives are out for Peloton and CEO John Foley.

Blackwells Capital, an activist investor that owns less than 5% of Peloton, says it has “grave concerns” about its performance and is calling on its board of directors to fire Foley immediately and explore a sale.
In an open letter Monday, the investment firm sharply criticized Peloton for not capitalizing the success it achieved in 2020, saying it squandered the opportunity to grow sales of its internet-connected bikes and treadmills. Peloton shares have tumbled 80% from their peak, bruised from sagging sales, a massive recall and PR nightmares in popular TV shows. 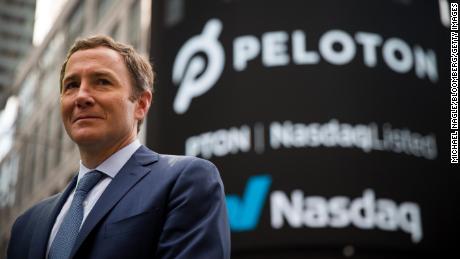 Blackwells’ Chief Investment Officer Jason Aintabi said the company is currently on “worse footing today than it was prior to the pandemic, with high fixed costs, excessive inventory, a listless strategy, dispirited employees and thousands of disgruntled shareholders.”

To turn around Peloton’s fortunes, Blackwells suggests firing Foley for his “repeated failures,” listing 10 examples. They include his pricing strategy (Peloton cut the product on its Bike and Tread in August 2021, only to raise them again months later), his handling of the treadmill recall and a purported temporary shutdown of production. Blackwells also slammed Foley for hiring his wife as a key executive.

“We believe that no board exercising reasonable judgment could leave Mr. Foley in charge of Peloton,” Aintabi wrote in the letter. Peloton has “gotten too big, too complex and too damaged for Mr. Foley to lead it,” adding that Foley “should have enough self-awareness and enough self-interest, to resign as a director.”
A sale could help Peloton, Aintabi argued, explaining that a standalone company wouldn’t “be able to fully exploit the opportunities its assets and brand enable.”
Peloton (PTON) declined to comment.
Many Wall Street analysts have soured on the firm. While 15 still have “buy” ratings on the stock, fourteen have a lukewarm “hold” on Peloton and two even have “sell” recommendations.

If Peloton were to explore a sale, it’s not clear who would be a good fit for Peloton. Apple (AAPL) is occasionally mentioned as a possible suitor, which could make sense given that the Apple Watch powers the company’s Apple Fitness+ app. Citron Research, run by noted short seller Andrew Left, believes meal kit company Blue Apron (APRN) could make sense as a Peloton merger.
— Hey, Peloton owners: Are you still using your Bike or Tread? Tell us why or why not. And if the answer is no, do you plan to sell it? Please email your response to [email protected]
Source: Read Full Article