Commonwealth Bank chief executive Matt Comyn has called for a faster reopening of the Victorian economy, saying that the low level of coronavirus case numbers in the state justify a swifter relaxation of restrictions.

Victoria has seen consecutive days of single digit virus infections and Mr Comyn joined other business leaders in pushing for low-risk industries in the state to be opened sooner than planned.

"France’s daily number of case numbers is larger than the cumulative number of cases in Australia since the onset of the pandemic," Mr Comyn told the Trans-Tasman business circle forum on Monday. "Based on what we’ve seen, there are very, very low levels of virus in Melbourne and in Victoria." 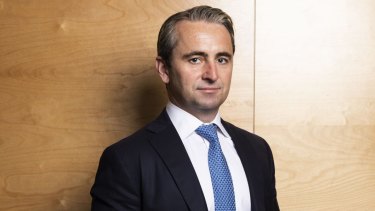 However, retail and hospitality venues will remain closed until November 2 and will only be permitted to open under strict guidelines, within the travel limit.

Mr Comyn said health had become "by far the most important economic policy", and while the Victorian government was erring on the side of caution, a faster reopening would be beneficial.

"They’re obviously trying to mitigate the risks that they see or foresee could lead to a rebound in cases, but based on the level of cases at the moment – it certainly would provide a lot of encouraging support to be able to open the restrictions faster."

"And certainly in some sectors, where those risks could be probably quite well mitigated, there is a lot of encouragement from us and all businesses around the country, and particularly in Victoria, to help them get restarted."

"Clearly this is having a very, very sharp impact on small business and Melbourne is definitely bearing the brunt of the pandemic. Much more harshly than other parts of the country," he added.

The economy would continue to be propped up by fiscal stimulus offered by the federal government, Mr Comyn said, but further hardship was expected once the JobKeeper and loan relief falls off in March.

"Perhaps some of the underlying impact to the economy has been masked for the time being due to a number of those different factors. We’re by no means out of the woods," he said.

However, he added the impact on unemployment and house prices had not been as severe as initially expected and the speed of the recovery would now be determined by state government policies.

"Reopening the economy, the state borders, Victoria, are all critical to that," he said.

Mr Comyn also weighed into Australian relations with China, that have become increasingly toxic as the Chinese government issues directions to avoid Australian industries, including the most latest move to isolate Australia’s cotton industry.

Mr Comyn said China was "a really important trading partner" but added businesses might look to lessen their reliance on one market.

"Some customers who had a singular dependence on a particular market probably are looking to diversify but China will still be an extremely important trading partner."