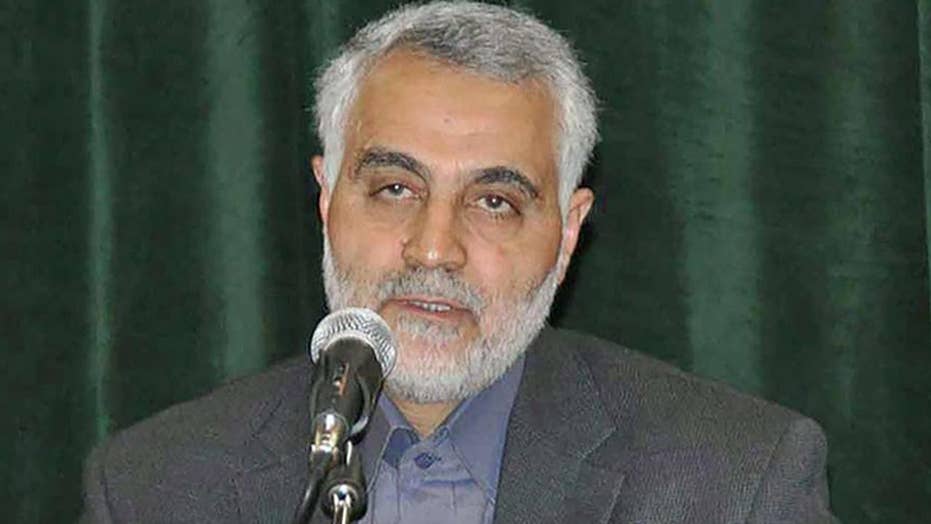 Iran’s Soleimani was responsible for 17 percent of US troops killed in Iraq war, State Department says

Lucas Tomlison reports from the Pentagon on the influence slain Iranian Gen. Qassem Soleimani had in the Middle East.

The New York Times published an eerie opinion piece on Thursday that used a potential attack on Iranian Gen. Qassem SoleimanI as a hypothetical scenario hours before the head of the Islamic Revolutionary Guard Corps' elite Quds Force was actually killed in remarkably similar fashion.

The op-ed, “Hypersonic Missiles Are a Game Changer,” by Quincy Institute analyst and former National Security Council senior director Steve Simon, examined the potential of the powerful weapons. But an example used in the 11th paragraph is sure to have conspiracy theorists buzzing.

“Is there an individual in an unfriendly country who cannot be apprehended? What if the former commander of Iran’s Revolutionary Guards, Qassem Soleimani, visits Baghdad for a meeting and you know the address? The temptations to use hypersonic missiles will be many,” Simon wrote.

Hours after the op-ed was published, the Pentagon confirmed that Soleimani was killed in a U.S.-led airstrike at Baghdad International Airport.

The New York Times did not immediately respond to a request for comment.

Soleimani was killed by missiles fired from a MQ-9 Reaper drone, according to the Times. It’s unclear what type of missiles were used.

The hypothetical attack on Soleimani while visiting Baghdad that Simon pondered is remarkably close to what actually happened, whether or not the specific type of missile mentioned in the op-ed was used. The verified Twitter account of the Times’ opinion section shared the op-ed on early Thursday morning.

The Quincy Institute did not immediately respond to a Fox News request for a comment from Simon.

Soleimani was the long-running leader of the elite intelligence wing called the Quds Force — a special forces external arm of the IRGC responsible for supporting terrorist proxies across the Middle East. It reports directly to Iran's Supreme Leader Ali Khamenei and was itself designated a terror group in 2007. The group is estimated to have amassed a militia of 20,000 fighters.

Lates News:
2020-01-03
Previous Post: 2019 to 2020: Insiders, Outsiders and Experimenters in Crypto Regulation: Part 2
Next Post: Some Fed members worried that keeping rates low would encourage too much risk-taking, minutes show