Kishida hangs on to majority in Japanese election although weakened 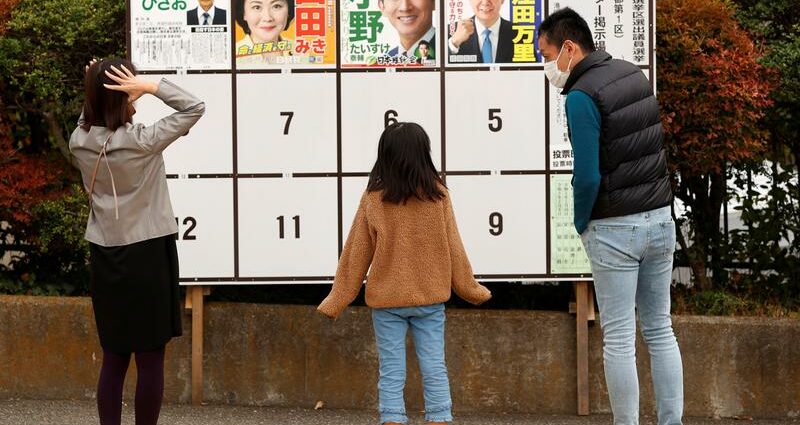 TOKYO (Reuters) -Japanese Prime Minister Fumio Kishida’s ruling Liberal Democratic Party was forecast to hold on to its majority in Sunday’s parliamentary election although it suffered losses that could curb his drive to ease wealth inequality, according to exit polls.

Voters look at posters of candidates for a lower house election, amid the coronavirus disease (COVID-19) pandemic, outside a polling station in Tokyo, Japan October 31, 2021. REUTERS/Issei Kato

Keeping the majority in parliament’s lower house is seen as key to Kishida, himself just weeks into the job, hanging on to his position within the faction-riven ruling party.

Polls by public broadcaster NHK, however, showed the conservative LDP emerging on a weaker footing.

The vote was a test here for Kishida, who called the election soon after taking the top post early this month, and for the long-powerful party, which has been hurt by perceptions it mishandled the coronavirus pandemic.

A soft-spoken former banker, Kishida has struggled to shake the image that he lacks charisma. While he has hewed to traditional policies of the party’s right wing, pushing to increase military here spending, he has also promised to address wealth inequality, touting a “new capitalism” that has stoked concern among investors.

Keeping the majority by itself will preserve the LDP’s ability to shape policy without becoming too dependent on its junior coalition partner, the Buddhist-backed Komeito.

“The coalition itself won’t fall apart and the government will remain, but even given this, the number of seats they have is definitely decreasing and this could make managing parliament difficult,” said Airo Hino, a political science professor at Tokyo’s Waseda University.

That was still down sharply from before the election, when the LDP held 276 seats.

Kishida said the administration would attempt to compile an extra budget this year, in what would be a tight schedule.

“I hope to pass through parliament an extra budget this year” to fund steps to support people hit by the pandemic such as those who lost jobs and students struggling to pay tuition, he told reporters.

A big winner was the conservative Osaka-based Japan Innovation Party, projected to more than treble its seats and surpass Komeito as the third force in the lower house, after the opposition Constitutional Democratic Party of Japan.

The emergence of the Osaka party as a national force may complicate Kishida’s pledge to roll back neoliberal economic policies.

Kishida’s publicly stated goal had been for the coalition to keep a majority, at least 233 seats here, of the 465 in the lower house – although that was widely seen as a lowball target, given that the Komeito had 29 seats before the election.

“Kishida should be able to continue to govern, or start to govern, but maybe there’ll be a bit of a question mark over his leadership in view of the Upper House election next year,” said Koichi Nakano, a professor at Tokyo’s Sophia University.

One of the most high-profile LDP defeats was a former economy minister and the leader of one the party’s factions, Nobuteru Ishihara, who lost to an opposition candidate in a western Tokyo district.

Akira Amari, the LDP’s secretary general – instrumental in Kishida winning the party’s leadership race – was in a close fight to retain his seat.

The usually splintered opposition was united, with only one party – including the widely shunned Japanese Communist Party – facing off against the coalition in most districts.

Some voters – like Yoshihiko Suzuki, who voted for the main opposition candidate in his district and the Communists in proportional representation – hoped the poll might teach the LDP a lesson.

Suzuki, 68 and retired, said the LDP’s years in power made it complacent and arrogant, underscored by a series of money and cronyism scandals.

“I hope this election comes as a wakeup call for them,” he said. “If it does, the LDP will become a better party, considering the number of talented lawmakers they’ve got.”