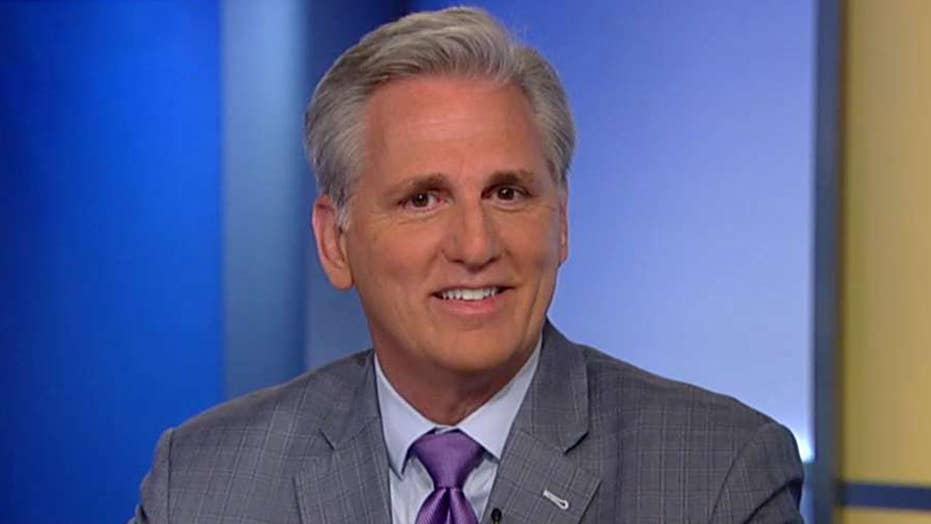 Rep. McCarthy on impeachment: Democrats are afraid to face Trump at the ballot box

House Republican Leader Kevin McCarthy of California ripped Democrats on Thursday in reaction to their performance during the impeachment inquiry public hearings, accusing them of trying to "frame" President Trump to hurt him before the 2020 election.

"I always wondered, 'Why does Adam Schiff lie so much?'," McCarthy said on "The Ingraham Angle," referring to the California Democrat who chairs the House Intelligence Committee. "He wants to impeach this president so badly. I mean, they are afraid to face him at the ballot box. So they want to frame him."

"Why does Adam Schiff lie so much? He wants to impeach this president so badly."

GOP REPS TO ZERO IN ON UKRAINE MEDDLING CLAIMS, AFTER DIPLOMATS STUMPED AT HEARING

"And that's what they'll continue to do, whatever it takes to impeach this president," McCarthy added.

McCarthy continued his criticism of Schiff while talking to Ingraham, saying that it's "all about Adam."

"I just think Adam Schiff, he's only focused on impeaching this president, so he'll lie about anything to get there," McCarthy said. "He auditions these witnesses in the basement. He's gonna do more this weekend. He cherry-picks who can come to to the hearing. If you watch it, it's all about Adam."

"I just think Adam Schiff, he’s only focused on impeaching this president, so he’ll lie about anything to get there."

McCarthy said he wasn't concerned with any potential witnesses stepping forward before giving his timeline prediction for House Democrats.

"They'll go one more week. Then we'll go on out for Thanksgiving. Then they'll have two more weeks and watch," McCarthy said. "They'll move the continuing resolution to Dec. 20. … They will vote on impeachment and then they'll try to do USMCA [the revised trade deal with Mexico and Canada] or something."