Australian insurers could be forced to pay out billions of dollars in insurance claims after five Supreme Court judges found pandemic exclusions in business interruption policies were invalid.

The insurance industry was rocked by an unfavourable judgement on Wednesday evening after the NSW Supreme Court of Appeal sided with policyholders in determining business owners affected by COVID-19 with certain policies should be paid. 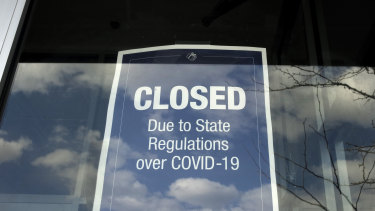 Insurers could be forced to compensate policyholders for lost income due to COVID-19. Credit:AP

Insurers QBE and Suncorp acknowledged the loss in ASX announcements on Thursday morning, but it did not stop the investor sell-off and shares at the two companies dropped by almost 4 per cent over the course of the day.

Insurance Australia Group went into a trading halt so it could assess the financial impact of the judgment and determine if a capital raise was necessary.

Public facing businesses forced to close due to lockdown restrictions, including restaurants, bars and gyms, are among those likely to have business interruption policies. A survey released in August by technology company Fivverr found one in five small businesses have lost more than $100,000 because of the pandemic.

Large businesses could also be affected, with ASX-listed entertainment group Star suing insurer Chubb over rejecting its business interruption claim. The next hearing of that case is scheduled for April next year, with Star arguing it should be covered as the abrupt change in trading conditions was out of its control.

However, the test case ruling is only relevant to policies that reference an outdated Act of Parliament. The mistake is common in policies sold by the major insurers but JP Morgan's senior insurance analyst Siddharth Parameswaran said the exact number of policies affected had not been reported.

"They clearly didn’t intend to cover business interruption. They never charged a premium for it," Mr Parameswaran said. "It’s the ones where they had the wordings wrong… that’s where the risks are."

QBE said it expects each claim will be no larger than $5 million and the total payments should not exceed the group's reinsurance cover of $500 million. Suncorp on Monday increased its provision for business interruption claims by $125 million to $195 million in the event of an unfavourable court ruling, but this provision was dependent on there not being a third wave or further lockdowns.

Morgan Stanley told clients IAG's strong capital position would be maintained "even if it were to incur an unlikely $2 billion of gross claims". Few claims were lodged before the test case, "but more seem likely now", it said.

Macquarie said it did not expect capital raises to be necessary and estimated the total exposure would be around $225 million for IAG and $250 million for Suncorp. It said between 35 to 40 per cent of business insurance packages would include a business interruption add-on and estimated total market losses of $1.25 billion.

The test case was brought by the Insurance Council of Australia (ICA) to extinguish doubt that pandemic exclusions were valid after the Australian Financial Complaints Authority received a handful of complaints about denied claims.

"Obviously the insurance industry didn’t expect to lose it. Now, it looks like there certainly will be some claims that they may not have been expecting that they’ll have to pay out on," Mr Parameswaran said.

"As a consumer lawyer, we see insurers rely on the plain black letter wording of their own policies to deny claims all the time," he said. "Insurers have an obligation to ensure that their products are up to date with the existing legislation. If they fail to do that and it’s to their own disadvantage, that’s too bad. They're stuck with the consequences of their error."

The ICA said it would consider an appeal as well as a second test case to "explore outstanding policy matters" including proximity and prevention of access. "The Insurance Council will continue to work with all stakeholders and government to provide clarity for all parties and the industry."

Mr Mennen called on policyholders to make a claim as soon as possible. "If it turns out that insurers ultimately are liable, the claimants who have made claims may well be entitled to interest and consequential losses for the delay."

Okcoin secures regulatory approval in Malta and the Netherlands