HONG KONG, Oct 21 (Reuters) – Hundreds of Hong Kong riot police confronted pro-democracy demonstrators on Monday night as they gathered to commemorate the three-month anniversary of an assault by more than 100 men on protesters, commuters and journalists.

The stand-off in the Yuen Long district, in which there were no immediate clashes or scuffles, followed violence on Sunday when tens of thousands marched through the Kowloon district and hardcore activists threw petrol bombs at police, torched entrances to metro stations and trashed hundreds of shops.

Under a policy that deems marches illegal unless they have a police permit, police were blocking the way to around 100 protesters trying to reach the Yuen Long metro station in Hong Kong's northwest, and closed the station five hours early. 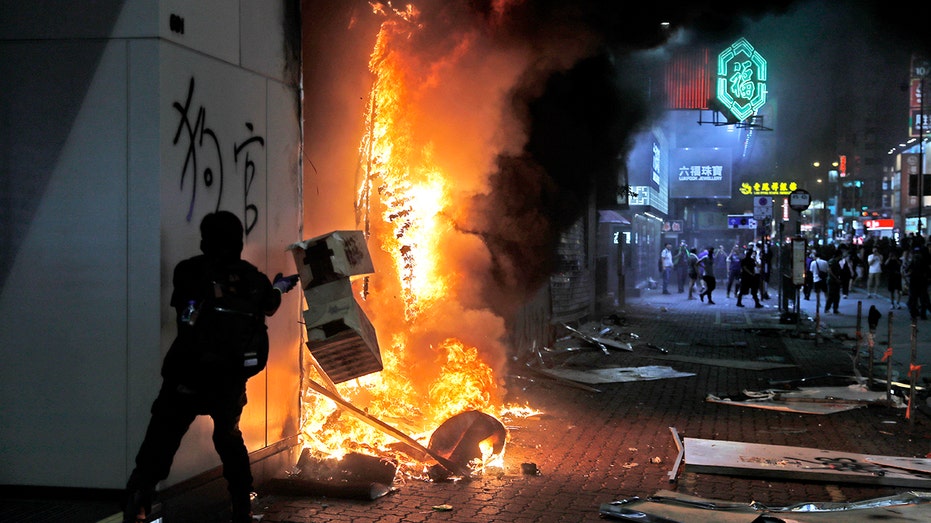 Protesters are angry that police did not act quickly enough to protect pro-democracy activists and commuters from the July 21 gang assault on them in the Hong Kong metro, and at what they say is a slow investigation into the incident.

At the time some believed the men had been hired to attack the group. Some politicians and activists have linked Hong Kong’s shadowy network of triad criminal gangs to political intimidation and violence in recent years, sometimes against pro-democracy activists and critics of Beijing. 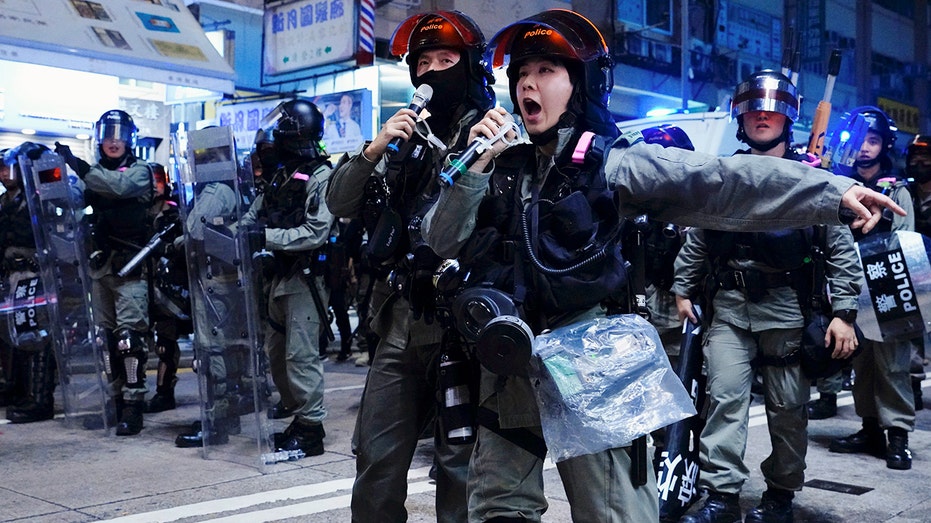 Police officers using speakers to warn protesters on the street of Yuen Long, Hong Kong, Monday, Oct. 21, 2019. A evening sit-in at a suburban train station on the three-month anniversary of a violent attack there on protesters by men with suspected

Riot police marched down the street ordering protesters to disperse on Monday, warning they would fire tear gas. At one stage they rushed protesters and detained one person.

At one stage scuffles broke out between pro-Beijing supporters and protesters.

Yim, a 42-year-old social worker, said he was in Yuen Long station on the night of the attack, adding it was important to continue to protest against such mob violence.

"If they really wanted to catch those attackers they could," he said. "There were many people filmed that night but they’ve only arrested six people so far … we want an independent investigation and justice for this attack. The police are selectively enforcing the law." 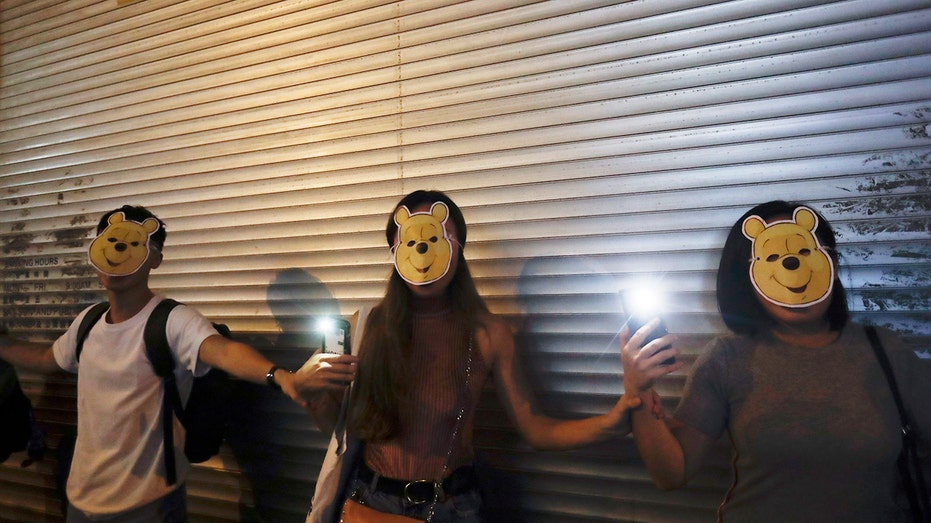 Protesters wear Winnie the Pooh masks during a protest in Hong Kong, Friday, Oct. 18, 2019. Hong Kong pro-democracy protesters are donning cartoon/superhero masks as they formed a human chain across the semiautonomous Chinese city, in defiance of a g

Hong Kong has been battered by more than 5 months of anti-government protests, and despite two weeks of calm, Sunday's mass rally showed there was no end in sight to the unrest.

Embattled Hong Kong chief executive Carrie Lam has rejected the demands of protesters and backed police using violence against them. Many say police have used excessive force against them, firing thousands of rounds of tear gas and hundreds of rubber bullets against brick- and petrol bomb-throwing activists. 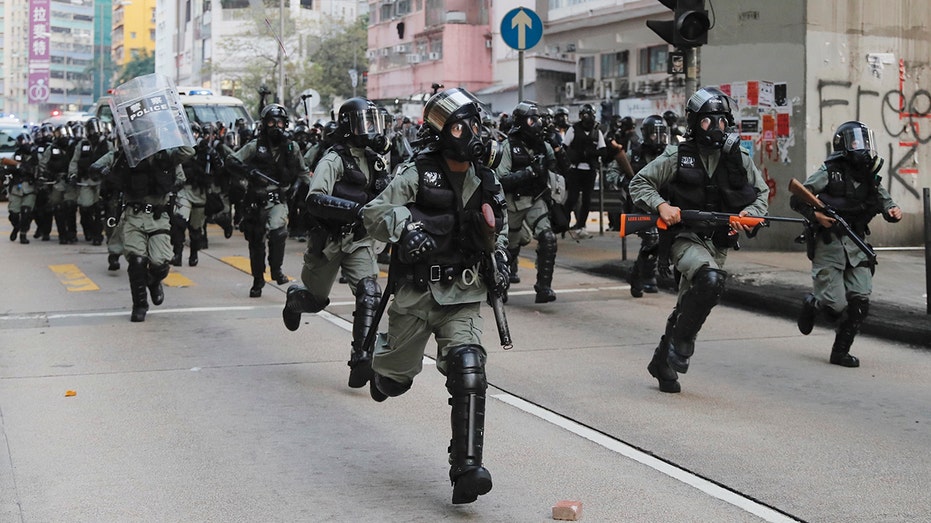 Many people in Hong Kong are angry at what they see as mainland China's attempts to limit the freedoms the city enjoys under the "one country, two systems" principle enshrined in its handover from Britain in 1997. 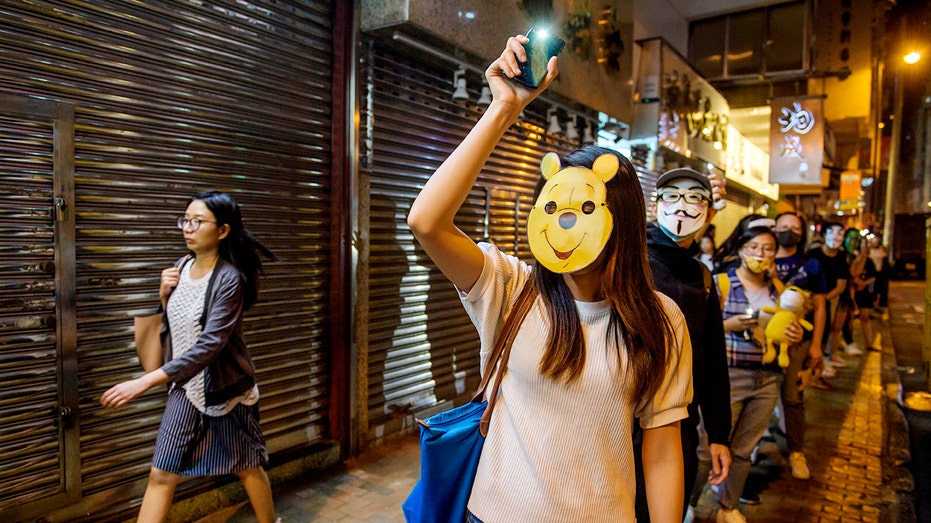 A protester wearing a ‘Winnie-the-Pooh’ mask joins others to form a human chain along a street in Hong Kong on October 18, 2019. – Hong Kong has been battered by more than four months of sometimes violent unrest that have battered the economy, sparke

The protests pose the biggest popular challenge to Chinese President Xi Jinping since he took power. Beijing has denied eroding Hong Kong's freedoms and Xi has vowed to crush any attempt to split China.

Protesters are demanding universal suffrage, an independent inquiry into alleged police brutality, amnesty for those charged, an end to labeling protesters as rioters, and the formal withdrawal of a China extradition bill which ignited the unrest.