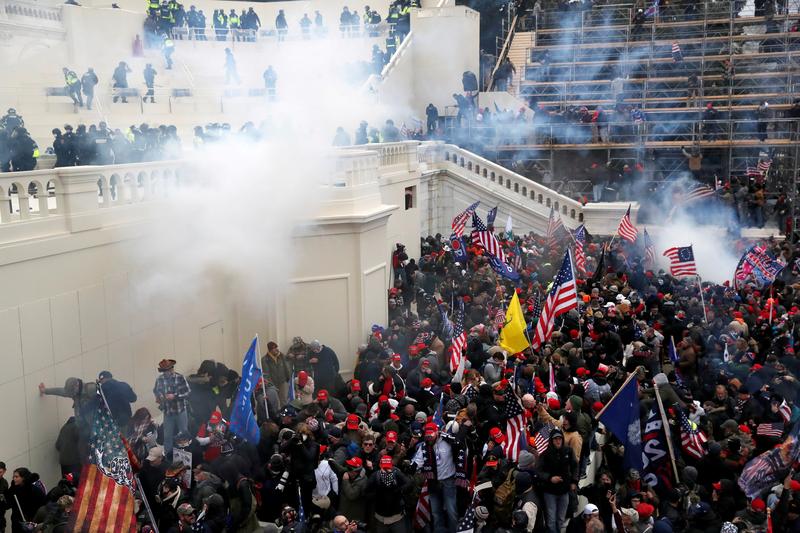 WASHINGTON (Reuters) – Former U.S. House Sergeant-at-Arms Paul Irving denied Tuesday authorities had rejected having the National Guard deployed at the U.S. Capitol on Jan. 6 because it might look bad, saying the intelligence did not warrant the troops’ presence.

FILE PHOTO: Police release tear gas into a crowd of pro-Trump protesters during clashes at a rally to contest the certification of the 2020 U.S. presidential election results by the U.S. Congress, at the U.S. Capitol Building in Washington, U.S, January 6, 2021. REUTERS/Shannon Stapleton/File Photo/File Photo

Irving made his comments in written testimony for two Senate committees investigating the security preparations and response to the attack on the Capitol by a mob of supporters of former President Donald Trump. The committees began a joint hearing at 10 a.m. EST.

Irving said that on Jan. 4, he had discussed the possible use of 125 National Guard troops with then- Capitol Police Chief Steven Sund and former Senate Sergeant-at-Arms Michael Stenger.

“’Optics’ as portrayed in the media did not determine our security posture … We did discuss whether the intelligence warranted having troops at the Capitol, and our collective judgment at that time was no – the intelligence did not warrant that,” Irving said.

Irving’s testimony appeared to be in direct conflict with Sund’s account. Sund said he had requested National Guard troops but that Irving “stated he was concerned about the ‘optics’ of having National Guard present.”

Sund, Irving and Stenger all resigned in the wake of the Jan. 6 violence that left five people dead.

Also appearing Tuesday at the hearing was Robert Contee, the acting police chief in Washington, D.C.. His forces helped the Capitol Police control the mob and eventually clear the Capitol so that lawmakers could return to certify President Joe Biden’s election victory.

Senators in the Homeland Security Committee and the Committee on Rules and Administration want to find out where the breakdowns in planning and response occurred that allowed the violence to unfold in and around the citadel of American democracy, endangering the lives of, among others, Trump’s vice president, Mike Pence.

In media interviews, Sund has blamed the former House and Senate sergeants-at-arms for not green-lighting his request for back-up from the National Guard ahead of Jan. 6. Once the rioting started, it took hours to get permission for the troops, which ultimately had to come from the Pentagon, Sund said.

Sund also says intelligence agencies did not pass on anything ahead of time indicating an orchestrated attack on the Capitol might happen.

The Washington Post has reported that the Capitol Police’s own intelligence unit warned on Jan. 3 that “Congress itself” could be the target of Trump supporters summoned by the then-president to fight his loss in the Nov. 3 election.

The FBI also says it warned law enforcement agencies on Jan. 5 that extremists were preparing to commit violence, although the warning was based largely on unconfirmed intelligence such as social media postings.

Some Department of Homeland Security officials were also concerned by social media postings, but an official familiar with intelligence reporting said Trump appointees at the department blocked efforts to circulate that intelligence widely around the government.

Scores of police were assaulted in the melee, with over 140 Capitol Police and some 65 metropolitan police injured.

More than 200 people have been charged so far for their roles in the riot, including some with ties to far-right fringe groups such as the Oath Keepers and Proud Boys.

Lates News:
2021-02-23
Previous Post: Air force pilot ‘strangled girlfriend and buried her body behind hotel’
Next Post: NZ bank profits fell 28 per cent in 2020 but they still made over $4 billion