The chief executive of the peak body for financial planners is calling on regulators to consider waiving fees as the sector struggles to meet demand for advice while shuttering physical offices and instituting emergency plans to manage the severe market downturn.

Dante De Gori, head of the Financial Planning Association of Australia, has also sent a letter this week to the federal government calling for a law change to give retirees the option to reduce compulsory superannuation withdrawal rates.

"Electing to take less income may not be possible for some retirees, however it could make a significant difference for others," Mr De Gori wrote. 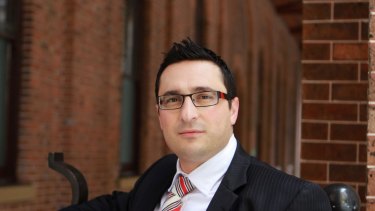 The boss of the Financial Planning Association Dante De Gori is calling on the government to change superannuation laws.Credit:Sasha Woolley

During the Global Financial Crisis, the government reduced the compulsory withdrawal rates by 50 per cent to ensure retirees weren't crystallising losses in the stock market by withdrawing capital as prices plummeted.

Under current laws, superannuation account holders who have switched to "pension phase" are forced to withdraw 5 per cent of their balance per year starting at 65 years old and this number progressively increases up to 14 per cent as you age.

Mr De Gori said similar measures could be taken to allow retirees to leave money in their superannuation accounts until value returns to the stock market.

"Our members are continuing to work with their retired clients to navigate the current market volatility and the uncertainty caused by the pandemic," the letter reads. "Reduced minimum payment rates would provide an additional strategy to manage these challenges."

Director of Yield Financial Planning James McFall, who has several elderly clients, said newly retired workers are the most exposed to anxiety over the market falls and would benefit from a change in the draw-down laws.

"I think it's a great idea," Mr McFall said. "People who are newly retired are most vulnerable because there's an adjustment period to feeling comfortable as a retiree. Nor only do they need to rely on their money for longer but they're now drawing down on their assets.

"Some would prefer to not draw any at all [from superannuation]."

Mr De Gori also called on regulators to waive fees and education costs as the sector struggles to meet the spike in demand for financial advice while implementing contingency plans and responding to extreme market volatility.

"During this time, people want someone who is calm, rational and instils confidence that things are okay and what action to take if things are not," Mr De Gori said. "Half the time financial planners spend counselling, the other half is decisive action, what steps should be taken."

Financial planners face a range of regulatory costs and levies enforced by the Australian Securities and Investments Commission. Mr McFall pays a $4500 regulation fee to ASIC per year and between 5 and 20 per cent of the company's total revenue goes to licensing fees. Some of the company's income is tied to the investments the firm manages on behalf of clients and with a 30 per cent drop in the equities market, McFall's bottom line is struggling.

Mr McFall's team has been working overtime to get the right messaging out to clients and deal with how to limit losses. He said a reduction in regulatory fees would be a "great help" to cushion the impact of the extreme volatility.

ASIC said levy waivers would be considered on a case by case basis and would only be approved if "exceptional circumstances" were demonstrated.

Assistant Minister for Superannuation Senator Jane Hume did not respond to questions about changes to the minimum payments for superannuation income streams.

Lates News:
2020-03-18
Previous Post: Trump demands ‘thank you’ from Americans over coronavirus response despite downplaying it
Next Post: Coronavirus tragedy: Elderly dog dies after being released from virus quarantine