The consumer watchdog has launched a court action against swim school chain Jump alleging it misled its franchisees and seeking refunds potentially worth millions of dollars.

The Australian Competition and Consumer Commission (ACCC) filed documents to the Federal Court on Monday alleging marketing material used to promote Jump franchises was misleading particularly on the time it would take to build swimming pools for new franchisees. 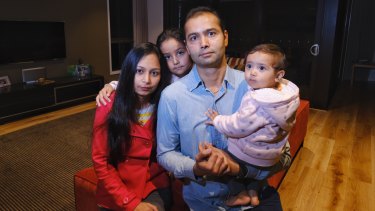 The ACCC alleges that Jump knew its claim that franchisees would get access to their pool within a year was incorrect.

"We saved for years to get something up, now that’s all gone," franchisee Kuljeet Mathur said on hearing the news. "Finally, at least we've got this."

The ACCC claims that as of March 2019 so 94 franchisees had paid money to the company and had still not received a swim school within 12 months.

The watchdog will allege Jump accepted payments typically between $150,000 and $175,000 and was aware, or should have been aware, that some of the builds would take more than 12 months.

Mr Mathur entered into a franchise agreement with Jump in August 2018 and previously told the Sydney Morning Herald and The Age he has been struggling to get a refund of $60,500 repaid after terminating the agreement when the only site Jump could find for a swim school was 37 kilometres from his home.

"I’ve heard so many worse stories [than ours]," Mr Mathur said on Tuesday, saying he is in social media groups with other franchisees who are waiting on their swim schools.

"I don’t have words for them." 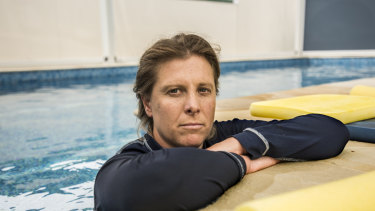 Juliet Sharpe is one of the franchisees who paid money to Jump but has not had a swimming pool built. Credit:Steven Siewert

Franchisee Juliet Sharpe said having the matter heard in court was the fairest process in her opinion.

"Some people say it's too late, but I don’t think so," she said.

ACCC deputy chair Mick Keogh says the watchdog has spoken to numerous franchisees over the past six months.

The court documents list Jump companies Jump Loops and Swim Loops holdings as well as Jump Swim founder and the director of the companies Ian Campbell.

Administrators were appointed to the Swim Loops company on May 6.

Mr Keogh said individual Jump franchisees had previously been unsuccessful in their action to recover funds from Jump when they had tried to argue against clauses in their franchise contracts.

The ACCC action will instead allege that marketing materials given to franchisees were misleading because they gave a strong suggestion pools would be built within a year.

"This action that we’ve initiated is based on claims that are made in the advertising brochures used to promote this," he said.

They gave, we allege, very strong indications you would have an operation open in 12 months.

"They gave, we allege, very strong indications you would have an operation open in 12 months."

The ACCC will be seeking injunctions, declarations, pecuniary penalties and refunds for franchisees.

Last week the watchdog were successful in an application in the Federal Court to freeze Jump Swim's assets.

This was done because of "concern that the likelihood was there may be some risk of assets being moved from Australia" which could affect franchisees seeking refunds, Mr Keogh said.

Jump Swim and Mr Ian Campbell have been contacted for comment but did not respond.