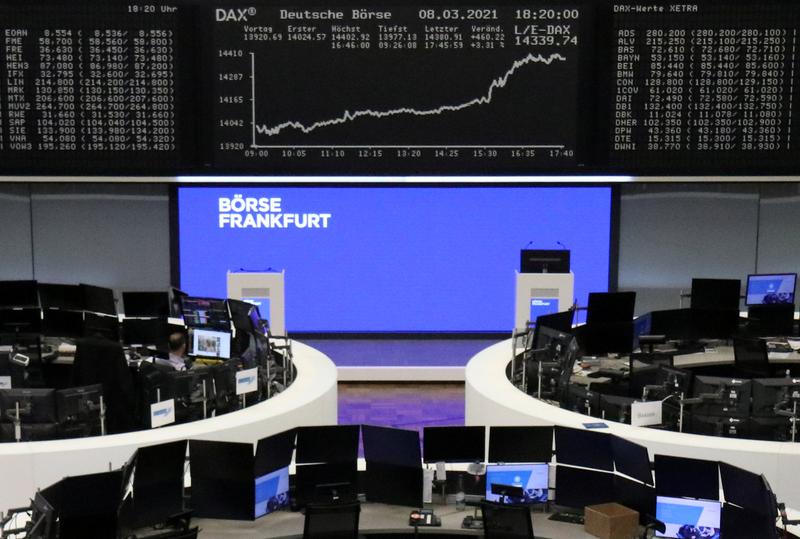 (Reuters) – European stocks ended Tuesday decidedly higher after extending gains from their best session in four months a day earlier, as a rise in shares of oil and utility companies helped counter losses in miners.

The continent’s stock markets have come under pressure as a jump in bond yields on the back of quick vaccine rollouts and a massive U.S. coronavirus relief package have fanned worries about a potential rise in inflation.

Still, major European indexes have fared better than some of their tech-heavy U.S. peers.

“European market is much less tech-heavy than the S&P 500, much less growth-dominated, so higher bond yields are not such a negative,” said Nick Nelson, head of European equity strategy at UBS.

“The speed of the move has been an issue … if we’re talking about a gentle rise in yields from here on, then that’s more manageable, and more cyclical parts of the market such as Europe would do better.”

The MSCI Europe value index, which includes banking, energy and auto stocks, have risen about 9% so far this year, while its growth counterpart that tracks tech and healthcare stocks is up 2%.

Miners fell 1.8% as Dalian iron ore futures tumbled by the 10% daily limit on anti-pollution restrictions in China’s top steelmaking city of Tangshan, while metal prices were also hit by a firm dollar.

Investors will closely watch a European Central Bank meeting later this week to see if policymakers have decided to step up the pace of emergency bond purchases to calm skittish markets.

“For the ECB, this will provide a challenging environment, with policymakers in Frankfurt both unwilling and unable to match the Federal Reserve’s dovishness,” said Stephen Innes, chief global market strategist at Axi.

Among other stocks, British insurer and asset manager M&G Plc gained 4.7% after it posted better-than expected 2020 operating profit in its first full year as a standalone company.