New York (CNN Business)Six months ago, Elon Musk said he would stop attending investor conference calls unless there was “something important” that he needed to say. He should have stuck with that plan.

After skipping Tesla’s third-quarter call, he returned to the call Wednesday to discuss fourth quarter’s record earnings and revenue. But his comments on this week’s conference call spooked investors despite Tesla’s successful financial results. Tesla (TSLA) shares had their worst day in months on Thursday, losing 11.6% and taking the other EV stocks down along with it.
Musk focused his comments on supply chain issues that had hurt Tesla far less than other automakers. Although Musk said Tesla was on path to be “comfortably above 50% growth in 2022,” and that the chip shortage is “better than last year,” he also noted the supply chain problem is “still an issue that could slow the rollout of new vehicles that had been expected as soon as this year.

He said plans for its Cybertruck, Tesla’s first pickup, would be pushed back to at least 2023, along with a new Roadster and a semi truck. He said he hopes Tesla will be “ready to bring those to production hopefully next year. That is most likely.”

That wasn’t what Tesla investors wanted to hear — especially as competition heats up: Upstart EV truck maker Rivian is already building and selling its electric pickup, which recently won Motor Trend Truck of the Year honors. Ford (F) is due to start building its F-150 Lightning EV in the spring and plans to produce 80,000 trucks a year to meet strong pre-orders. General Motors (GM) this week announced it would start building an EV version of its Silverado and Sierra pickups in 2024.

Some Wall Street analysts were frustrated by Musk’s comments on the call.
“There was no reason that he needed to double down and shout ‘supply chain’ into a crowded theater,” said Dan Ives, tech analyst at Wedbush Securities. “He gave the bears meat on the bones. That’s why the stock sold off. I’m convinced if Musk was not on the call, the stock probably would have been up on Thursday.”
None of Musk’s comments directly addressed the situation at other EV companies. But all the pure-play EV stocks fell sharply Thursday. Rivian fell 10.5% while Lucid shares tumbled 14.1%, and Chinese EV maker Nio (NIO) had its US shares fall 6.8%. Ives said Musk’s comments raised concerns that if an EV maker as big as Tesla is facing problems, its smaller upstart rivals could be suffering even worse.
Tesla shares are down 21% this year through Thursday’s close, and it has fallen below a $1 trillion market cap — a benchmark it hit late last year.
Even with the sell-off, which continued Friday, Tesla shares are worth more than the market value of the 10 largest automakers in the world, combined. That means Tesla has a valuation that many people think is unsustainable, making it more susceptible to sell-offs like the one Thursday, especially at a time that broader US markets are already in correction territory. 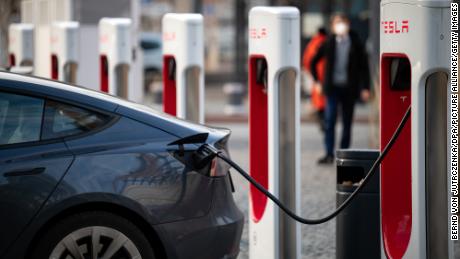 “Investors wanted confidence from Musk,” Ives said. “Instead they got him talking about supply chain and robots.”

Musk’s comments on the call were a stark contrast to Apple (AAPL) CEO Tim Cook’s performance on its call Thursday evening.
Cook also had very strong fourth quarter results to report, and like just about all manufacturing companies on the planet, is dealing with supply issues. But with Cook assuring investors, Apple shares were higher in Friday morning trading.
Source: Read Full Article