The efficacy of a standards code for the buy now pay later sector is being questioned with the association overseeing it acknowledging it can't force payments companies to sign up and adhere to it.

A draft code of practice for the booming instalment payments sector was released at the start of the week, with a flood of consultation expected on the draft rules. 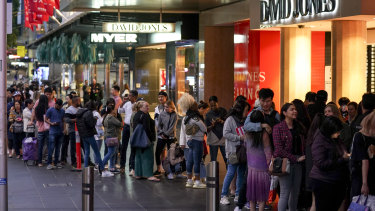 The voluntary buy now pay later code to protect consumers is set to start in the middle of this year. Credit:Eddie Jim

The rules have been made in consultation with the seven major Australian buy now pay later providers: Afterpay, Brighte, flexigroup, Latitude, Openpay, Payright and Zip Co. It is overseen by the Australian Finance Industry Association (AFIA).

"We have around 95 per cent of the buy now pay later market involved," AFIA chief executive Diane Tate said.

"This is a world-first code."

Ms Tate acknowledged not all instalment payment providers have been involved in the code's formation, however, and the group cannot compel new companies launching into the Australian market sign up. Signatories to the code must be paying members of AFIA. The association declined to outline the standard fees required for membership.

The code will be overseen by a compliance committee, though consumers who have issues with buy now pay later companies have to take these disputes to the Australian Financial Complaints Authority (AFCA) to be resolved.

Managing director of payments consultancy McLean Roche, Grant Halverson, said he doubted a voluntary code would protect consumers in the long run because there were limited consequences for breaches.

"I think the royal commission [into banking] showed how effective voluntary codes are," he said.

"We need more regulation in this area."

Ms Tate said AFIA would continue to communicate with new players coming on to the buy now pay later scene in order to encourage their participation.

Stockholm-based Afterpay rival Klarna launched into the Australian market on Thursday, with the Commonwealth Bank announcing it was upping its stake in the company by $296 million.

Klarna is not yet a member of AFIA, though the association said it had signalled it wanted to join and discussions were taking place.

Ms Tate said the code was a good starting point because it set a tone of expected behaviour amongst players in the space and brought together minimum behaviour standards for the first time.

"Industry codes are good for customers and good for business," she said.