‘Double whammy’: Super funds are set for their worst year since the GFC

Superannuation funds will take a hit from the recent turmoil on global financial markets, with the typical fund set to post negative returns in the worst performance since the global financial crisis.

Research house Chant West on Monday said that with less than two weeks until June 30, the typical super fund will fall by 5 per cent so far this financial year. A decline of that size would be the worst financial year for super funds since the global financial crisis, and the fifth negative result since compulsory super was introduced in 1992. 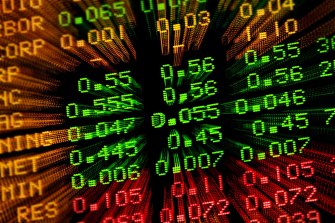 The typical super fund is expected to post negative returns, after sharp falls in Australian shares this month.Credit:Jim Rice

ChantWest defines a typical super fund as one with between 61 per cent and 80 per cent allocated to growth assets such as shares.

Chant West senior investment research manager Mano Mohankumar said big falls in global sharemarkets during June had hit super returns significantly, while bonds, which are traditionally seen as safer assets, had endured a tough year. This meant that even more conservative funds were also likely to post negative returns, Mohankumar said, as he also urged caution to anyone thinking about switching their super investment option.

“Bonds have not played the diversification role that they have in other periods of sharemarket weakness,” Mohankumar said.

Bond prices move inversely to bond yields, and yields have increased sharply as markets have bet on interest rate rises. This has caused losses in bond portfolios around the world.

Roger Montgomery, chief investment officer at Montgomery Investment Management, also pointed to the poor returns from bonds, with a Bloomberg index of bonds posting its worst annual returns since 1976.

“For 50 years, roughly, people have thought of bonds as providing protection and defensive characteristics,” Montgomery said. “Well this time they’ve gone down with equities, so everybody has been hit with a double whammy.”

Australia’s sharemarket had been a relatively strong performer in the early part of this year, but since the start of June it has tumbled about 10 per cent, as investors fretted over rising interest rates and the risk of a global recession.

Despite the slump, Mohankumar said fund members should remember that last year financial year super funds delivered bumper returns of almost 18 per cent, and he stressed it was risky to attempt to time the market and switch into more conservative assets.

“People need to see things in context. A negative result would be only the fifth in 30 years since the introduction of compulsory super in 1992,” Mohankumar said.

Montgomery said that unless there was global recession or some sort of financial crisis, he believed sharemarkets were “close to the bottom.”

AMP Capital chief economist, Dr Shane Oliver, said periodic sharemarket “corrections” were a normal part of investing in shares, and super funds tended to have high exposure to equities because the rolling 20-year return from Australian shares had been relatively stable and solid.

“Bouts of volatility are the price we pay for the higher longer-term returns from shares,” Oliver said.

Oliver said switching to a more conservative investment strategy whenever share prices fell sharply “just turns a paper loss into a real loss with no hope of recovering.”