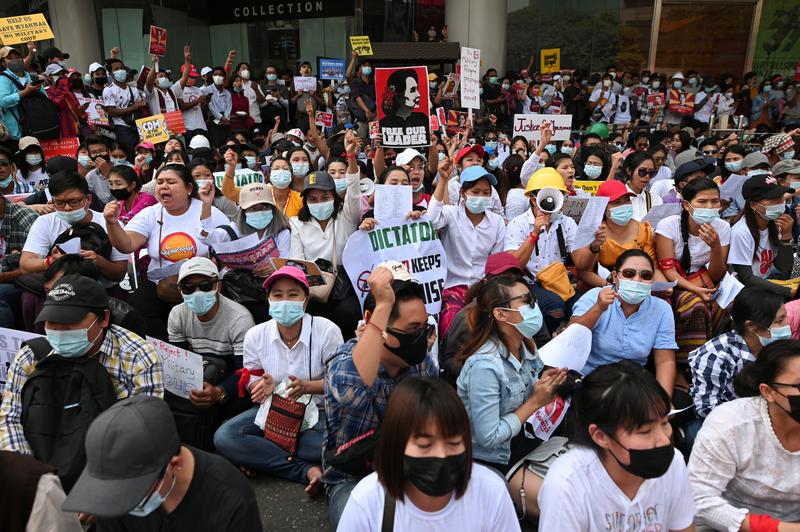 (Reuters) – The day the military seized power in Myanmar three weeks ago, Phyu delved into her company’s emergency funds and gave her staff a one-month advance on their salaries.

Factory workers hold placards and shout slogans as they rally against the military coup in Yangon, Myanmar, February 25, 2021. REUTERS/Stringer

Phyu, who runs a market research firm, saw trouble ahead then, but isn’t sure how she’ll pay her three staff next month.

Ahead of payday on Friday, the first since the Feb. 1 coup, a cloud is hanging over Myanmar’s fragile economy.

Its kyat currency is depreciating, businesses are paralysed and banks are in disarray, and for all the support for street protests and strikes against the junta, the disruption is nudging the economy closer to a breakdown.

“I predicted things could get worse so I paid them their salary in advance on that day,” said Phyu, who declined to provide her full name.

“I’m now thinking how to do March salaries if things continue to go this way or get worse. In the worst scenario, I can still pay them in cash.”

Hundreds of thousands of people have rallied for weeks across Myanmar, in a groundswell of anger at the military’s overthrow of the elected government of Aung San Suu Kyi, its curbs on the internet and the arrest of hundreds of activists.

The anti-coup movement’s calls for people not to go to work has caused big disruption, holding up crucial processes like import and export permits, salary payments and bank transfers.

Myanmar relies overwhelmingly on imports for its fuel, but supplies are running low, industry sources say, with some oil import terminals no longer operating.

Its nascent garment manufacturing sector, a key source of income for rural families, faces disruption in raw materials imports and the export of clothing, including orders from major western brands.

Some businesses have already been forced to slash wages.

“I didn’t receive any business this month so I can only pay them two thirds of their salary,” said a 33-year-old owner of a Yangon beauty salon, who asked not to be named.

“If they cannot get cash at ATMs, then I will pay them in cash. For March if things continue this way, I will have to reduce their salary to 50%.”

Many businesses have been closing to show support for the movement, or avoid being seen as backing the junta. Many have allowed employees to attend protests during work hours.

Bank services are irregular, with some branches closed, others reducing operations and limiting withdrawals.

“This is the movement organised by the staff alone,” said one striking employee of a private bank.

“We don’t like the dictatorship. We can’t accept it.”

Jared Bissinger, an economist who has specialised on Myanmar, said the crisis would likely lead to payroll problems, reduced wages and overtime and an increase in people borrowing money or selling assets.

A big worry, he said, was the textiles sector and the potential impact on hundreds of factories.

“I’m deeply concerned about where the economy goes and the vulnerability of a lot of people in Myanmar,” said Bissinger.

“This economic story and these economic challenges are going to become more front-and-centre in the coming months.”

Win Thein, 56, who runs an electrical store, said the economy was already struggling and would stay that way until the military hands back power in an election, as it has promised.

“This coup makes it worse. The economy has plummeted to zero. Nothing is turning out to be good,” he said.

Some in Myanmar no longer have work and are focusing only on protests.

“We want to repel the dictatorship as soon as possible and we are putting all of our efforts into it.”