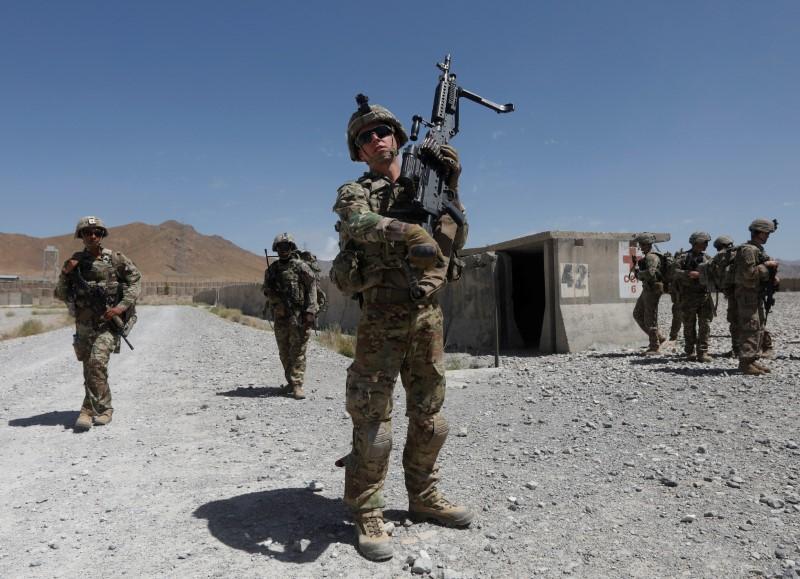 WASHINGTON (Reuters) -President Joe Biden declared on Wednesday he plans to end the longest U.S. war and that it is “time for American troops to come home” from Afghanistan, as he looks to close out 20 years of U.S. military involvement there even as critics warn that peace is not assured.

In a White House speech, Biden set a goal of withdrawing all 2,500 U.S. troops remaining in Afghanistan no later than Sept. 11, with the final withdrawal beginning on May 1. By pulling out without a clear victory, the United States opens itself to criticism that a withdrawal represents a de facto admission of failure.

“I am now the fourth American president to preside over an American troop presence in Afghanistan. Two Republicans. Two Democrats,” Biden said. “I will not pass this responsibility on to a fifth.”

“It is time to end America’s longest war. It is time for American troops to come home,” he said.

Sept. 11 is a highly symbolic date, coming 20 years to the day of al Qaeda’s attacks on the United States that prompted then-President George W. Bush to launch the conflict. The war has cost the lives of 2,400 American service members and consumed an estimated $2 trillion. U.S. troop numbers in Afghanistan peaked at more than 100,000 in 2011.

Meeting NATO officials in Brussels earlier, Secretary of State Antony Blinken said foreign troops under NATO command in Afghanistan will leave the country in coordination with the U.S. withdrawal by Sept. 11, after Germany said it would match American plans.

Blinken also spoke by phone with Pakistan’s army chief on Wednesday and discussed the peace process, according to a statement from the media wing of Pakistan’s military.

Afghan President Ashraf Ghani wrote on Twitter that he has spoken with Biden and he respects the U.S. decision. Ghani added that “we will work with our U.S. partners to ensure a smooth transition” and “we will continue to work with our US/NATO partners in the ongoing peace efforts.”

The Democratic president had faced a May 1 withdrawal deadline, set by his Republican predecessor Donald Trump, who tried but failed to pull the troops out before he left office. Biden’s decision will keep troops in Afghanistan past that deadline, but officials suggested troops could fully depart before Sept. 11.

There is a summit planned about Afghanistan starting on April 24 in Istanbul that is due to include the United Nations and Qatar.

The Taliban, ousted from power in 2001 by U.S.-led forces, said it would not take part in any meetings that would make decisions about Afghanistan until all foreign forces had left the country. Taliban spokesman Zabihullah Mujahid on Wednesday called on the United States to adhere to the deal the group reached with Trump’s administration.

‘FIND A WAY TO COEXIST’

In Afghanistan’s capital of Kabul, officials said they would carry on with peace talks and their forces defending the country.

“Now that there is an announcement on foreign troops withdrawal within several months, we need to find a way to coexist,” said Abdullah Abdullah, a top peace official and former presidential candidate. “We believe that there is no winner in Afghan conflicts and we hope the Taliban realize that too.”

U.S. officials can claim to have decimated al Qaeda’s core leadership in the region years ago, including tracking down and killing the group’s leader Osama bin Laden in neighboring Pakistan in 2011. But ties between the Taliban and al Qaeda elements persist and peace and security remain elusive.

Successive U.S. presidents sought to extricate themselves from Afghanistan, but those hopes were confounded by concerns about Afghan security forces, endemic corruption in Afghanistan and the resiliency of a Taliban insurgency that enjoyed safe haven across the border in Pakistan.

There is concern over the impact a withdrawal would have on human rights in Afghanistan given the gains, particularly for women and girls, during the past two decades.

“I am worried about my future,” said Wida Saghar, a writer and women’s rights activist in Kabul. “An unknown future awaits us, when foreign forces leave and the civil war intensifies … then who will think about women’s rights? Who will care about us?”