Few active managers have the chops to match Aram Green when it comes to growth investing.

Over the past five years, his Select Strategy fund has outperformed 96% of its competitors.

Business Insider recently spoke with Green about which positions he was adding to in the fund. He shared with us six stocks that he believed had strong secular growth prospects over the next decade, some of which have cyclical tailwinds behind them as the economy recovers.

"I think these companies are five- to 10-year winners dominating their space. Profitability is going to grow through the roof for these businesses," he said in a December 23 interview.

"They did not take their foot off the accelerator — maybe pumped the brakes in March when the world was coming to an end, when no one really knew what was going on — in investing in R&D in Q2 and hiring sales and marketing people," he added. "And that original sort of 'we don't know what the world looks like' quickly turned into opportunity for us."

The six stocks are listed below, with Green's commentary on each. 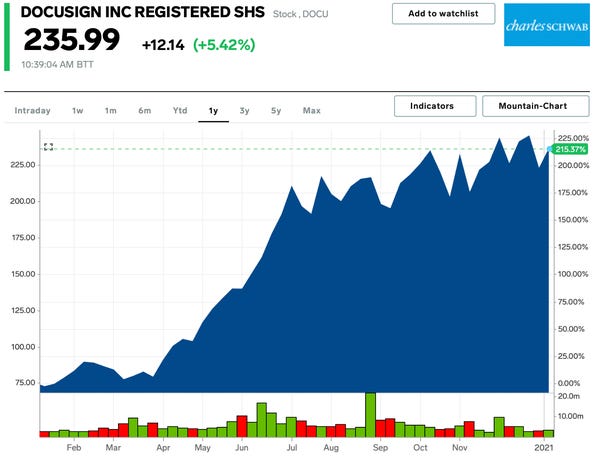 Green's commentary: "We haven't sold a single share of DocuSign. Actually we bought more this fall. And the earnings and the sales revisions have gotten ratcheted higher, and the stock has gone up, but the multiple really hasn't changed. So we haven't seen much multiple inflation, even though the numbers have gone higher. The stock has just kept up with the growth. And I think that's what you see next year.

"The stock has seen big revisions in terms of the underlying revenue and billings trajectory — that was a company that was growing 30% heading into COVID, and now revenue billings growth is in the 50 to 60% year over year.

"And one of the promises of DocuSign is they have an expansion opportunity within their addressable market, almost double the size, by expanding just beyond their core e-signature offering to offer a contract life-cycle-management solution, which has integrated artificial intelligence and machine learning, to have business insights and manage the entire life cycle of a contract as it sits within an enterprise or government agency." 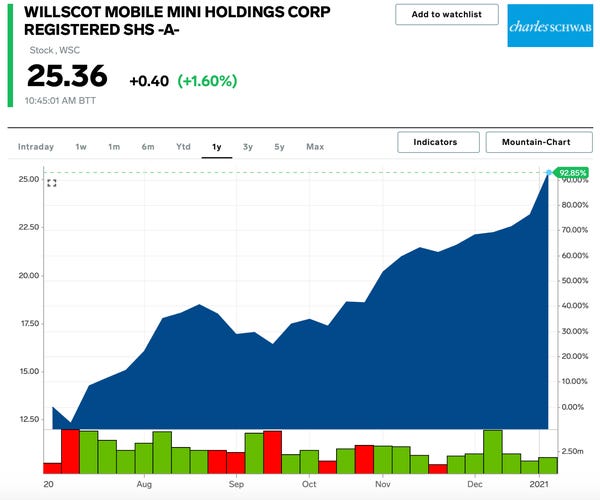 "In the past you'd have a very competitive landscape where there were a number of private price aggressors in the market, and WillScot has consolidated that market. And so we're coming into a very rational market at a time that we're going to see volumes improving. So it's a really attractive asset.

"They buy these modular facilities and containers in portable storage. They have a useful life of 20 years, the [internal rates of return] are 20 to 30% per year. They're selling more value-add offerings inside, which sounds pretty simple, but they're putting refrigerators in there, shelving, and lighting — all stuff that a customer would need to put in there. So that adds an extra 5 points of IRR on their investment.

"You have a cyclical tailwind to the business as there's an economic reopening, more construction. Any infrastructure bill we see, etc., is going to give a boost to the underlying growth trends in the industry. So I think you have a lot of idiosyncratic things going on within this industry and this company, and then you add on the cyclical element too. We think there's considerable upside.

"We think it could be a double over the next couple of years." 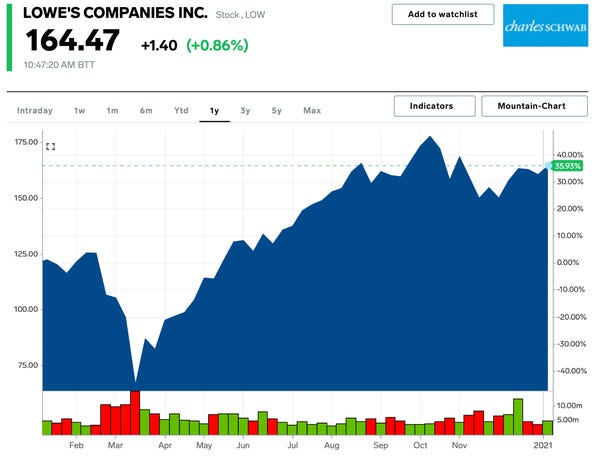 Green's commentary: "The stock has done well, but it's not been due to multiple expansion, it's been the earnings coming through.

"We see a business that EPS can compound in midteens plus the next couple years. Margins were 9% last year; we see them going to 12% plus as they comp at higher rates. They're bringing the COVID costs down. They're reaping the benefits of the supply chain costs. They've invested in their digital effort. They've invested behind pro. And you have a business trading at 17 times earnings, which is below the market, and Home Depot that trades at low 20s — 21 times, 22 times. So I think you could have a multiple catch-up that's coming through the fundamentals as management gains more credibility.

"There were all these headwinds that turned into tailwinds. … We've seen the numbers on home sales, and I think that has legs going into 2021 as we see all of these people that just bought new homes and continue to buy homes as we speak, they're going to be putting more money into their homes." 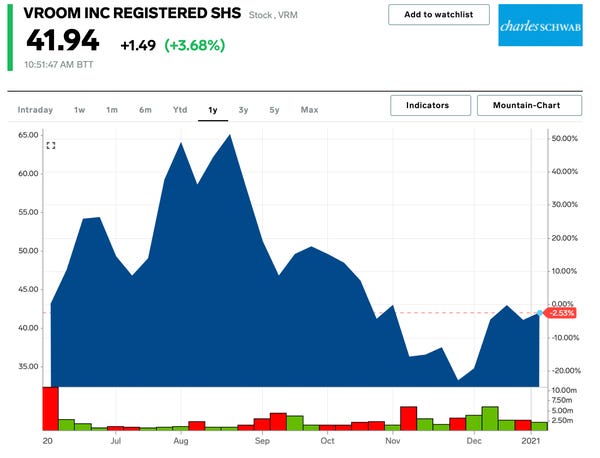 Green's commentary: "It's a really hot used-car market right now, but that is a market that — call it a $650 billion market where the largest player nationally is CarMax with less than 2% market share. And in the digital space, we are less than 1% penetrated, and so we just think we're in really early days of customers buying their car digitally.

"And that is going to continue for many, many years in an industry that is very fragmented, where the current user experience of going onto a used-car lot and buying a car is very low — very low hurdle to jump over.

"Carvana owns all their reconditioning centers. They own all their carriers that distribute cars to their customers' homes, and Vroom has taken a more hybrid approach of like, 'We're going to own some of it, but we're also going to leverage players in the industry like a manhunt to do the reconditioning for us.'

"The CEO of Vroom is the former CEO of Priceline … I think he really understands the customer-acquisition element of it and managing a marketplace." 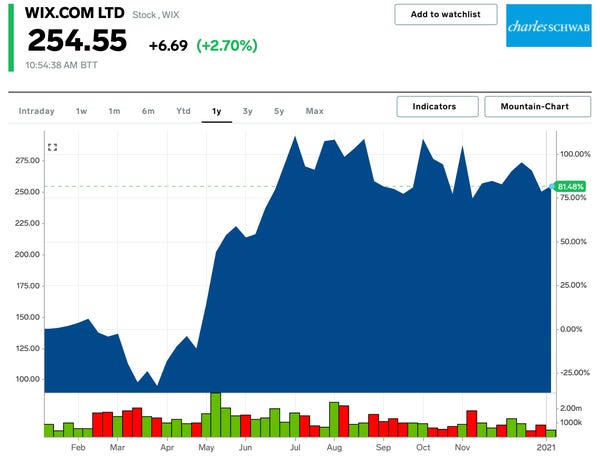 Green's commentary: "They have been very innovative. It's been pretty much an entirely organic growth story starting in do-it-yourself website-development tools.

"You have all these avenues of additional growth that weren't around three years ago.

"The importance of having a very powerful digital experience to connect with the customers or users, as well as conduct commerce online, is just critical. How can you have a business without that these days? And I don't think that's just a COVID thing. It was in place ahead of COVID, but we just saw this acceleration. 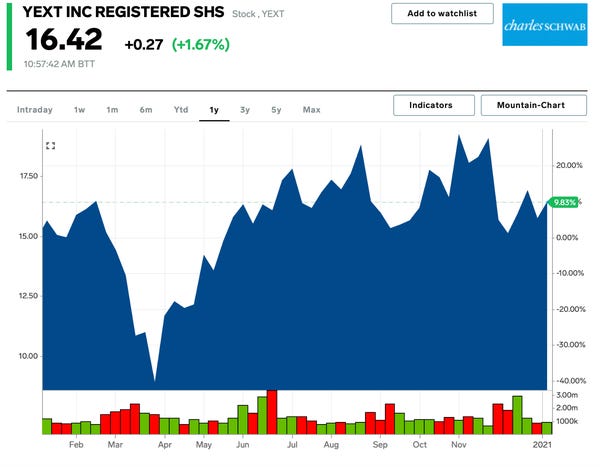 "The stock's really not gone anywhere in many, many years; it trades at a low multiple. They started to get going pre-COVID. The stock got clobbered again in COVID. They've got a lot of innovation, so I'm very optimistic that it's only a matter of time before this clicks, or someone like a Salesforce, Adobe — someone will want to own this asset, and it's trading at half to a quarter of valuation of acquisitions we've seen take place in the software space. So I just don't see a lot of downside. It's minimal downside, with the opportunity to have a double over the next three years."