Litecoin price traded higher but it could not break the $260 resistance against the US Dollar. LTC/USD is currently correcting lower towards the $210 support level.

This past week, we discussed the importance of the $255 resistance in litecoin price against the US dollar. The LTC/USD pair recently traded higher and moved above the $250 level, but there was a major rejection noted from the $260 level.

It seems like the pair was completely rejected from the $255-260 resistance area. It declined sharply and formed an inverted hammed candle, suggesting a major decline from the $261 high. During the slide, the pair broke the $225 support and is currently heading towards the 100 hourly simple moving average. 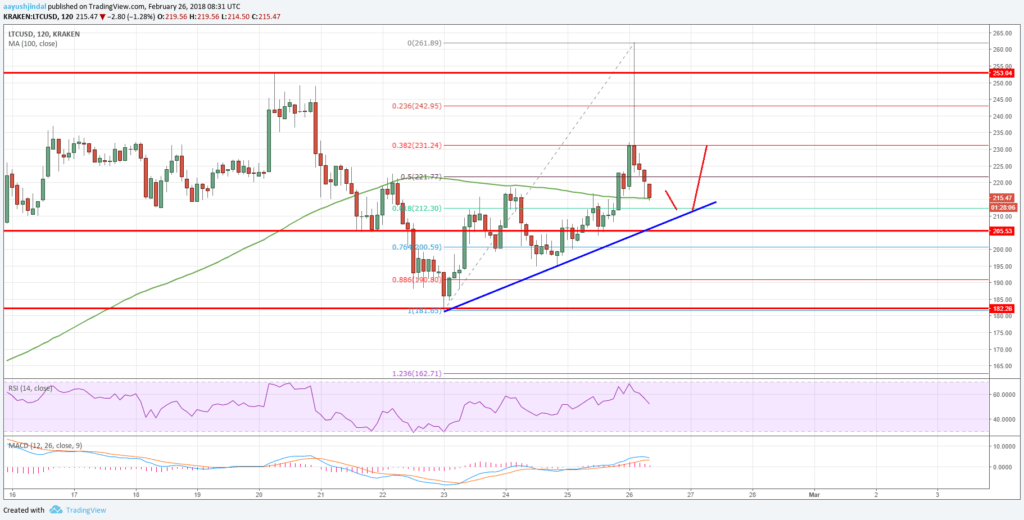 It broke the 50% Fib retracement level of the last wave from the $181 low to $261 high. Therefore, there are chances of more declines below $225. On the downside, there is a major bullish trend line forming with support at $212 on the hourly chart of the LTC/USD pair.

Below $210, there is a risk of a breakdown below the $200 level. On the upside, an initial resistance is around the $225 level. The mentioned $225 level was a support recently, and it may now act as a resistance. Above $225, the price may move towards the $240 level, which is the next key resistance.

Trade safe traders and do not overtrade!