The Ripple project continues to hold the #3 ranked position by market cap, as it presently holds an $18.02 billion market cap value.

Ripple is certainly a project that is hard to ignore, with projects such as the World Bank and the IMF involved. Ripple also recently reversed against Bitcoin, which has helped the recent price increase. Ripple has been consistently falling against Bitcoin all year from a high around 9,500 SATS, recently hitting a low around 4,000 SATS. The ETH/BTC market similarly found support at 4,000 SATS and has now rebounded back above 5,300 SATS.

Let us take a look at price action for Ripple and highlight some areas of resistance on the way up toward $1.00. 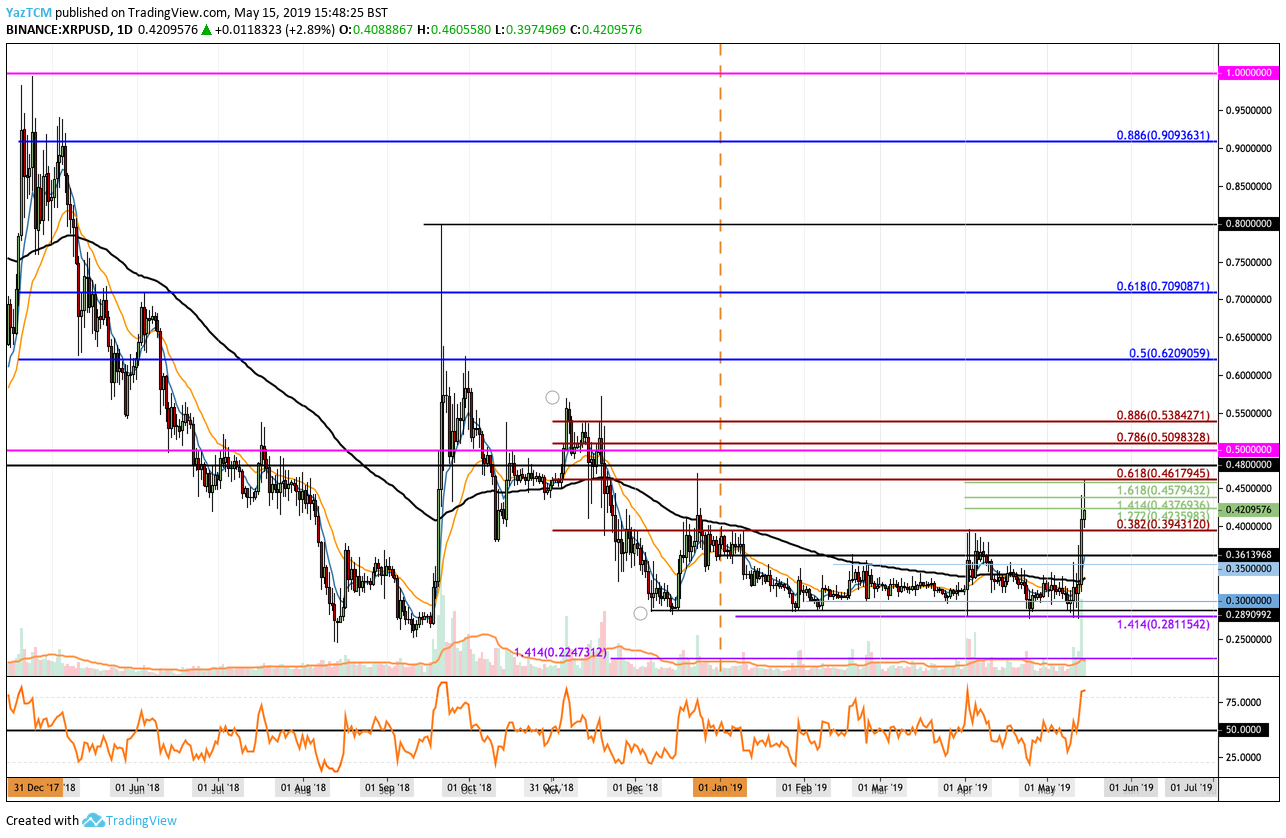 What Has Been Going On?

We can see that throughout 2019, Ripple has been trapped in the range between $0.39 and $0.28. The cryptocurrency has been unable to break beyond this range and has been trading sideways for this entire period.

However, the recent price surge has now allowed XRP/USD to break above the 100-day moving average level and continue to smash further above the $0.40 upper boundary of the price range. We can see that Ripple has now climbed further beyond $0.40 to where it is currently trading at resistance around $0.4235, provided by a short-term 1.272 Fibonacci Extension level (drawn in green).

What Is the Current Short and Long-Term Trend?

Presently, the short-term trend is now bullish after the break above the 100-day moving average and the $0.40 resistance level. For this bullish trend to be invalidated, we would need to see a fall of XRP/USD beneath the $0.35 level.

In the long term, the trend is still not bullish until price action can rise 2x from the bottom price. If we take $0.28 as the bottom for XRP/USD, then the market cannot be considered bullish until it breaks above the $0.56 level.

Where Is the Resistance on the Way Toward $1.00?

If the buyers can continue to climb further higher above $0.45, we can expect immediate resistance above to be located at the short-term bearish .618 Fibonacci Retracement level (drawn in red), priced at $0.4617. This bearish Fibonacci Retracement level is measured from the November 2018 high to the December 2018 low. Above $0.47, further resistance is then expected at the $0.48 and $0.5 levels.

If the buyers continue above $0.5, further resistance is then located at the short-term bearish .786 and .886 Fibonacci Retracement levels (drawn in red), priced at $0.5098 and $0.5384, respectively. If the bulls can continue to break beyond $0.56, then the long-term trend can be considered as bullish.