For years there’s been talk of nanorobots repairing red blood cells from inside our artery walls.

As computers get smaller and more intelligent, they’ll find their way into every nook and cranny of our society. Supercomputers that used to take up an entire room are now outperformed by phones that fit in our pockets.

On top of that, all these devices are connected to each other, beaming information to space and back. We’ve entered an entirely new world, and there’s a lot of people working very hard to bring to fruition what’s being called the Internet-of-Things (IoT).

IoT and blockchain technology are simply meant for each other. Both were created specifically to operate using a decentralized network of computers spanning the globe. Both also have the opportunity to explode in value in the near future, and by the virtue of some of the projects listed in this article, it’s likely they’ll both rise in lockstep.

According to Bain, a massive global management consultancy: 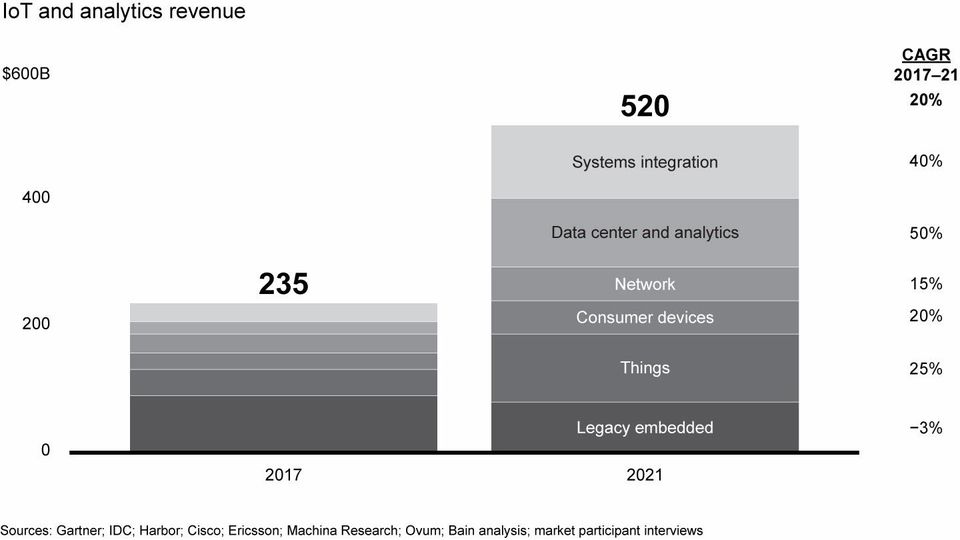 Data center analytics and systems integration are forecasted to contribute to a majority of the growth, which are segments of the IoT industry that blockchain projects could influence directly. Combine this information with a few positive bull run arguments, and projects that have established their focus on the IoT could be some of the best picks on the market today.

Here are 4 IoT crypto projects making headway in Q1 2019, ranked by market cap at the time of writing. 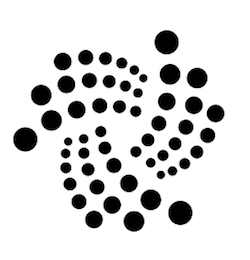 IOTA is likely the top IoT crypto project. One of their biggest differentiators is the fact that they’re not strictly built on blockchain, but a technology called the Tangle. Nevertheless, IOTA has caught the attention of massive global corporations like Bosch, the World Trade Organization, and Volkswagen. They’ve also partnered with the city of Taipei, and together they’ve begun the smart city upgrade process.

Volkswagen’s interest in IOTA was solidified in February 2018 after the announcement of their partnership, and in September 2018 the duo announced they’d be launching a Digital CarPass in early 2019.

The computer systems in cars have been improving steadily since they were combined, but this will be the first major implementation of blockchain and IoT being used to improve the performance of automobiles.

Installing an IoT protocol under the hood of your car would allow for real-time data analysis, potentially leading to a number of improvements. For example, issues with your engine could be detected almost immediately, followed by your navigation system directing you to the nearest auto shop. Also, flaws would be found quicker, and recalls would become safer.

Mentioned above, the Digital CarPass launch in Q1 2019 will serve as a trial for IoT applications in the automobile industry, and Volkswagen is not alone.

BMW, Ford, General Motors, and more have partnered with MOBI. According to IBM, another MOBI partner,

“MOBI is a new consortium for blockchain innovation in the mobility industry.”

If all goes well with Volkswagen, IOTA is setting themselves up to be the go-to blockchain IoT provider for millions upon millions of vehicles around the world, and their partnership with MOBI would give them a direct connection to other companies like Bosch, Hyperledger, and VeChain. 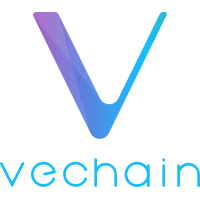 VeChain has proclaimed their mission for 2019 to grow transactions based on value provided to businesses, and to build infrastructure around their blockchain. According to their blog, this equates to “growing and enabling enterprise applications and dApps supporting real business activities.”

VeChain has started 2019 by expanding their list of business partnerships and releasing development updates to their mainnet.

DNV GL is an international accredited registrar based in Norway that works closely with the United Nations, with an estimated annual revenue of $19.5 billion. Their partnership with VeChain was announced at the end of January 2019.

Collaborating with VeChain will allow DNV GL to improve supply chain transparency, traceability, and efficiency. They’ll be targeting the food and beverage, fashion, and retail industries initially, with plans to expand to the aerospace and automotive industries thereafter. Ultimately, both partners intend this move to empower consumers. Sunny Lu, CEO of VeChain, states:

Together, we combine assurance and blockchain to help customers improve trust in their products across multiple dimensions; from quality and safety to performance aspects.

In a recent blog post, VeChain introduced improvements to Sync, their desktop wallet, and Connex, a standardized interface for connecting dapps to their blockchain.

The launch of New Sync v1.0 is paving the way for a serverless VeChain explorer called Insight, a contract deployment tool called Inspector, and the Energy Station, a dapp which allows users to exchange VTHO and VET on the testnet. New Sync v1.0 will also serve as a blockchain explorer and integrated wallet.

Connex allows VeChain developers to easily build dapps by providing a well-designed set of APIs. Compared to web3.js, an Ethereum JavaScript API, Connex’s methods are streamlined and lightweight. However, according to this blog post, VeChain “will continue the support for web3.js to lower the barrier for developers.” 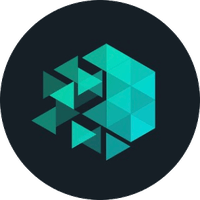 IoTeX is an IoT-friendly blockchain with a strong focus on private blockchain applications.

While their 2018 focused on building the foundation of their company, 2019 is the year they plan to really launch.

The network’s consensus algorithm is randomized delegated proof of stake, or Roll-DPoS. IoTeX describe it as:

A more democratic version of delegated proof of stake with high throughput, instant finality and high resilience to network attacks.

In an early January 2019 announcement, IoTeX revealed the requirements for their Delegates Program, which puts their ecosystems in motion, as well as the planned launch of their Mainnet Alpha, and a major exchange listing.

IoTeX believes their delegates need to stem from deep roots within their community, showing dedication to making the ecosystem prosperous and fair. The announcement lays out IoTeX’s guiding principles, chiefly that the governance of the entire network will be based on: 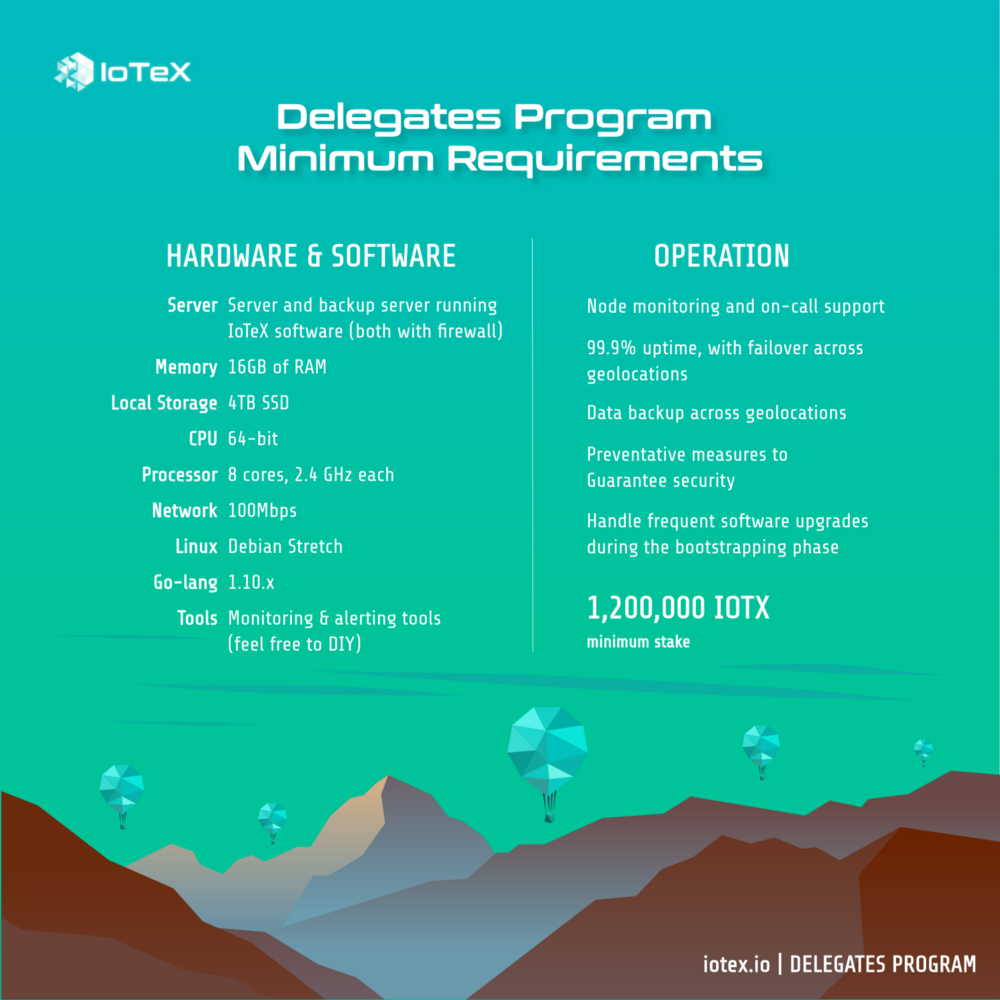 Delegates are required to maintain a minimum level of technical operational efficiency, outlined in the infographic above. Aside from the behavioral and technical requirements, delegates will need a minimum stake of 1,200,000 IOTX tokens. It’s worth noting the minimum amount is subject to change as the ecosystem grows.

They’ve already managed to acquire 80 applicants from investors, community members, media outlets, and more, and fine-tuning the program will be the main focus of Q1 and Q2

For more information on their Delegate Program, check out their Reddit AMA video below.

IoTeX also recently announced their token’s listing on Bittrex, a major cryptocurrency exchange, with rumors of an upcoming UPbit listing. Also, the Korean exchange Allbit is currently hosting a contest that will list the top 3 most-voted tokens on their exchange. IoTex is incentivizing votes by “covering the costs” for voting, which you can do here. 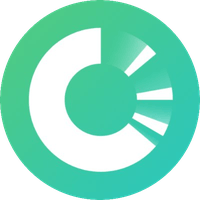 OriginTrail focuses on the interoperability between different stages in supply chains in order to increase the efficiency and profitability of the entire chain. The current method for managing supply chains leads to the formation of centralized data silos, which makes parts of the manufacture process inaccessible to the rest of the chain.

The OriginTrail team has been able to establish a number of use cases, as well as significant partnerships that serve the goal of international compatibility. One of their most notable partners is Oracle, which pulled in an estimated $39.8 billion in revenue during 2018.

On their well-kept and frequently updated roadmap, OriginTrail has already accomplished another partnership in late January 2019, with plans to release a new version of their mainnet before Q2 2019.

OriginTrail is aiming to align themselves with established business standards, in order to streamline their international adoption. Added to their list of business-standardizing partnerships is the British Standards Institution (BSI).

According to the announcement blog post, OriginTrail’s partnership with BSI:

Will focus on delivering blockchain-enabled solutions that will enhance its global assessment, certification and supply chain services to confirm the provenance of goods and/or the integrity of digital records or services.

OriginTrail launched their current mainnet version, Vostok, in December 2018, and plan to launch the next stage in Q1 2019.