Some Ethereum Coins Are Being Accumulated By Whales

Ethereum and top altcoins have undergone strong retracements from their summer highs. ETH, for instance, dropped from $490 to the September lows of $310 while some smaller altcoins saw even worse corrections.

DeFi coins, especially, were hit hard by this market drop. An analyst noted that the average DeFi coin had dropped 65% from its summer highs by early October.

This was because DeFi coins rose faster than all the rest, meaning they were the first to drop when capital stopped flooding in from new investors. They also dropped the fastest as earlier investors were incentivized to dump their coins as fast as possible.

Even still, Ethereum-based altcoins remain in a bullish state as investors seek to look out in the long run and invest from that perspective.

Top blockchain analytics firm Santiment reports that whales have been investing heavily in Ethereum and some ETH-based altcoins. These include REN, Chainlink, Aelf (ELF), Kyber Network (KNC), and 0x (ZRX).

“With most eyes on #Bitcoin’s market price between this $12.7k and $13.3k range, whales of many respective $ETH-based #altcoins have added to their non-exchange bags. $ETH, $LINK, $REN, $ELF, $KNC, & $ZRX are among those recently hitting one-year highs.” 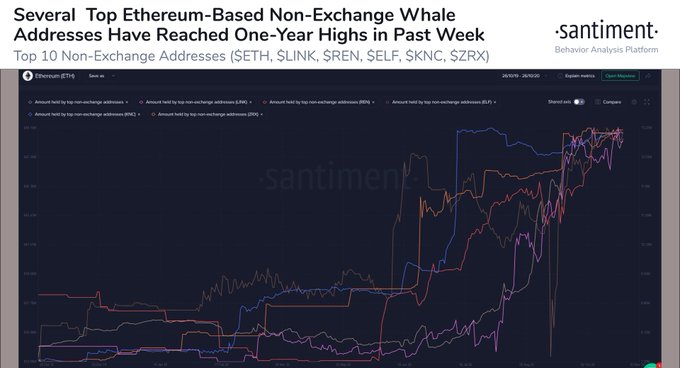 Focus on the Macro Fundamentals

It is likely that these investors are focusing on the long-term prospects of Ethereum’s DeFi space as opposed to the short-term reality.

For one, head of DTC Capital Spencer Noon reported recently that the important DeFi metrics continue to hit new all-time highs despite the price drops:

“Despite a month that saw most tokens fall 50% or more, #DeFi is *still* at ATHs with its most important indicators: – TVL: $12.41B – ERC20 Stablecoins: $14B Don’t listen to the degens who burned out. Phase 2 of this #DeFi bull market will make this summer look like nothing. The likely inflection point for DeFi Bull Phase 2 is the election, where there are multiple outcomes that would be favorable for risk assets. Until then, farmers will sit in #BTC b/c it’s low-maintenance and basically a stablecoin compared to what they were trading this summer.”

There also remain many bullish on Ethereum DeFi due to the high yields of the space relative to traditional markets. Of course, yields are naturally higher due to more risk, but analysts think that these yields will entice lots of capital into the space.