ERC-20 ‘flips’ Ethereum – Here’s what you need to know

After reporting tremendous gains during the rally, Ethereum has also succumbed to the correction setting in the crypto market. The second-largest digital asset has lost approximately 26% of its value in September, and this was one of its many problems. According to data provider Santiment, the ERC-20 market cap has ‘flippened’ the ETH market cap. 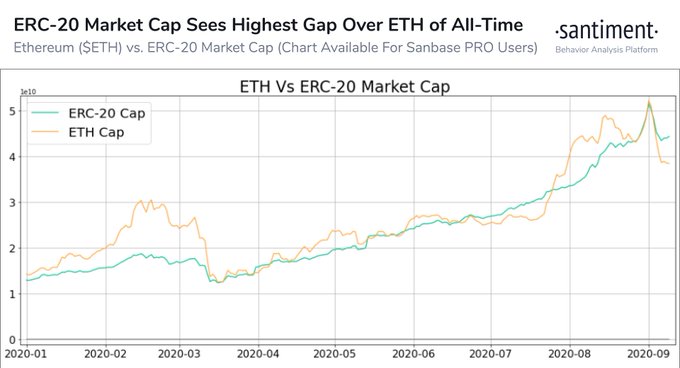 As September once again sees the ETH market consolidate after a steep fall, ERC-20’s market cap has ended up noting an increase in market cap. This has been the highest market cap difference of ERC-20 coins over ETH of all time. However, the growth that drove the ERC-20 market cap was also decentralized finance [DeFi], which also witnessed a drastic hit in the total value locked.

According to data provided by DeFi Pulse, the TVL was at a peak of $9.6 billion on 2 September, but as the sell-off escalated and ETH value dropped, the TVL reached a low of $6.11 billion.

Researchers from Arcane believed that the Sushi Protocol uncertainty affected the entire DeFi ecosystem leading to the TVL collapse by nearly 17%.

Despite the fall, the ERC-20 tokens and the DeFi market were once again on a bullish path. Tokens like LEND, ELF, SNX, and REN were surging due to a spike in address activity which could be an indication of the bullishness in the market. Although DeFi has also been a direct contributor to the rising ETH gas cost, its ecosystem has not yet been impacted but once again highlighted the scalability issues of Ethereum.