US pork exports to China skyrocketed before fears of meat shortage

Americans are lining up to stock up on meat as stores begin rationing supply. FOX Business’ Grady Trimble with more.

Get all the latest news on coronavirus and more delivered daily to your inbox. Sign up here.

U.S. pork exports to China have skyrocketed since the end of 2019 after much of China's pig population was destroyed by an African swine fever epidemic.

That number was expected to stay high after China agreed to buy billions of dollars of pork a year under President Trump's phase one trade deal. Now, U.S.-China tensions caused by the coronavirus outbreak may throw off such an agreement.

Meanwhile, a bottleneck in pork processing caused by pandemic-related plant closures is forcing farmers to kill off their healthy livestock without sending it to the market. Officials have estimated that about 700,000 pigs throughout the United States can’t be processed each week and must be euthanized. Most of the hogs are being killed at farms, but up to 13,000 a day also may be euthanized at a pork plant in Worthington, Minn.

China produces and consumes two-thirds of the world's pork, but its supplies plunged as authorities destroyed pigs and blocked shipments to contain an outbreak of African swine fever that was confirmed in August 2018. Chinese farmers have allowed herds to dwindle. 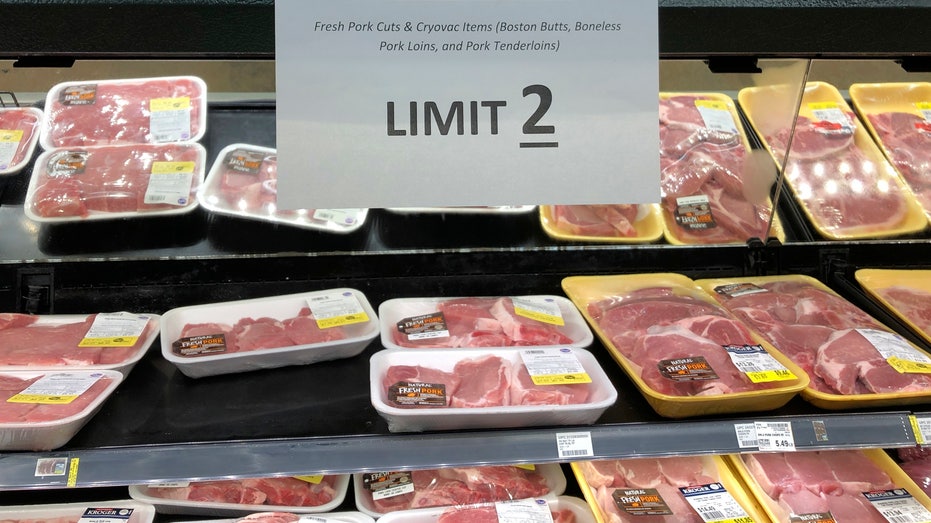 A sign at a Kroger store in Atlanta limits shoppers to two packages of pork on Tuesday, May 5, 2020. (AP Photo/Jeff Amy)

U.S. pork exports to China have been elevated since November 2019, before coronavirus outbreaks forced closures at meat processing plants throughout the country. Supermarkets have been limiting shoppers' meat purchases since April.