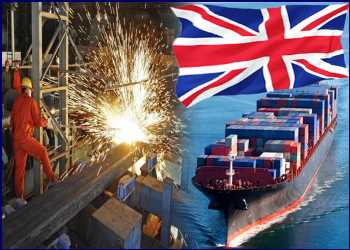 The UK economy shrank for the second straight month in April after services, construction and production contributed negatively for the first time in more than a year, the Office for National Statistics said on Monday.

Gross domestic product fell unexpectedly by 0.3 percent on month, faster than the 0.1 percent drop in March. This was the second consecutive contraction. GDP was forecast to grow 0.1 percent.

On the production-side, services declined 0.3 percent on month, which was the main contributor to April’s 0.3 percent fall in GDP.

The decline in services reflects a large 5.6 percent decrease in human health and social work, where there was a significant reduction in NHS Test and Trace activity, the ONS noted.

Further, industrial production contracted 0.6 percent in April, driven by a fall in manufacturing of 1.0 percent, as businesses continued to report the impact of price increases and supply chain shortages.

The construction sector shrank 0.4 percent in April, following strong growth in March when there was significant repair and maintenance activity following the storms experienced in the latter half of February.

This was the first time that all main sectors, namely services, production and construction contributed negatively to a monthly GDP estimate since January 2021.

GDP increased 0.2 percent in the three months to April, with construction contributing 0.2 percentage points, while services and production were broadly flat.

It is too early for the full drags from higher inflation and interest rates on activity to have been felt, Paul Dales, an economist at Capital Economics, said.

So GDP will remain weak over the coming quarters and a recession cannot be ruled out, the economist noted. This may tilt the Bank of England towards continuing to raise rates by 25 basis points on Thursday.

Another report from the ONS showed that the visible trade deficit narrowed more-than-expected to GBP 20.89 billion from GBP 23.89 billion in March. The expected level was GBP 22.5 billion.

Total imports of goods grew 0.7 percent in April, because of increasing imports from EU countries, while non-EU imports decreased. At the same time, total exports of goods advanced 7.4 percent, with increases in shipments to both EU and non-EU countries.

The overall trade shortfall was GBP 8.5 billion versus a GBP 11.55 billion deficit a month ago.