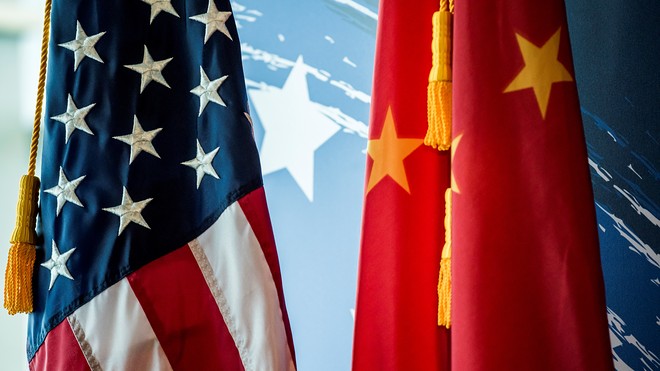 Stocks rose Thursday in volatile morning trade after a bullish earnings report from Walmart, the world’s largest company by revenue, along with a jump in U.S. retail sales in July, underscored the health of the U.S. consumer.

Overnight stocks had added to Wednesday’s sharp losses when China threatened unspecified retaliation against President Trump’s threat to impose more tariffs on its imports from September.

The Dow Jones Industrial Average posted its worst session of the year on Wednesday in the wake of weak economic data from China and Germany and the U.S. Treasury yield curve inverted, sending a recession signal.

Stocks were slammed Wednesday after the yield on the 10-year U.S. Treasury note TMUBMUSD10Y, -1.33% briefly traded below the 2-year Treasury note yield TMUBMUSD02Y, -2.33%, marking an inversion of the yield curve. Such phenomena are viewed as an often reliable recession warning signal, albeit often with a lag of more than a year.

Earlier Thursday stock futures fell after the Chinese government said in a statement that it would take unspecified, “necessary countermeasures” if the Trump administration’s planned tariffs of 10% on roughly $150 billion in annual Chinese imports goes into effect Sept. 1.

Beijing made no mention of the Trump administration’s decision to postpone a 10% levy on the final $150 billion in imports until mid-December that have thus far avoided new import taxes, announced Tuesday.

Stock futures rebounded, however, after Dow component Walmart Inc. WMT, +4.79%reported better-than-expected, second-quarter earnings and same-store sales growth, while projecting that it would grow sales at already existing stores by between 2.5% and 3% in 2020. Shares in the retailer rose 6.7% Thursday.

“It’s hard to get a comprehensive economic perspective from a single company but if we were going to do that with Walmart, we would say it’s flat out impossible the economy is falling apart,” wrote Justin Walters, co-head of research at Bespoke Investment Group, in a Thursday note.
“The company’s 5,358 US locations are simply too big of a footprint to avoid a major consumer spending slowdown. On tariffs, the CFO noted ‘no impact on consumer demand so far’”.

Further reinforcing the narrative of a strong U.S. consumer were data on retail sales for the month of July, which rose 0.7%, well above the 0.3% expected by economists polled by MarketWatch. Sales at internet retailers soared 2.8% from June, a gain that may be tied to many sales offered by Amazon.com Inc. AMZN, +0.77% for its Prime Day promotion, along with those from online competitors.

Also potentially helping reverse earlier losses was a comment from Hua Chunying, spokesperson for the Chinese foreign ministry, who said “We hope the U.S. can work in concert with China to implement the two presidents’ consensus that was reached in Osaka, and to work out a mutually acceptable solution through equal-footed dialogue and consultation with mutual respect.”

The intensifying U.S.-China trade war, the continued Brexit drama, protests in Hong Kong, and political trouble in Italy all give portfolio managers something worry about, said Kathy Lien, managing director of FX strategy at BK Asset Management, in a note. “Any one of these issues could tip one if not many countries into recession. So regardless of the durability of the yield curve inversion, the risk of recession this cycle is greater than its ever been.”

However, industrial output fell 0.2% in July, the second drop in the past four months, the Federal Reserve reported Thursday. Industrial output is only up 0.5% on a year-on-year basis.

The National Association of Home Builders issued its housing market index, showing it rose to 66 in August from a revised level of 65 in June, its highest level since May.

Shares of Dow component Cisco Systems Inc.CSCO, -7.32% were down 7%, after giving tepid guidance for the next quarter late Wednesday.

Opinion: Cisco’s weak outlook stokes fears of slowdown in tech spending, but 5G may offer light at end of tunnel

Shares of General Electric Co. GE, -8.25% fell 7.4% early Thursday to a more than six-month low, after a research report from Madoff whistleblower Harry Markopolos posted a research report online accusing the conglomerate of inaccurate and fraudulent filings with regulators.