A decade after the $US100 billion ($142 billion) chocolate industry pledged to cut child labour in the world's top cocoa producers, a report sponsored by the US government shows the problem has actually gotten worse.

About 43 per cent of children from farming families in growing areas were carrying out hazardous activities in Ivory Coast and Ghana's cocoa farms in the 2018-19 season, according to a report from research group NORC at the University of Chicago. That's up from 30 per cent a decade earlier. The prevalence of child labour overall increased to 45 per cent from 31 per cent in the same period, the report showed. 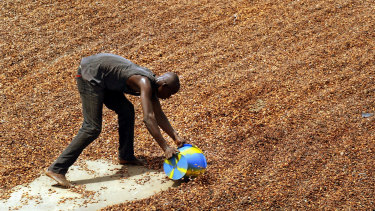 The chocolate industry pledged a decade ago to cut the worst forms of child labour by 70 per cent by 2020.Credit:AP

The findings are a blow to the cocoa and chocolate industry, which agreed a decade ago to cut the worst forms of child labour by 70 per cent by 2020. They also come just before elections in West Africa and at a time lawmakers in Europe and the US are pressuring Ivory Coast and Ghana to clean up the sector if they are to continue to import beans. Huge increases in production were one of the many challenges chocolate makers investing in sustainability faced.

"If you take a big pot of boiling water and you pour it into your bathtub, you will be able to measure the change in temperature. If you take that same pot of boiling water and throw it in your swimming pool, good luck seeing a change in temperature," Kareem Kysia, one of the report's authors said in phone interview on Monday (US time). "This is something we say throughout the report: you need a bigger bucket of water."

Major chocolate companies have committed to help eradicate child labour from their supply chains as consumers and governments become more and more concerned about the origin of their food. The European Union plans to introduce legislation that could eventually make firms responsible for human rights abuses and environmental harm in their supply chain, while US lawmakers have proposed banning imports of cocoa from produced with child labour.

Mars highlighted that the company has committed $US1 billion as part of a strategy to "help fix a broken supply chain." The World Cocoa Foundation, which represents the likes of Barry Callebaut AG, said the targets to reduce child labour were set "without fully understanding the complexity and scale of a challenge heavily associated with poverty in rural Africa and did not anticipate the significant increase in cocoa production over the past decade."

"There are today still too many children in cocoa farming doing work for which they are too young, or work that endangers them," said WCF President Rick Scobey. "Child labour remains a persistent challenge in Cote d'Ivoire and Ghana, despite major efforts by the governments, cocoa and chocolate companies, cocoa-growing communities, and development partners."

Ivory Coast earlier this year rejected a draft of the report, saying there were shortcomings in "sampling and extrapolation" and that other problems in previous surveys probably led to misleading conclusions. Authorities have made multiple raids on farms this year, rescuing children and adults who were allegedly forced to work on cocoa plantations. 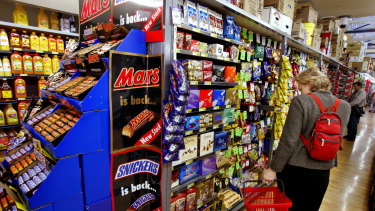 Mars has committed $US1 billion as part of a strategy to “help fix a broken supply chain.”Credit:Ben Rushton

A Ghana Cocoa Board spokesman couldn't immediately comment on the latest report, saying he hadn't yet seen it. The regulator, which has denied allegations of child labour in the past, is deploying a $US10 million information management system to improve transparency in the cocoa sector, spokesman Fiifi Boafo said on Sunday before the report was released.

The system will provide growers and their farms unique identification numbers, allowing the regulator "to scientifically prove the veracity of claims of child labour," among other issues, he said.

US Senator Sherrod Brown said child labour and forced labour have been a problem in the cocoa sector for two decades and corporations are not making the progress they claim to be in "eradicating these abhorrent labour practices." The NORC report doesn't cover forced labour.

"We will continue to push for all action necessary to prevent multinational companies in the cocoa sector from turning a blind eye to labour abuses in their supply chains," he said in a statement to Bloomberg.

"Interventions help the people on the ground in these countries, but they need to be scaled up," Kysia said.