The United States, with its aggressive pandemic aid measures and rapid vaccine rollout, is propelling the world economy, acting as a source of demand in all corners of the globe.

The government has been spending billions, creating booming demand in the United States. As new trade data shows, though, a meaningful share of this money is leaking overseas and going toward imported goods, in what economists call “fiscal leakage.” 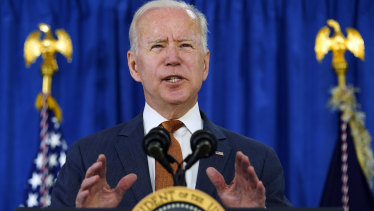 Joe Biden has been on a spending spree since taking over in the White House.Credit:AP

Ultimately, the outlook for the US economy will depend on the ability of other countries to take over as drivers of global demand in the months ahead — a prospect that remains uncertain.

America is buying much more stuff from overseas, as its stimulus-fuelled economy revs forward, while the rest of the world has not yet caught up and started buying more US exports. That is why the trade deficit was $US68.9 billion ($89 billion) in April, which was down from $US75 billion in March but far above levels of around $US45 billion per month immediately before the pandemic. People are spending their stimulus money on imported furniture, appliances and other goods.

One effect is that the rest of the world is acting as a pressure valve for inflationary forces that are building within American borders. If you think petrol and lumber prices are high now, imagine if the slow-growing economies of Europe and Japan were recovering at the same breakneck pace as in the United States.

“Fiscal leakage is inevitable,” said Maurice Obstfeld, a University of California, Berkeley, professor and former chief economist of the International Monetary Fund. “It’s desirable to the extent it will somewhat moderate inflationary pressures. And it’s desirable to the extent that to some degree it helps spur growth in the rest of the world, some of which comes back to help us.”

It reflects a difficult geoeconomic needle the United States is trying to thread. It’s best for everybody if the rest of the world joins the party and is able to power global demand, especially once the US stimulus dollars are largely played out. But if that resurgence is too fast and too strong, it will just make the inflation problems already evident in many markets worse.

Moreover, some of the most effective tools involve global vaccine distribution, not economic policy. Successful vaccination would help get supply and demand, both for physical goods and for tourism and other services, back on track.

The United States typically runs a large trade surplus in services, including software, Hollywood films and banking. But the biggest single area of services exports before the pandemic was international travel.

In the math of global economics, a foreign tourist staying in the United States is essentially purchasing an American services export. Travel exports were only $US18 billion in the first four months of 2021, down from $US67 billion in the same period of 2019. 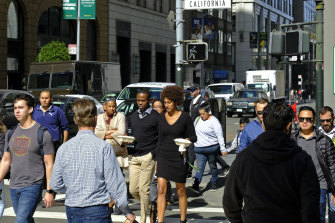 US citizens are opening their wallets again. Credit:AP

Meanwhile, flush US consumers have shifted their spending away from services and toward goods. In the first four months of the year, imports of consumer goods were 29 per cent higher than in 2020, a $US57 billion jump.

“The only thing people could consume was goods,” said Constance Hunter, chief economist at KPMG. “You couldn’t have a wedding; you couldn’t go to a baseball game. So what did people buy? They bought goods, and that’s much more of a global market than services.”

In effect, the United States and China are acting as the drivers of the global economy, while most of the rest of the world is further behind in recovery from the pandemic.

A promising possibility would be if the baton of economic growth could gradually be passed around the world — having started in 2020 in China, continuing through the first part of 2021 in the United States, then to other parts of the world as the American stimulus dollars fade. That could help the United States avoid a post-stimulus economic hangover.

“If Europe is lagging us by a quarter or two, and emerging markets are lagging Europe, maybe we could get a phased global recovery where the growth that we get is a good thing, without putting too much pressure on supply at once,” Sheets said.