Trade-war de-escalation perks — catch ‘em while you can.

Skepticism should be natural every time this saga takes a positive turn, given investors have been riding the U.S.-China trade roller coaster for over a year. But a tariff reprieve for Chinese imports of mobile phones and toys — holiday favorites — sent stocks flying Tuesday.

For Wednesday, economic worries are back with a vengeance, to get around that. The bond market’s favorite recessionary indicator threw up a big red flag this morning and futures are tanking. (see Chart of the Day). Ahead of that, data showed the global economy, particularly in trade-sensitive nations like Germany and China, struggling. China industrial output hit a 17-year low, while Germany released data showing the economy in contraction.

Our call the day will arm some of the skeptics out there. It comes from RBC Capital Markets’ head of U.S. equity strategy, Lori Calvasina, who has been worried for some time about an excess of investor euphoria when it comes to the S&P 500 SPX, +1.48% . She says the recent drop in stocks has only made a dent in that mania.

Calvasina tracks weekly U.S. equity futures reports provided by the U.S. Commodity Futures Trading Commission (CFTC), data used by some on Wall Street as a measure of sentiment of how hedge funds and institutional investors are positioning in the U.S. equity markets. 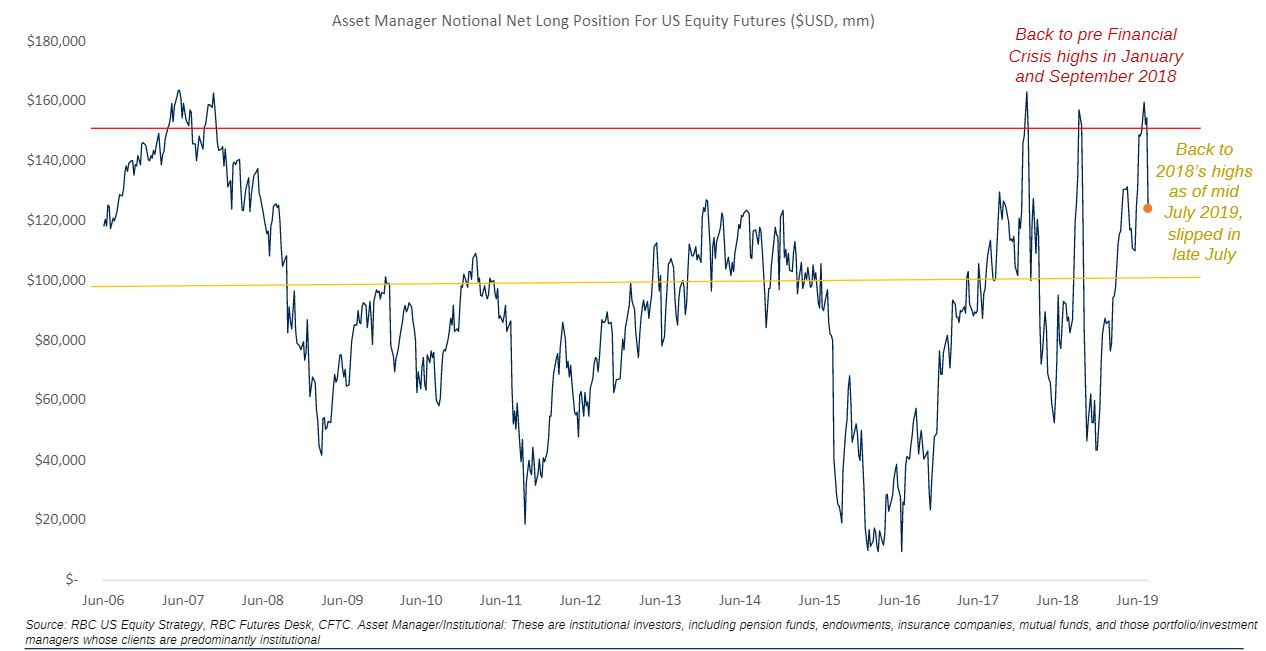 Her chart shows long equity futures bets spiked in mid-July, bringing them back to the highs of January 2018 and September 2018 — both in line with levels not seen since just before the Financial Crisis . “This has been telling us that institutional investor positioning has been euphoric and that the U.S. stock market remains vulnerable to bad news,” Calvasina told investors in a note Wednesday.

The chart also shows that positioning in those futures is starting to unwind. It reflects levels as of August 6, which includes the worst day of 2019 so far — a 3% drop for the S&P on August. 5.

“But even with the drop that occurred, current levels are still well above past lows including those achieved in December 2018,” says Calvasina. “We won’t be sleeping well anytime soon, based on what we saw, given our worry that downside beyond even 2,725 [on the S&P 500] may be needed to full resolve this crowding problem.”

Opinion: How bear markets attack your mind and your money

A closely watched recession indicator, the difference between the 10- TMUBMUSD10Y, -5.40% and the 2-year Treasury note yield TMUBMUSD02Y, -4.62% , fell into negative territory as of early Wednesday. When that has happened in the past, the U.S. economy has often fallen into recessions. It hasn’t inverted since 2007, and Twitter’s market watchers are all over this one.

Opinion: Small-cap stocks are badly lagging the S&P 500 — is that a warning sign?

The We Co., parent of shared office spaces group WeWork, has filed for an IPO, and also said it lost $1.6 billion in 2018.

Overstock OSTK, -17.58% CEO Patrick Byrne’s tales of international espionage and conspiracy are a mere distraction for fed-up investors of the struggling e-commerce group,

Facebook FB, +1.66% may be in hot water again over privacy issues after Bloomberg reported the social media company has been paying contractors to transcribe audio of users chats.

Food delivery firm Grubhub GRUB, -0.30% and industrial heavyweight 3M MMM, +1.71% are among companies most vulnerable to an attack by activist investors, MarketWatch reveals.

A day ahead of Thursday’s huge data dump, import prices are due ahead of the open.

“How anxious are they to instigate and see chaos!” — That was China’s Foreign Ministry spokesperson Hua Chunying, who accused U.S. lawmakers Nancy Pelosi and Mitch McConnell of stirring up trouble with their comments over Hong Kong unrest. Meanwhile, the territory’s airport has just reopened.

Cotton swabs — bad for oceans and possibly deadly for your brain.

You and your closest friend are probably thinking alike all the time.