The Best College Town in America 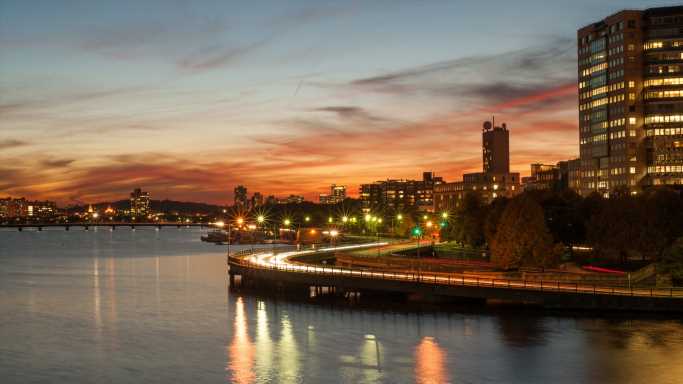 College towns can be divided into at least two categories. The first is places like Gainesville, Florida. It is completely dominated by the University of Florida, one of the largest public university campuses in the state. Its total enrollment is near 60,000 students. Gainesville’s population is barely 130,000. At the other end of the spectrum are places like the University of Chicago, which is tiny compared to the country’s third-largest city.

To identify the best college town in America, 24/7 Wall St. reviewed U.S. Census Bureau data about the affordability, economic conditions, health, safety and commutability, as well as arts, entertainment and dining options, in college towns across the country. We considered cities, towns and villages with at least 30,000 residents and where at least 25% of the population is enrolled in college.

On the list we considered to pick the best, we found that highly rated college towns are spread across 21 different states, many of which are home to their state’s large, public flagship institutions. These towns tend to be relatively affordable, safe and economically prosperous. They also tend to have a wide array of entertainment, arts and dining options.

The population of a college town tends to have a much higher level of education than the typical U.S. city. People who live in these top towns have a bachelor’s degree attainment rate higher than the national rate of 32.1%, and some even rank among the most educated cities in the country.

The best college town in America is Cambridge, Massachusetts. Here are the details:

In determining the best college town in America, the number of degree-granting colleges and universities (including graduate degrees) in each city or surrounding county in 2020 came from the National Center for Education Statistics. Data on enrollment by college came from the same source. The percentages of adults with at least a bachelor’s degree in each city are five-year estimates from the U.S. Census Bureau’s 2019 American Community Survey. And the number of restaurants per 100,000 county residents came from the U.S. Census Bureau’s County Business Patterns and are for 2019.

Click here to see the 30 best college towns in America.

Lates News:
2021-10-12
Previous Post: Derived Finance Completes $3.3M Funding Round
Next Post: The Future of Online Gambling Will Benefit with the Continued Introduction of Cryptocurrency