For retirees and other investors in search of a big dividends — and franking credits — it has been hard to go past the big banks.

The major banks make up four of the top-six domestic shares held by do-it-yourself super funds, with Westpac the most widely held stock, according to Class, a Self Managed Super Fund software business. 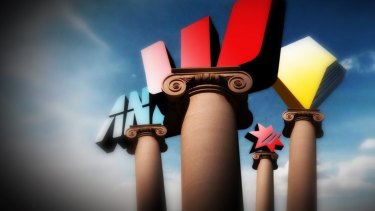 NAB cut its dividend this month, and some expect Westpac will follow suit.Credit:Karl Hilzinger

Lately, however, these investors have been given a few reasons to think more carefully about "set and forget" investments in the big four.

One risk hanging over the entire sector is the impact of Labor's plan to scrap refunds on excess franking credits, if elected this weekend.

Given the popularity of bank shares in SMSFs, Citi analysts predicted earlier this year that the policy change could wipe tens of billions of dollars off the combined share market value of the big four banks, and some of that has probably already been "priced in" by the market.

This month's round of bank profits also underlined the pressures on some lenders' dividends, as the sector faces its toughest environment in a decade.

National Australia Bank this month cut the dividend it had been paying for the past five years, while some analysts forecast Westpac will also cut its dividend in a year's time.

The other two big banks – Commonwealth and ANZ – are in a different position and there's little chance they will cut their dividends this year, unless there is a serious slide in the economy.

Even so, the cuts at NAB and the scrutiny of Westpac's dividend show that investors cannot assume these payments are bulletproof.

In a nutshell, NAB cut its dividend because its payout ratio — the share of profits being paid to shareholders — was unsustainable. Westpac's dividend payout ratio also jumped to 98 per cent in the last half, due to hefty compensation payments.

Westpac last week said it was able to "look through" what should be a temporary rise in costs, but some, such as UBS analyst Jonathan Mott, still think the crunch on bank profits will lead to a future cut in the dividend.

Jun Bei Liu, portfolio manager at Tribeca Investment Partners, believes there will be pressure on dividends over the next 12-to-18 months across the banking sector due to a worsening profit outlook.

She points out that bank profit margins are narrowing, at the same time as costs for bad loans are already at record lows, and a rising number of customers are falling behind on home loan repayments.

"That just means there's more loan losses to come, combined with lower margins and no revenue growth," she says.

Against this, however, bank boards are typically reluctant to cut their dividends unless they have little choice. Typically, this happens when there is a sharp rise in bad debts, during a recession.

Shaw and Partners analyst Brett Le Mesurier says that provided banks have sufficient capital, it is "sensible" to pay out a larger share of their profits as dividends at a time of slower credit growth.

He said NAB had cut its dividend because its previous profit outlook was too optimistic, but this did not imply other big banks would also lower their dividends.

Morningstar head of banking research David Ellis also expects Westpac can maintain its dividend, and says even if the dividend is cut, that won't be "the end of the world."

Most bank-watchers say that ANZ and CBA's dividends look relatively safe. ANZ caved into pressure and cut its dividend back in 2016, and recently it has had excess capital that it has spent on a $3 billion share buyback.

Ellis predicts CBA may also launch a share buyback or issue a special dividend after it receives billions for the sale of its global asset management business later this year.

"CBA won't be be cutting dividends anytime soon. They will have surplus capital they have to deal with," Ellis says.

The big four's profit engines are spluttering but the effect this has on dividends will vary from bank to bank.