Joe Biden is riding high in the polls with 10 weeks to go before the US election – but one number will furrow brows in his camp more than any other.

Donald Trump is given a big thumbs-down on his handling of COVID-19, foreign policy, the direction of the country and overall job approval. But even during the biggest economic crisis in living memory, Americans back his captaining of the US economy. 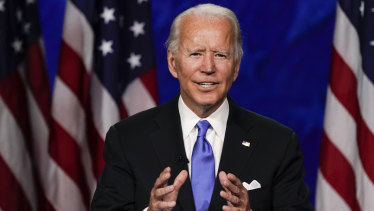 Trump's economy approval rating remains in positive territory at +8, according to YouGov. More concerning still for Camp Biden is that just 34 per cent of Americans believe the economy would get better under his presidency. A total of 39 per cent fear it would get worse.

If the "it's the economy, stupid" mantra still holds strong, November's election could be tighter than Biden's current nine-point lead suggests. Can the former vice president get voters to back Bidenomics?

Despite his reputation as a moderate who can reach across the aisle, Biden's platform is seen by experts as the most extreme proposed by a Democratic presidential challenger in decades.

"If we compare to previous Democratic plans or Trump's plan, it is a pretty radical change," says Stephen Gallagher, US economist at Société Générale. "But if we compare to the offering of the other Democratic candidates, it is more moderate compared to Bernie Sanders, Elizabeth Warren or even Kamala Harris."

There was a fairly serious risk that the shift would have been even more crashing had the man Trump derides as "Sleepy Joe" not come out on top in the primaries, Gallagher says.

Four years of Trump have pushed the Democratic Party further Left as the country becomes increasingly polarised. Biden has followed his party, being forced into a number of key pledges to curry favour with Left-wing Democrats who have grown in stature.

The field of candidates in this year's Democratic primaries have responded to the popularity of the party's Leftists, such as firebrand socialist Bernie Sanders and liberal policy wonk Elizabeth Warren. Ultimately Democratic voters opted for a candidate who they believe is best-placed to defeat Trump – electability was a top concern, polling suggests – but the race has left its mark on Biden's platform. 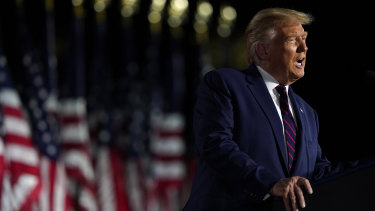 Sam McGowan of Beacon Policy Advisors, a research firm focused on Washington, says a Biden administration is likely to reflect a growing scepticism of Silicon Valley.

"If Biden wins, there's going to be a lot of influences out there that are going to shape the kinds of the policy that they're going to put in place. And I really think the conversation will shift towards more stringent enforcement." McGowan says that even if a Biden administration does not aim to break up Big Tech, it will certainly make predatory acquisitions harder and enforce competition.

However, Biden's Left-leaning agenda faces key hurdles. The 77-year old needs to win big against Trump to push through the most radical parts of his agenda.

The Democrats currently hold the House of Representatives but the other half of Congress, the Senate, is controlled by the Republicans. Many of Biden's economic plans would be scuppered unless the Democrats win the three or more seats needed to take the Senate.

"One question is whether he might be limited by Congressional opposition. The battle for Senate control looks tight," says Philip Shaw, Investec economist.

Knightley says: "If Biden gets a clean sweep and the Democrats win the House and Senate, we are going to see a very significant shift in policy. Much more taxation, more spending and more regulation of energy, financial services and big tech."

His ambitions could also be limited by the state of public finances he inherits. Trump was running high deficits at close to 5 per cent even before COVID struck and sent debt soaring.

"When we get in, the pantry is going to be bare," warned Ted Kaufman, a leading figure in Biden's transition team. Economists also argue that his platform could be harmful for the economy in the longer term.

Gallagher says Biden's policies would slow the economy or limit its potential, despite rising in popularity among voters. "It's not until the economy slows that these voters will abandon their support for all these changes," he says, highlighting Biden's healthcare and energy plans.

Shaw adds that Biden's tax pledges could have a significant impact on investor confidence, while the roaring recovery on the US stockmarket could be derailed by an antitrust crackdown.

Biden has framed the 2020 election as a "battle for the soul of the nation". His plans would be transformative for the world's largest economy – but polling suggests Americans may be reluctant to give up on Trump's vision just yet.