President Donald Trump said he's personally holding up a trade deal with China and that he won't complete the agreement unless Beijing returns to terms negotiated earlier in the year.

"It's me right now that's holding up the deal," Trump said. "And we're going to either do a great deal with China or we're not going to do a deal at all." 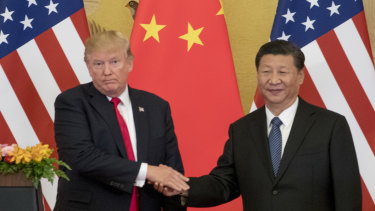 Donald Trump says he is the one holding up a trade pact with China. Credit:AP

Last month, the US accused China of reneging on provisions of a tentative trade deal, bringing talks to a halt. "We had a deal with China and unless they go back to that deal I have no interest," Trump said.

Trump's comments came a day after he threatened to raise tariffs on China if President Xi Jinping doesn’t meet with him at the upcoming Group of 20 summit in Japan. Trump told reporters that he could impose tariffs of 25 per cent or "much higher than 25 per cent" on $US300 billion ($431 billion) in Chinese goods.

On Tuesday in Beijing, a Foreign Ministry official demurred. "We have noted that the US publicly stated many times that it looks forward to arranging a meeting between the Chinese and US. presidents on the sidelines of the G-20 summit. If we have this information we will release it in due time," spokesman Geng Shuang said.

Trump said again Tuesday that he expects to meet with Xi at the summit later this month.

We're going to either do a great deal with China or we're not going to do a deal at all."

The G-20 in late June is one of the last chances for Trump and Xi to head off a conflict between the world's biggest economies that appears to be worsening by the day. Besides tit-for-tat tariff increases, the US has blacklisted Huawei Technologies and threatened other major Chinese tech companies, while Beijing is drawing up a list of "unreliable entities" in the US. that could face restrictions.

A pact Trump reached over immigration with Mexico last week encouraged him to take a harder line with China, said White House Acting Chief of Staff Mick Mulvaney. Under that deal, Trump called off planned tariffs on Mexican goods in exchange for a crackdown on undocumented immigration into the US.

"It probably emboldens him to take a tougher stance, but that shouldn't surprise anybody," Mulvaney said Tuesday at the Peter G. Peterson Foundation's Fiscal Summit in Washington. "What did the president do when it came to Mexico? He tried to figure out a way to get our interests aligned."

Later Tuesday at an event hosted by the Wall Street Journal, Mulvaney said that he expected Trump and Xi to meet at the G-20, but that he didn't expect the leaders to reach a final accord. 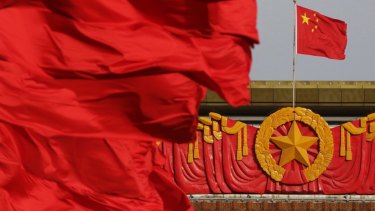 "I do not see the president's meeting as a deal closer," Mulvaney said, adding that it's an opportunity to get talks "hard-wired again."

The brinkmanship with China puts Xi — the country's strongest leader in decades — in perhaps the toughest spot of his six-year presidency. If Xi caves to Trump's threats, he risks looking weak at home. If he declines the G20 meeting, he must accept the economic costs that come with Trump possibly extending the trade conflict through the 2020 presidential elections.

The arguments for Xi to meet Trump mostly revolve around the need to prevent greater economic damage. China's imports tumbled in May, underscoring domestic economic weakness that could hurt global growth. For China, 25 per cent tariffs could result in a drag of nearly 1 per cent on growth by 2021 if they remain in place, according to Bloomberg Economics.

Xi, however, also has reasons to avoid a meeting with Trump. China has repeatedly said it won't be bullied or pressured into negotiating, and Xi could look as if he's giving Trump a win by meeting him after an explicit threat.

Since talks collapsed, China's state media has ramped up nationalist rhetoric. The Communist Party's flagship People's Daily newspaper ran a commentary last month saying China will never make decisions that "give up power and humiliate the country," a phrase used in school textbooks to describe the treaties China signed mostly in the 19th century.