What’s Next for the Crypto Traders?

The head of the International Monetary Fund (IMF), Christine Lagarde recently indicated that it is all but inevitable that cryptocurrency will be regulated moving forward. Like other authorities on the subject, she believes that nefarious operators use the anonymity of digital currency to hide their money from the authorities.

The IMF prefers that brokers and platforms come under some form of regulation, despite Bitcoin being unsupervised since 2009. Two of the world’s dominant cryptocurrency trading regions, South Korea and China have already implemented a clampdown on digital currency trading and ICOs.

In particular, South Korean cryptocurrency trading platforms can no longer accept foreign clients, as proof of residence and ID needs to be presented. The WEF (World Economic Forum) is also pushing for regulators to take a stance on making trading activity safer for everyone. It’s interesting to point out that on December 16, 2017, Bitcoin (BTC) peaked at over $19,340, but is now trading around $8,380.

The abrupt decline in digital currency has been attributed to increasing talks of regulation, the actions of China and South Korea, and the removal of South Korean cryptocurrency prices from Coin Market Cap. The top five digital currencies were hovering around the following trading levels on Sunday, 11 February 2018:

Presently, the value of the cryptocurrency market and its 1,523 digital currencies is approximately $410.58 billion – that’s a far cry from the near $800 billion towards the end of 2017.

What’s in the Pipeline for Cryptocurrency? 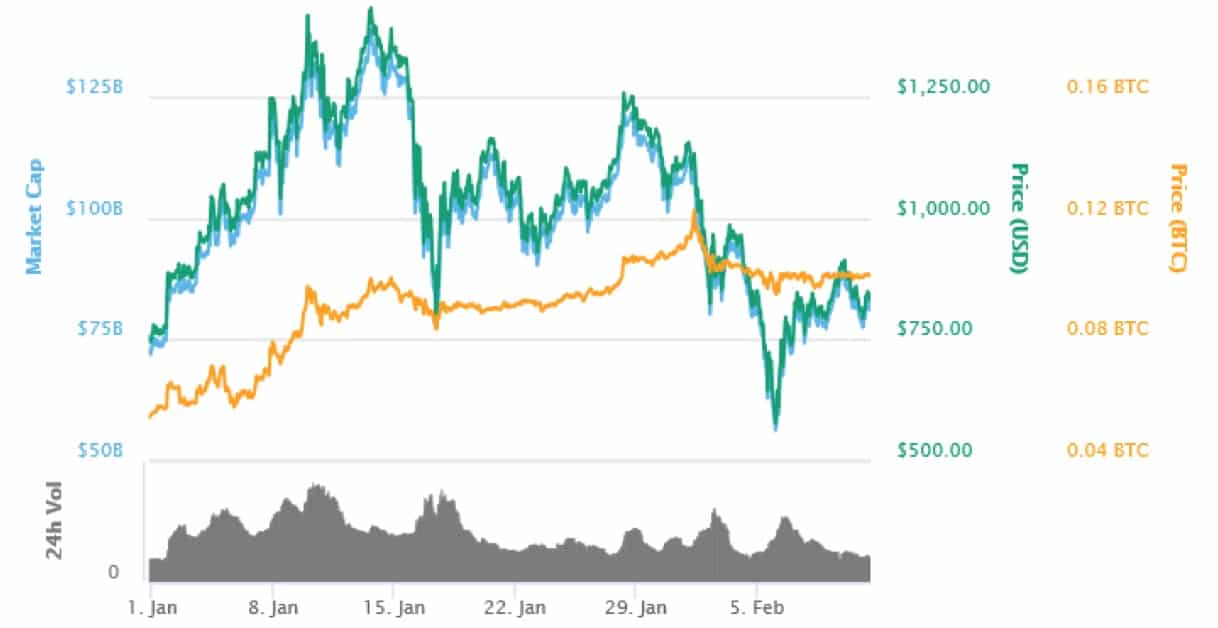 The market appears to be going through a period of consolidation right now. The frenetic selling activity has tapered off somewhat, although the volatility in this asset category remains high. A recent article in Forbes Magazine questioned whether Bitcoin was heading towards zero value.

According to PhD economist, Eli Dourado, Bitcoin will be surpassed by Ethereum and ultimately have very little value in the financial markets and elsewhere. The transaction fees for Bitcoin are much higher than they are for any other cryptocurrency, notably Litecoin, Ethereum, and Ripple.

Dourado talks about governance institutions as an important feature in determining the viability of cryptocurrency. In his opinion, Bitcoin suffers bad governance.

Switching gears to Ethereum, there is a greater degree of confidence about this cryptocurrency. For the year to date, Ethereum has fluctuated between $755.76 per unit on January 1, 2018, to its current level of $840.51 per unit. It has traded in a much tighter range than Bitcoin which has also lost significant dominance in terms of market capitalization since January.

But what is cryptocurrency really about?

Lorena Soto Botero, a leading cryptocurrency analyst believes that traders ought to understand a little bit more about the fundamentals of digital currency before they simply pick any of the 1,523 cryptocurrencies currently spread across 8,715 markets.

To this end she states, “I encourage clients to understand this cryptocurrency definition before they simply buy this or that, or trade Bitcoin, Ethereum, Ripple, or Litecoin. You must know about the utility value of the blockchain technology that powers the cryptocurrency. Does it have mass market appeal? Can it easily be integrated into existing systems? Will it gain the trust of the masses? These issues are just as important as speculative trains which tend to have a short shelf life. Education is important.”