The Crypto Winter Get Intense With Institutional Selling! Outflows Solely Focused on Bitcoin

Several digital assets, including Bitcoin and Ethereum, have been affected by the recent crypto crash that has captured the attention of the entire globe. Ethereum almost reached its 2017 lows at $880 during the “crypto winter.” After reaching its all-time high in November of last year at $69,000, BTC lost about 50 percent of its value.

Currently, the market is recovering and BTC is strengthening above the $20,000 milestone. The alternative cryptocurrencies are gaining momentum with marginal profits as they follow BTCs suit. At the time of writing, BTC is trading at $20,778 and has decreased by more than one percent in the last 24 hours.

It’s possible that a sharp decline in market capitalization, together with a number of liquidations and margin calls received by businesses owning digital assets or maintaining open long positions, scared away institutional investors, causing the industry to lose close to $500 million.

Outflows started on June 17 but have only just been recognized, according to Coinshares, because of the institutional investor and company reporting lag. The Bitcoin and cryptocurrency market crash is the primary cause, as was already indicated. The data indicates that Bitcoin was the main target of outflows. 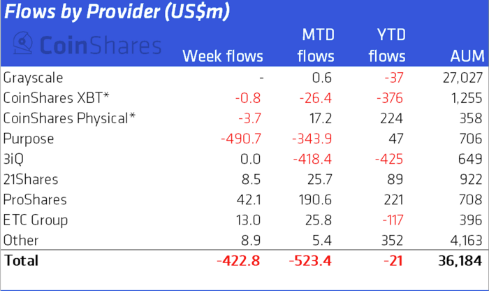 The Purpose Bitcoin ETF is the largest provider of outflows, with outflows totaling $490 million WTD and a negative $343 million month-to-date flow. Only the Short Bitcoin asset, which exposes investors to “Bitcoin short orders” and enables profiting from a declining asset, witnessed inflows.

Regarding the geographic origin of outflows, Canadian exchanges, where there was a significant amount of withdrawal activity on June 17, are the greatest sources of negative volume. Fortunately, given that the market was already recovering, we shouldn’t expect to see such significant withdrawals in the upcoming report. Instead, we should anticipate neutral or positive dynamics on institutional addresses.

Lates News:
2022-06-28
Previous Post: Airline passenger arrested after sending photo of GENITALS to others
Next Post: Met Office’s verdict on when scorching 30C heatwave will hit UK as temperatures skyrocket