With the global crypto adoption rate recording hockey-stick-like growth year over year, a new study by Grand View Research is now predicting an explosion of the crypto ATM market.

According to the San Francisco-based market research firm, the ATM market size which was valued at approximately $75.01 million in 2021 could hit a $1.8 billion valuation by 2028. To achieve this milestone, the firm expects the current market cap of this sector to expand at a compound annual growth rate of 59.2% beginning this year. 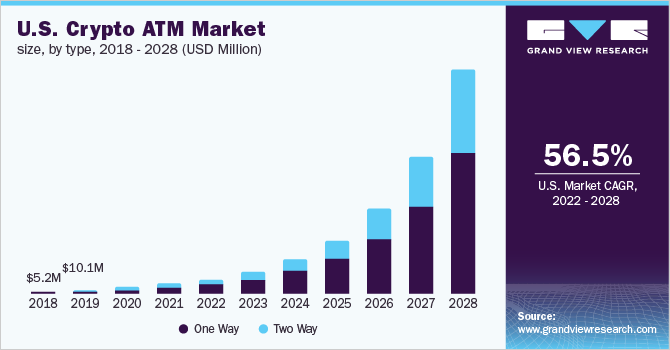 The growth in crypto ATMs is further being fostered by the efforts of various governments. Last year, El Salvador installed over 200 ATMs across the country after making Bitcoin a legal tender through a partnership with Chivo to power ATM and bitcoin wallets usage in the central American republic.

Since then, crypto ATMs have been popping up all over the globe with around 90% (29,801) of all ATMs in the world being in the U.S.A. Canada is the second-largest with about 2,133 ATMs closely followed by El Salvador among others. Hungary has also been reportedly installing Bitcoin ATMs according to various sources.

Owing to rising demand ATM manufacturers and service providers have also been flocking into the crypto sector with companies such as Velorex, Coinme, Liberty X, Covault, Crytomat among others already positioning themselves as crypto atm powerhouses. Others such as Moneygram have been investing heavily into these firms, betting on the huge growth of this sector. Several businesses such as Walmart and AMCA theatres have also installed crypto ATMs that allow shoppers to pay for merchandise using crypto.

Bitcoin operators in the U.S. have also formed the Cryptocurrency Compliance Corporative, a coalition formed to strengthen compliance standards in the industry to prevent crypto-related crime. To this end, members are required to ensure strong compliance under anti-money laundering and Know your customer requirements.