As Bitcoin (BTC) continues to rally to a new 2020 high above $16,700, traders are pondering whether this is the start of a new bull market.

Mike McGlone, senior commodities strategist at Bloomberg Intelligence, believes that the main hurdle is at the all-time high near $20,000. Once that is crossed, Bitcoin could reach a $1 trillion market capitalization. McGlone anticipates the uptrend to continue in 2021, and there are a growing number of analysts who agree with his view.

Veteran trader Peter Brandt also believes that if previous bull runs are considered, Bitcoin is in the early stages of its next bull cycle. 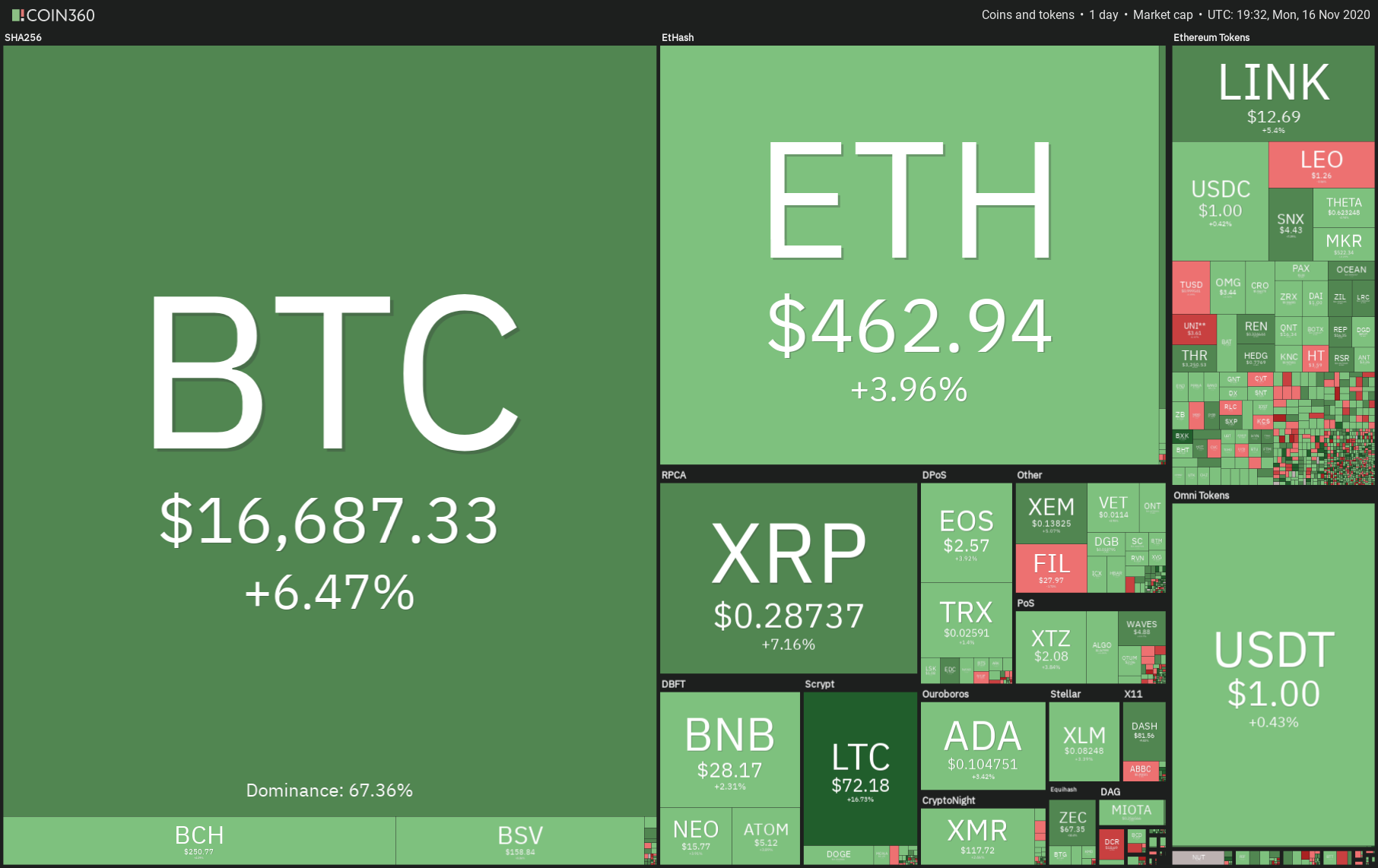 In another bullish projection, Citibank managing director Tom Fitzpatrick believes that Bitcoin could rally to $318,000 by December 2021. Fitzpatrick arrived at this forecast by considering the previous bull markets in Bitcoin.

Every bull phase witnesses considerable corrections on the way up, and these provide opportunities for traders to sell high and buy again during dips. However, in order to do this, traders have to time their trades, otherwise they may miss out on the move.

Let’s analyze the top 10 cryptocurrencies to spot any bearish or bullish setups that could project the next possible move.

In a strong uptrend, corrections usually do not last more than three days. This can be seen in Bitcoin’s rally that started in early October. The bulls have pushed the price above the overhead resistance at $16,500 and resumed the upward move. 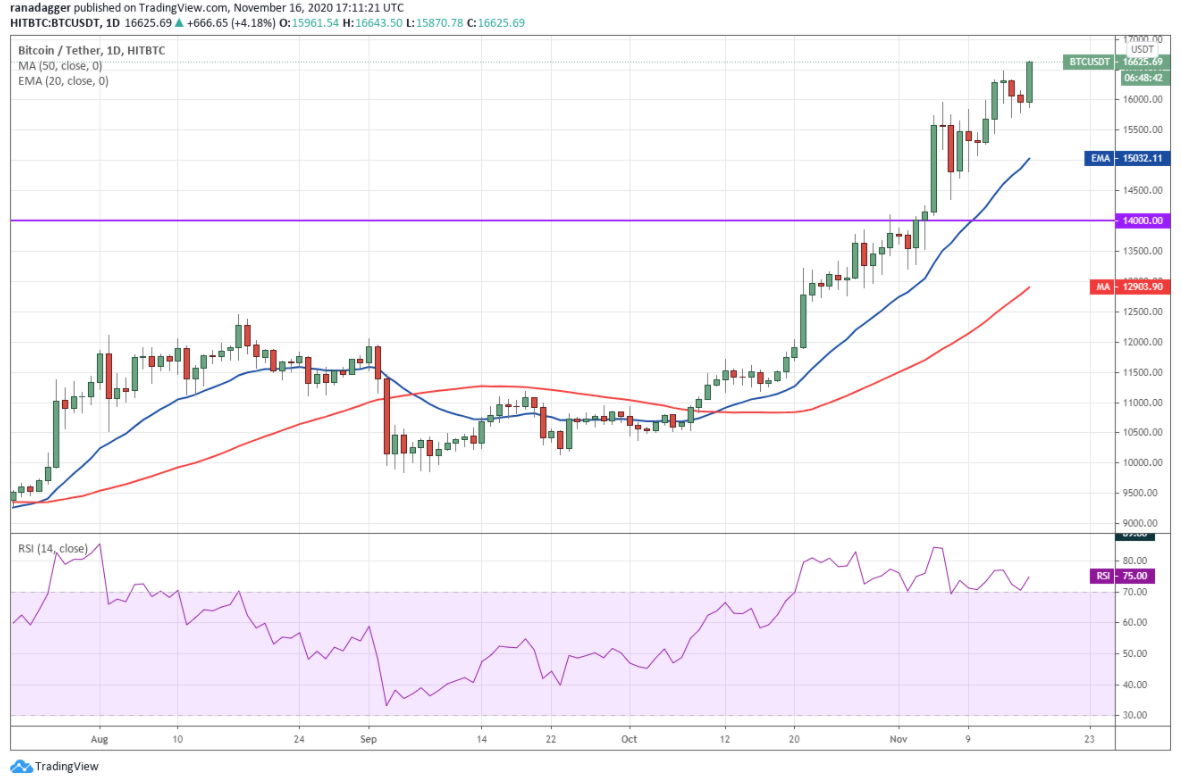 The BTC/USD pair could now rally to the next significant resistance at $17,200. Here again, the bulls may have to overcome strong selling by the bears because once the buyers clear this resistance, there is no major hurdle until the all-time highs.

The rising moving averages and the relative strength index in overbought territory suggest that bulls are in control. There is no negative formation on the chart that warns of a possible top at the current juncture.

Still, traders should be careful and not get carried away with strength. They can keep a close eye on the 20-day exponential moving average ($15,032) because a break below it will be the first sign of weakness.

Ether (ETH) has been facing selling pressure at the resistance line of the rising wedge pattern. This line has now reached close to the overhead resistance at $488.134. Hence, the bears are likely to mount a strong defense of this level. 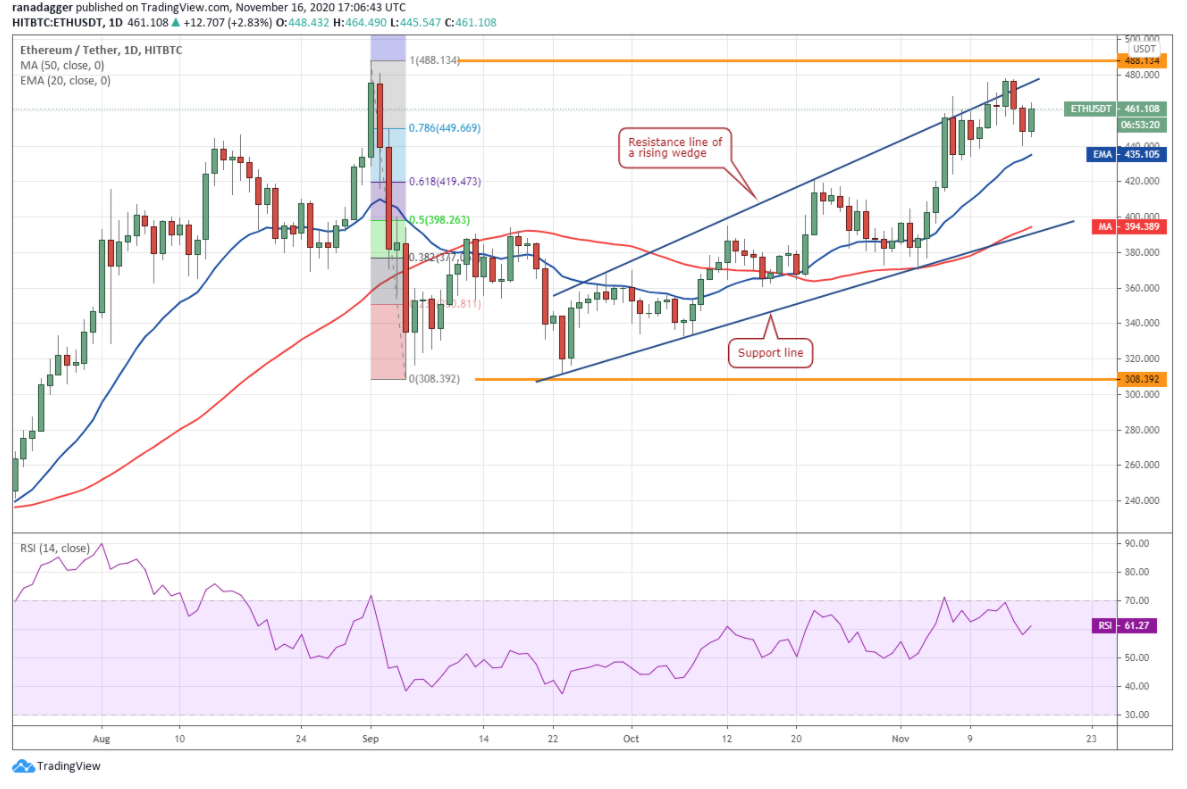 If the price turns down from the overhead resistance and the bulls do not give up much ground, then it will increase the possibility of a breakout of $488.134. Above this level, the ETH/USD pair could rally to $520 and then to $550.

The upsloping moving averages and the RSI above 61 suggest that bulls have the upper hand. This bullish view will be negated if the price turns down from the current levels or the overhead resistance and plummets below the 20-day EMA ($435).

XRP broke and closed above the $0.26 resistance on Nov. 13. Although the bears sold the rallies on Nov. 14 and 15, they could not pull the price back below the breakout level of $0.26. 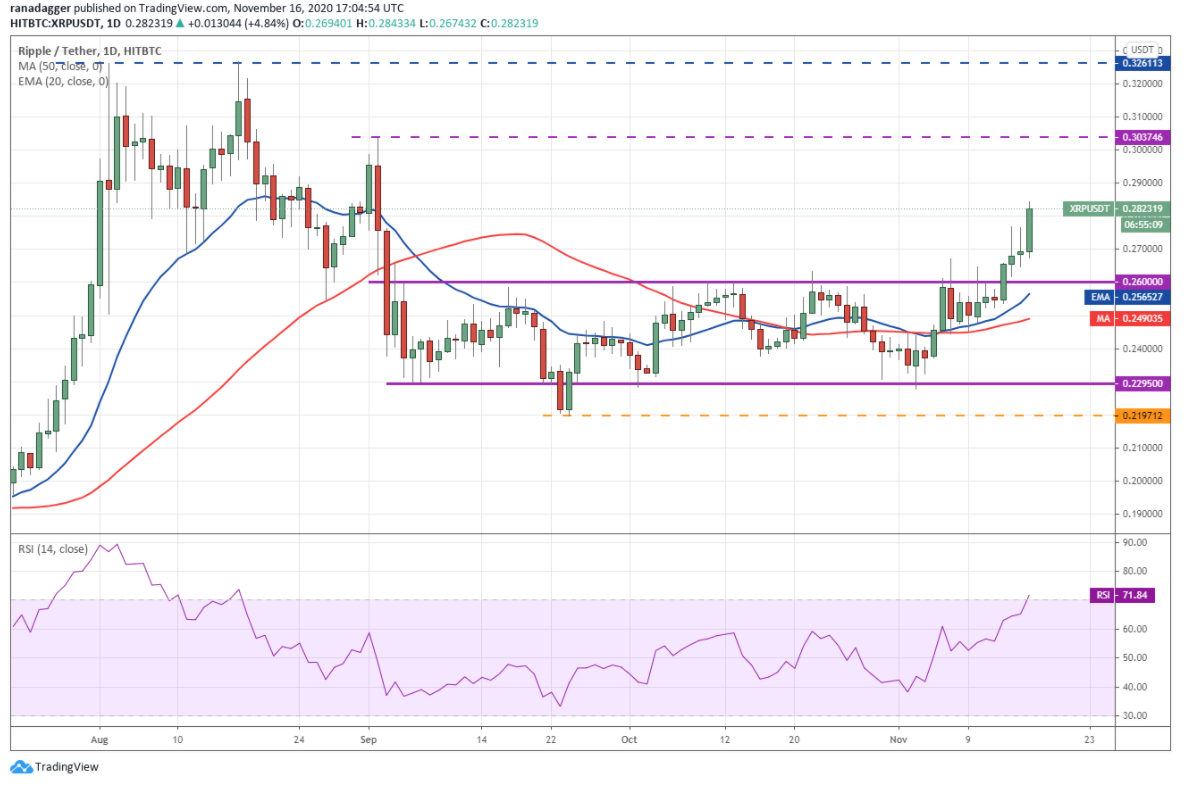 This shows that the sentiment has turned positive and the bulls are accumulating on dips. The 20-day EMA ($0.256) has turned up, and the RSI has reached the overbought zone, which suggests that the path of least resistance is to the upside.

The first target on the upside is $0.303746 and if this level is scaled, the XRP/USD pair could retest the $0.326113 resistance. This bullish view will be invalidated if the pair turns down and plummets below the $0.26 support.

Chainlink’s LINK is currently attempting to bounce off the 20-day EMA ($12). The bulls will now again try to propel the price above the $13.28 overhead resistance. If they succeed, the altcoin will complete an inverse head-and-shoulders pattern. 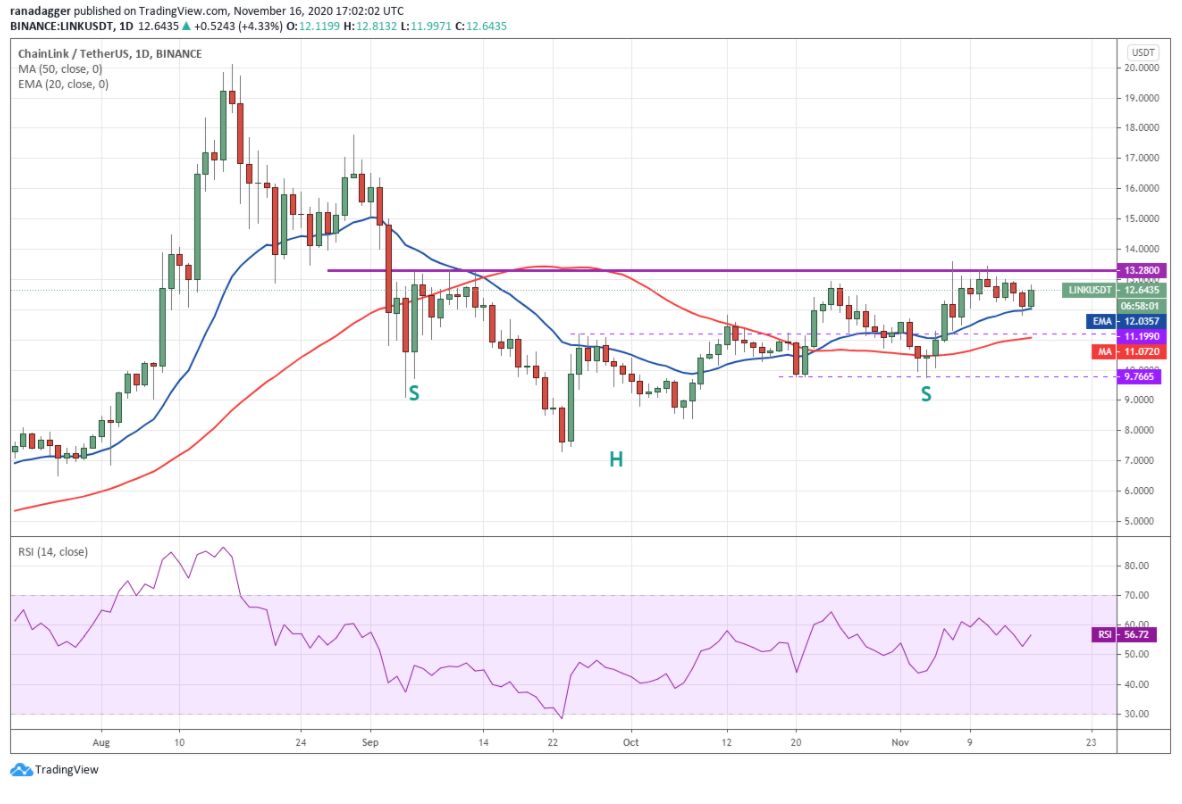 The target objective of this bullish setup is $19.2731. The gradually rising moving averages and the RSI just above the midpoint suggest a minor advantage to the bulls.

Contrary to this assumption, if the price turns down from the current levels or the overhead resistance and breaks below the 20-day EMA, the LINK/USD pair could drop to the 50-day simple moving average ($11). A break below $9.7665 will invalidate the bullish setup.

Bitcoin Cash (BCH) once again turned down from the overhead resistance zone of $272 to $280 on Nov. 15. This shows that the bears are defending this level aggressively. If the bears can sink the price below the immediate support at $242, a drop to $231 is possible. 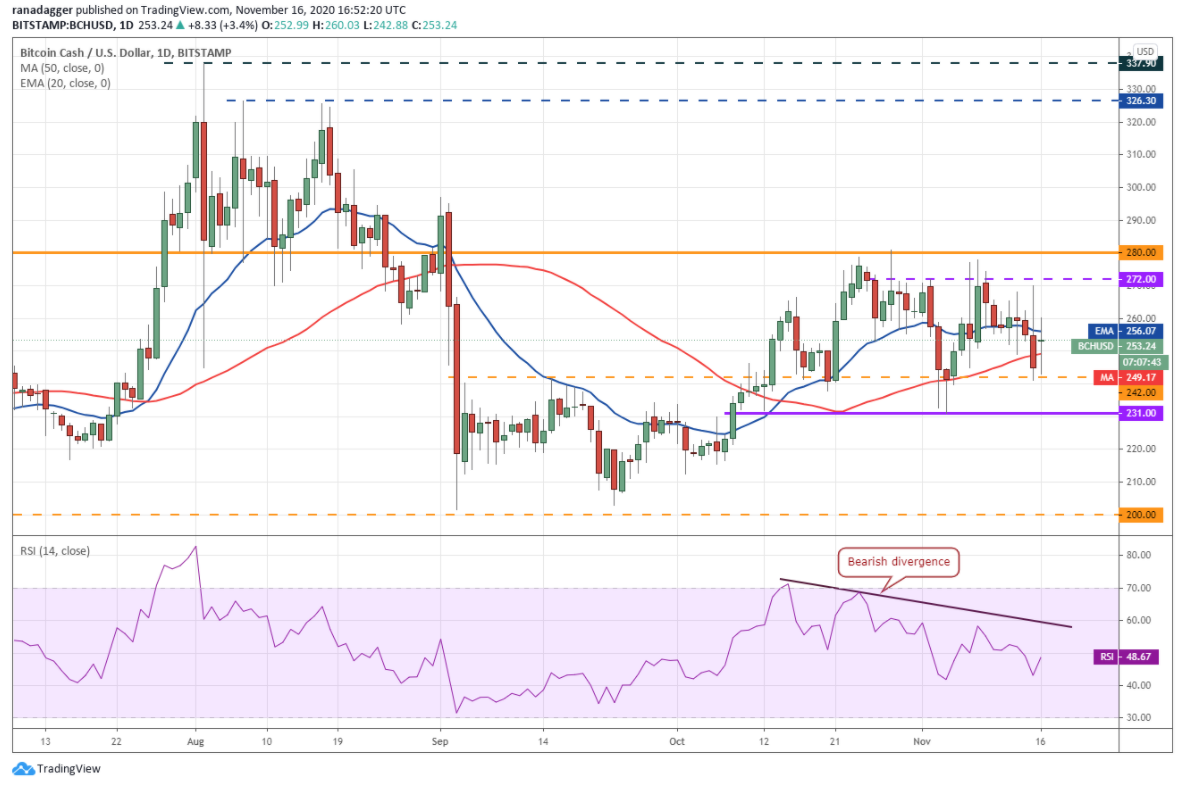 Trading inside a range can be volatile and difficult to predict. Hence, it is better to trade when the price reaches the support or resistance of the range. Another possibility is to wait for the price to break above or below the range before taking large bets.

Litecoin (LTC) has soared and broken out of the overhead resistance at $68.9008. If the bulls can sustain the price above the breakout level, it will signal the possible start of a new uptrend. The next target on the upside is $80, then $100. 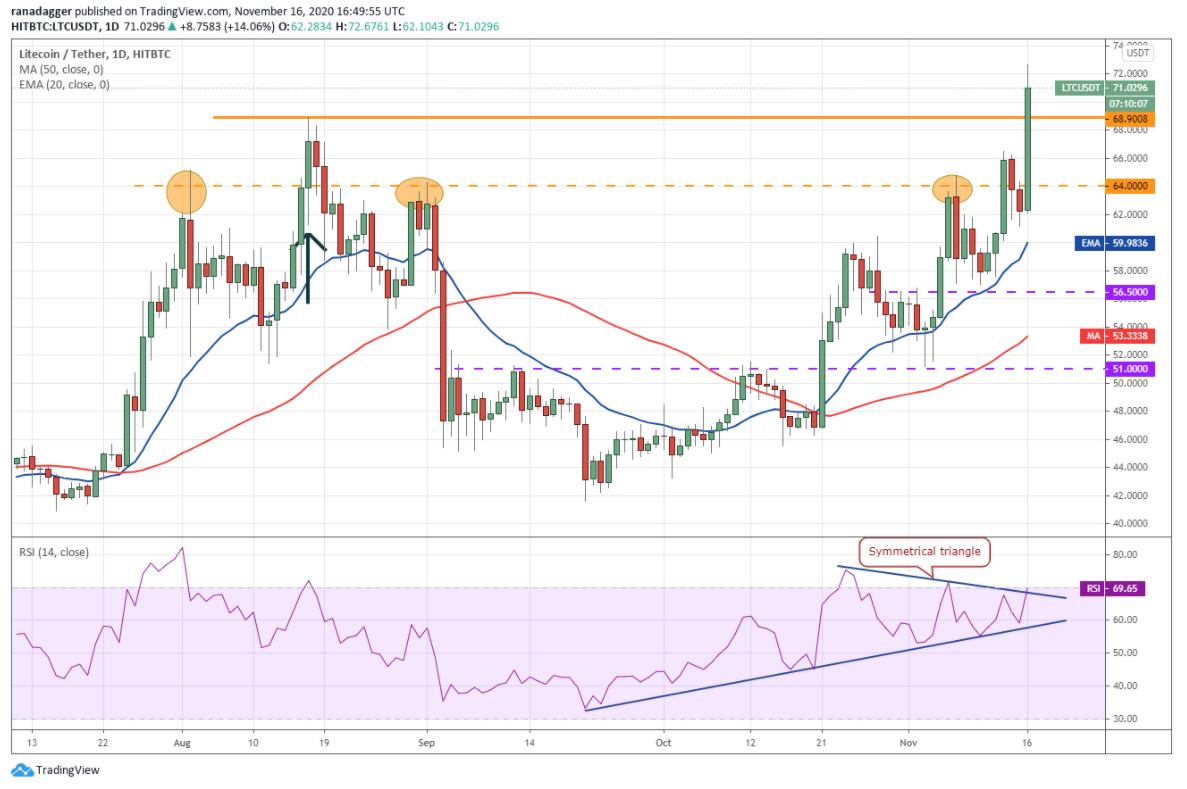 However, the bears are unlikely to give up easily. They will try to fake the current breakout and pull the price back below $68.9008. If they succeed, it will suggest strong selling close to the $70 mark.

If the price sustains below $68.9008, the bears will then try to drag the LTC/USD pair down to the $64 support. If they can do that, it will suggest that the upward momentum has weakened. 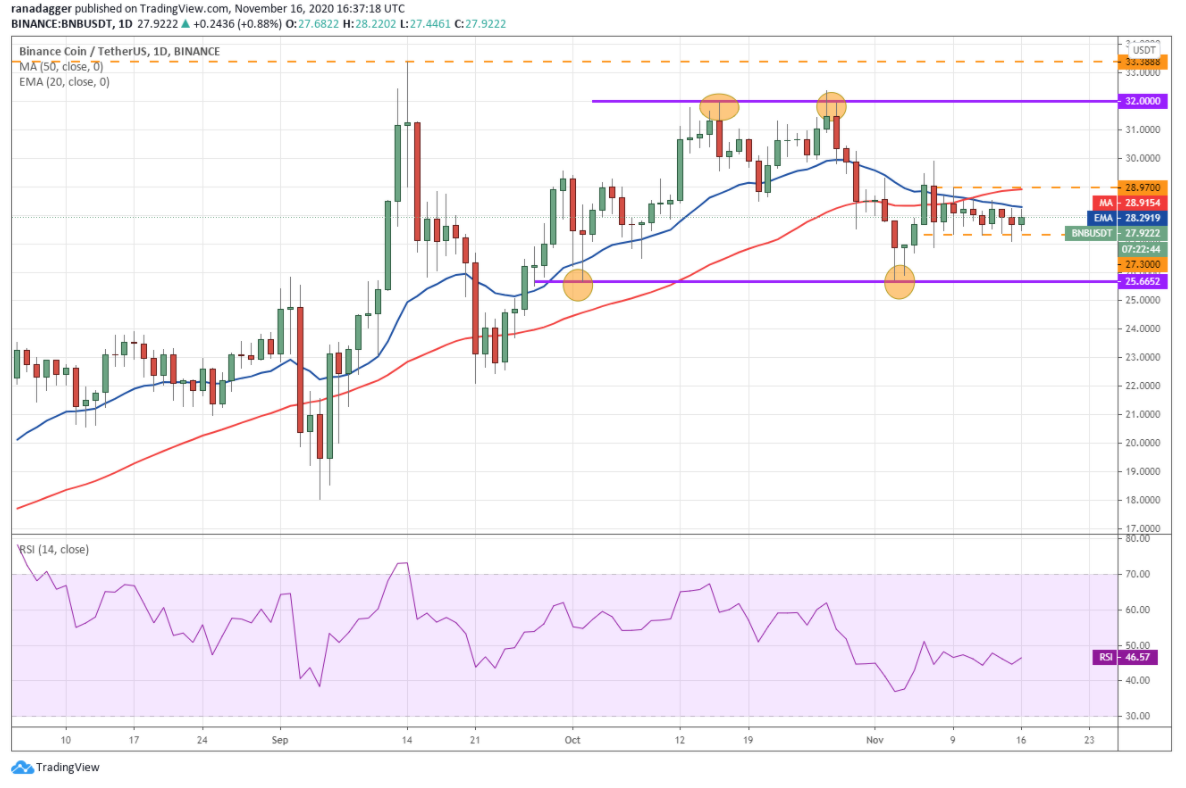 If the BNB/USD pair dips below $27.30, the next stop could be $25.6652. This is an important support, as the bulls have defended it aggressively on two previous occasions.

A strong rebound of this support will increase the possibility that the pair may consolidate in the $25.6652–$32 range for a few more days.

Contrary to this assumption, if the pair rebounds off the current levels and rises above the 20-day EMA, the bulls will again try to push the price above $28.97. If they succeed, a rally to $30 and then to $32 will be on the cards.

Polkadot’s DOT bounced off the 20-day EMA ($4.36) on Nov. 12, but the bulls could not push the price above the minor resistance at $4.63. This suggests a lack of demand at higher levels. 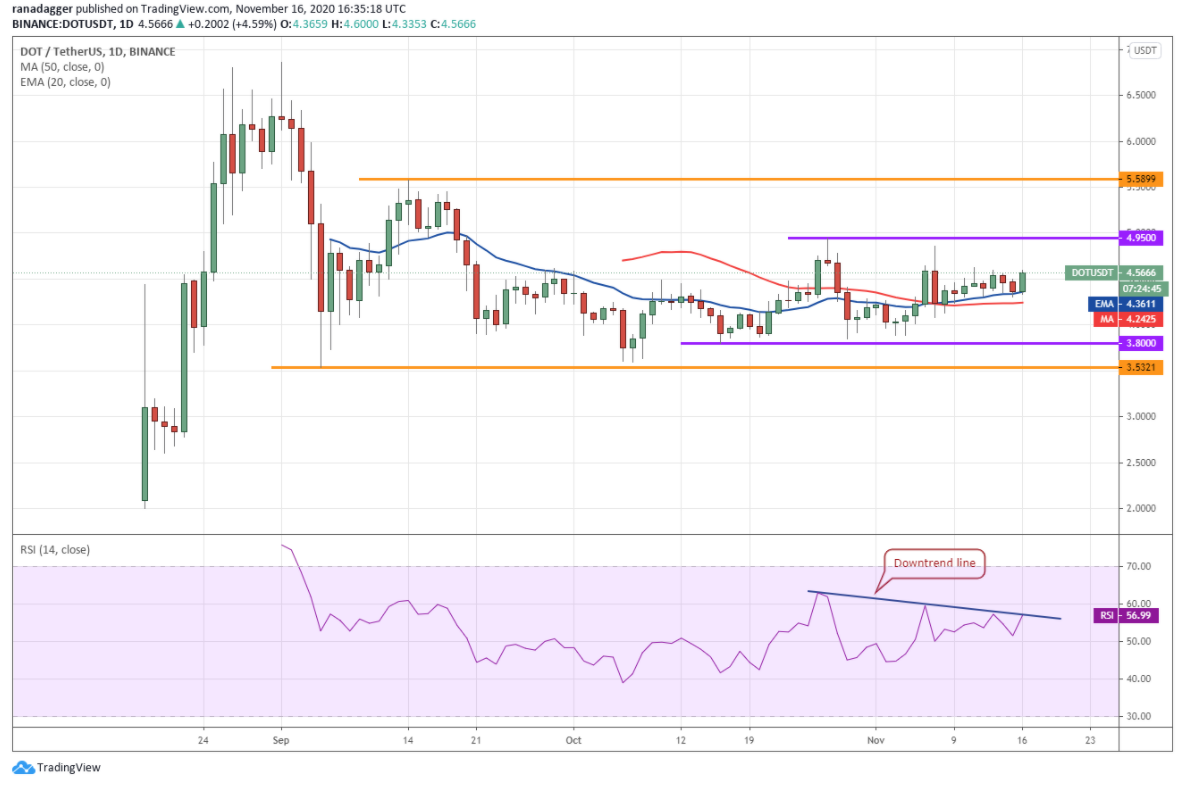 However, the bulls have again purchased the dip to the 20-day EMA and are currently attempting to push the price above the immediate resistance at $4.63. If they manage to do that, the DOT/USD pair could rally to $4.95.

The marginally upsloping 20-day EMA and the RSI in the positive territory suggest an advantage to the bulls.

This positive view will be invalidated if the pair turns down from the current levels and breaks below the moving averages. In such a case, a drop to $3.80 is possible. 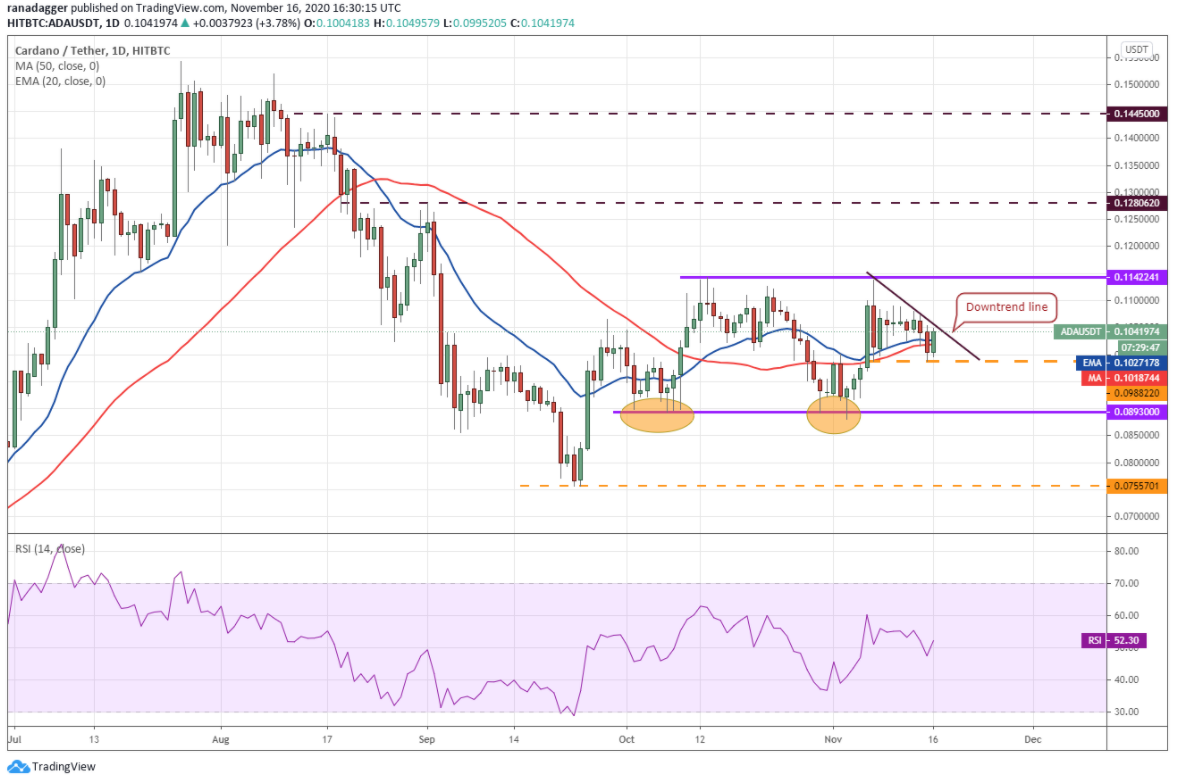 As the bulls had purchased the previous two declines to $0.0893, they are likely to attempt it again. Hence, a bounce off this support could extend the stay of the pair inside the range.

The flat moving averages and the RSI near the halfway mark also point to a range-bound action for the next few days.

Bitcoin SV (BSV) again turned down from the 20-day EMA ($161) on Nov. 14, which suggests that the bears are selling on minor rallies. If the selling continues, the altcoin could drop to the critical support at $146. 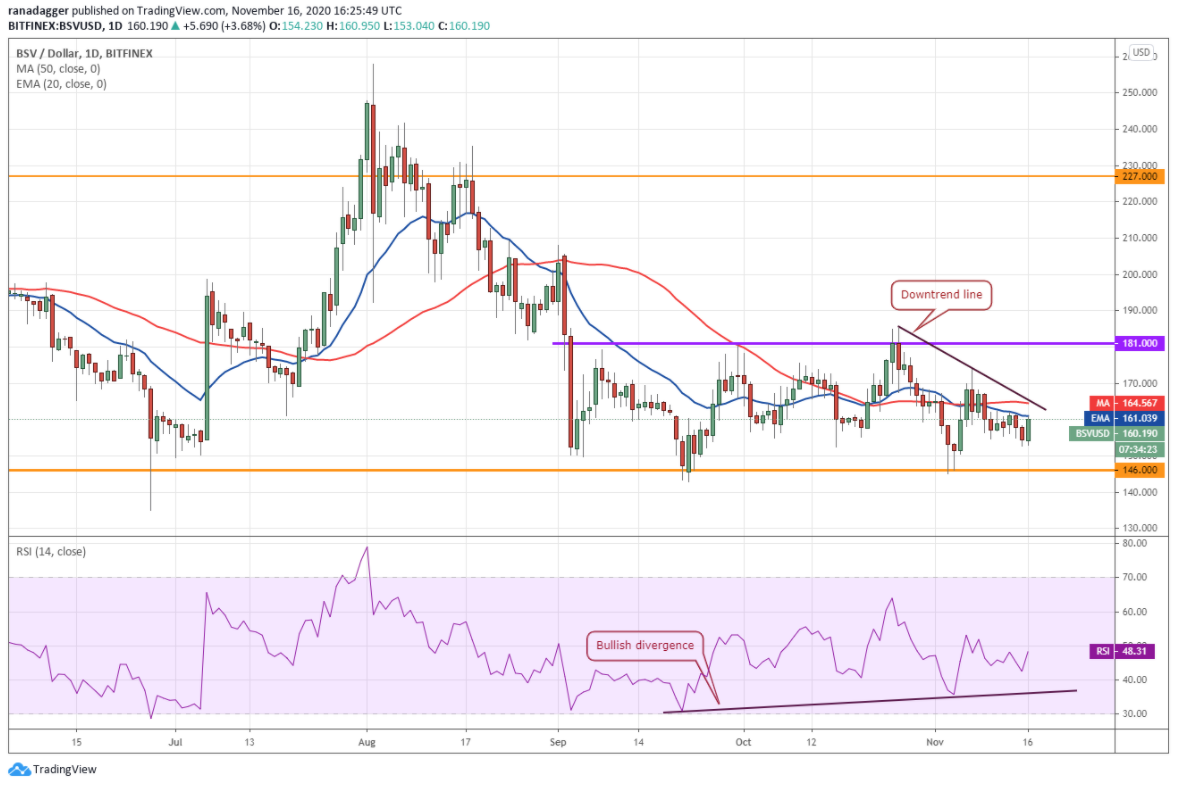 The downsloping 20-day EMA and the RSI below 49 suggest a minor advantage to the bears. However, one positive development is the bullish divergence on the RSI. This suggests that the downside momentum may be weakening.

The views and opinions expressed here are solely those of the author and do not necessarily reflect the views of Cointelegraph. Every investment and trading move involves risk. You should conduct your own research when making a decision.

Florida woman charged in machete attack wanted to be with man’s wife: deputies

Boy, 10, dies of coronavirus leaving his family in ‘indescribable’ pain