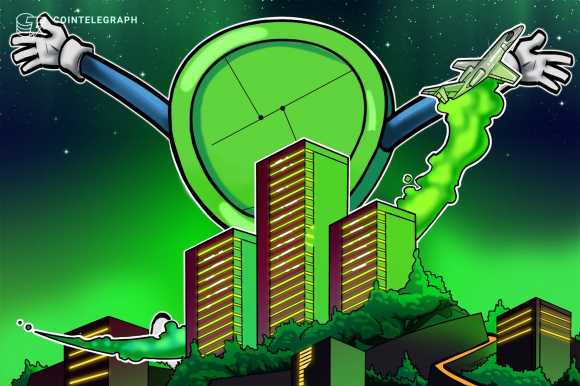 American retail giant Walmart has taken its first steps into the Metaverse with the launch of Walmart Land and Walmart’s Universe of Play on Roblox.

According to the company’s Monday announcement, Walmart Land focuses on “immersive experiences” with key features including a physics-defying Ferris wheel, unlockable tokens and badges, an interactive piano walkway and a D.J. booth for users.

Products from Lottie London, Bubble, UOMA by Sharon C and other brands will also feature in the virtual world, along with a store of virtual merchandise, or “verch,” for user’s avatars.

The retail corporation first signaled intentions to enter the Metaverse after filing a patent with the United States Patent and Trademark Office on Dec. 30 covering its own “digital currency” and “digital token,” while a separate application covered a trademark for the Walmart brand in virtual reality and augmented reality.

Co-founder of Leverage Game Media Jason Falovitch became the victim of a hack over the weekend with his account on NFT marketplace OpenSea cleaned out of a Mutant and Bored Ape and two Doodles.

Falovitch has claimed the hack has cost him over $1 million in Ether (ETH) and NFTs.

Falovitch is also the founder of the since-banned @NFT Instagram and Twitter handles which have both been suspended after repeated violations of platform community guidelines, and comes after allegations it promoted NFT projects without proper disclosures.

In a post to his more than 170,000 Twitter followers on Sunday, Falovitch, known as @jfx on Twitter, said he was hacked the night before, urging the public not to buy any of the items or anything else from his wallets.

Falovitch is known amongst the community as the founder of the @NFT account on Twitter and Instagram. He is also the co-founder of Leverage Game Media, a company he co-founded with American billionaire entrepreneur Mark Cuban which owns NFT assets and claims to help promote NFT projects through major sports social media pages.

However his prior involvement with the banned social media accounts has not escaped some of the grudge-holding community members, with some calling the recent hack “karma.”

Pixelmon rises from the ashes

After a less-than-stellar response to the launch of its NFT collection back in February, Pixelmon has come back with a new plan and fresh leadership under LiquidX, a web3 venture capital studio.

According to the company statement, LiquidX acquired a 60% stake in the project, and LiquidX co-founder Giulio Xiloyannis will serve as CEO of Pixelmon.

Earlier this year, many early minters of the Pixelmon NFT collection were left disappointed after the project revealed the finalized art in February, which ended up being well below expectation.

However, under new leadership, the updated Pixelmon roadmap now turns the underwhelming monsters from the original NFT collection into 3D characters that can be used within the forthcoming Pixelmon Massively Multiplayer Online Role-Playing Game (MMORPG).

Pixelmon was originally slated to launch a playable alpha of its MMORPG before the end of 2022, but now alpha testing for the game will begin in Q1 2023, with the game now set for release in late 2023.

Professional football club AC Milan (Rossoneri) has inked a new deal with MonkeyLeague, a Web3 football game built on the Solana blockchain — becoming yet another sporting brand to leverage the technology for fan engagement.

The partnership will see the creation of exclusive AC Milan branded NFT game assets, including new players for the game, skins, in-game clothing and stadiums.

Casper Stylsvig, Chief Revenue Officer of AC Milan said the club is “thrilled” and called the collaboration one “that allows us to strengthen our positioning in the field of digital innovation.”

According to the MonkeyLeague website, the game is a web3 based Esports game that will allow users to build and manage a dream team of at least six MonkeyPlayer NFTs, compete against other players and climb the league ranks.

AC Milan was founded back in 1899 and are currently the reigning champions of Serie A, the country’s top league football division.

The co-founder of NFTGo, Tony Ling, believes the mainstream presence in the NFT space isn’t a game changer, but innovation will be a key factor in adoption.