Playboy, the lifestyle and entertainment brand famous for its distinctive logo — among other things, has launched its first collection of five animated NFTs, on a new NFT market placed dubbed “Raretoshi” which is backed by Blockstream’s Liquid sidechain.

The NFTs were unveiled during the lead up to the 2021 Bitcoin Miami conference on June 3:

All of the NFTs are one-of-one editions, and include three Miami-themed animations, an animated magazine cover with the bunny logo covering a model, and a tokenized “bunny boarding pass.” 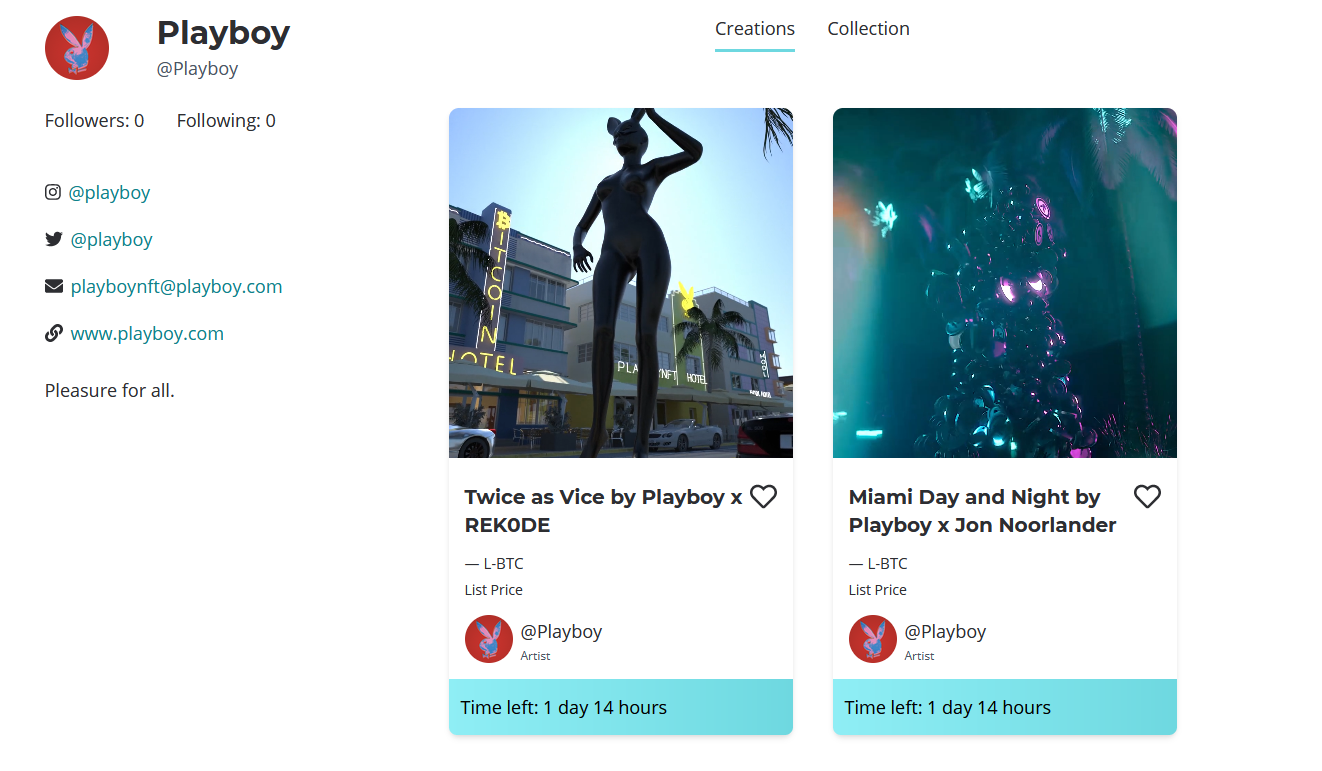 Collectors can bid for the NFTs using Liquid Bitcoin (L-BTC)   — a type of asset on Blockstream’s Liquid sidechain, with a supply that is pegged 1:1 with Bitcoin.

The highest starting price is 5 L-BTC worth roughly $188,315 for the “bunny boarding pass” — which includes a bonus of a round-trip flight on the Big Bunny jet, anywhere in the U.S., for the collector and 10 other guests.

Bidding activity, however, appears to be non-existent so far, with no bids placed on any of the five artworks at the time of writing.

The International Olympic Committee (IOC) and nWay — a subsidiary of game developer Animoca Brands — have collaborated to drop a set of Olympic-themed tokenized NFT pins and a video game.

The Olympic themed video game will launch in the lead up to the 2022 Beijing Olympic Winter Games and players will be able to earn free Olympic NFT collectibles if they’re any good.

The animated 3D pins commemorate historic events from the history of the Olympics — and vary in rarity and value. The first set of pins will be available on nWay from June 17, and can be traded on a peer-to-peer marketplace to be launched shortly after the first drop.

“The first iNFT ever made, this iNFT stands at the genesis of a new medium. The collector will add to their collection this historic iNFT which will refine and develop based on their questions,” says the description of Alice on the project’s website “thefirstinft.”

According to the website, it may actually cost the collector to maintain and update the iNFT with the project noting that “depending on collectors’ plans for the iNFT, the associated hosting costs of the API calls to Alethea AI’s GPT-X will pass in full into the care and duty of the collector.”

Alethea AI does however offer a one-time free of charge set up for the intelligent NFT. The auction has six days to go and currently has a top bid of $35,000.

NFTs to raise funds for the Sydney Children’s hospital

A Melbourne-based digital artist who goes under the alias “Hipworth” on Twitter has created a one-of-one NFT which will be auctioned off at the Gold Dinner Gala on June 10 — with all the proceeds going to the Sydney Children’s hospital.

The NFT has been minted on NFT marketplace Makersplace, and depicts a silver animated queen statue backed by electronic music. Bids can be placed leading up to the event, and currently has a high bid of $1,000.