The rehabilitation plan to compensate creditors from the now-defunct crypto exchange Mt. Gox is now finalized following confirmation from a Japanese court.

According to a Tuesday announcement from Mt. Gox trustee Nobuaki Kobayashi, the rehabilitation plan originally filed in the Tokyo District Court in February is now “final and binding.” The confirmation order of the rehabilitation plan in Japan’s court system is one of the final steps in a long process that began with a 2018 petition to compensate creditors of the exchange that collapsed in early 2014.

Kobayashi said he would be in touch with “details of the specific timing, procedures and amount” of repayments to creditors who had made claims in accordance with the approved plan. Though it’s unclear whether the payments will be made in Bitcoin (BTC) or fiat, the announcement said creditors may be required to register their bank account details on the website to receive remuneration, or they could “​​encounter difficulties.”

The update from Kobayashi follows an Oct. 8 vote from thousands of Mt. Gox users whose losses are estimated to be worth billions of dollars. Roughly 99% of the creditors affected by the collapse of the Japan-based crypto exchange approved of the draft rehabilitation plan, with claimants representing roughly 83% of the total amount of voting rights voting yay.

Users who filed claims could receive the funds fairly quickly, as Kobayashi implied in October the “final and binding” ruling was the last major hurdle in the compensation process. However, some victims of the exchange’s collapse have reported infrequent communications regarding the rehabilitation plan, leading to skepticism over the timing of repayments: 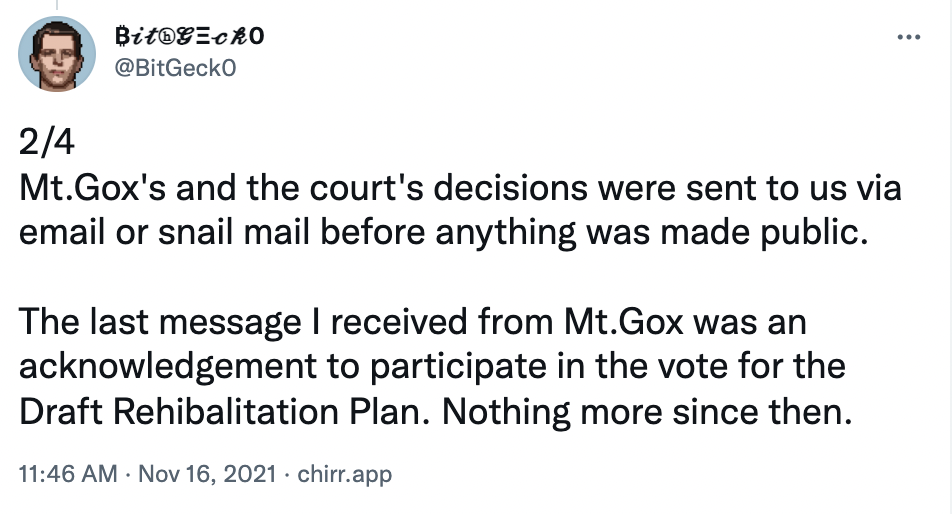 Related: Mt. Gox creditors may receive nothing if they fail to vote by Friday

First launched in 2010 by programmer Jed McCaleb and later purchased by Mark Karpelès, Mt. Gox was one of the largest exchanges in the world during the early days of crypto. A 2011 hack and the exchange’s subsequent collapse affected nearly 24,000 creditors — mainly those holding cryptocurrency.