The ShowPay team launched MetaBot, which asserts to be “the first original Collectable NFT on MetaNet” and the “first functionalized NFT based on the Sensible contract.” MetaBot are on-chain robot avatars that can be equipped as a user’s profile picture in the suite of applications via the Show App. By adding this feature, MetaBots are poised to have more utility than 99% of NFTs created thus far, including those created atop BSV.

MetaBot properties are defined via the MetaNet protocol, released by Dr. Craig Wright at the 2018 CoinGeek Conference in London.

Minting OP_RETURN payload of my #150 MetaBot: 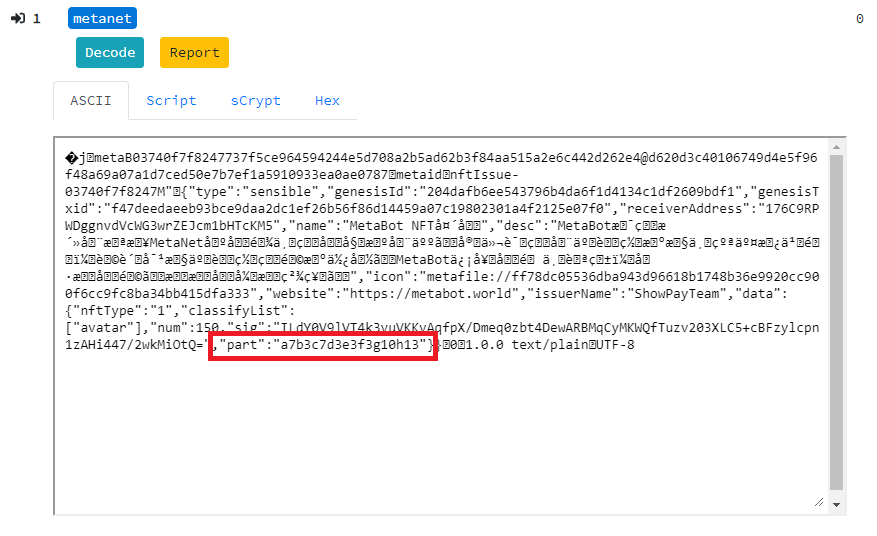 Various metadata (yes lots of ‘meta’) are defined, such as the number, transaction hash of the robot image and issuer. Most interesting is the ‘part’ field which defines the seven randomized properties of the bot—body, head, neck, ear, mouth, eyes, and hair. Part a correlates to the background color/image, b to the head, c to eye and so on.

The ShowPay team informed me eventually these parts as well as the mapping definitions will be deployed on-chain in preparation for the Remint feature which will allow combination of 2 bots into a new MetaBot. These combinations could result in the creation of an Ultimate MetaBot which are extremely rare, taking potentially thousands of attempts to create. The cost to Remint will require MetaCoin, the token whose farming activity was responsible for the 2GB block mined in August 2021.

The initial 199 MetaBot NFTs were pre-sold on 9/8/2021 at an initial 0.38 BSV price by the ShowPay team and were sold out within 10 minutes. The remaining 785 were sold over the next days at an increasing price, each sale ending faster than the previous days. As someone who participated from the second day on, I can state that I am quite lucky to be able to have purchased one.

The secondary market formed and depending on the number, are trading anywhere from 2 to 22.8 BSV:

Lower numbered bots are trading for around 10 BSV, likely in anticipation for the increased chance to Remint the rare Ultimate MetaBot. The final 13 will be sold on 9/15/2021 at an initial price of 0.98 BSV.

MetaBots #1 and #2 are reserved for the ShowPay team and chief designer respectively.

I have written about MetaBots and the implications over the past few days as part of the #Bitpost30 challenge and am quite optimistic about this project. I am wavering on my claim about equating the NFT craze to the Dot com bubble, as the creativity I am seeing (even on other chains) is showing no signs of slowing down.

The MetaBot launch has incentivized me to finally try out the suite of applications built atop the MetaID protocol, which I had been procrastinating on for one reason or another. I can say that I am addicted to the Show App, where I can seamlessly enter and exit different applications while only logging in once initially.

This feature gives even more utility to the MetaBot, as you can equip one of your bots as an on-chain avatar which will display in the various apps. Many users of the MetaNet powered social media app ShowBuzz have equipped their bot, which makes for a more vibrant online community with a shared incentive to increase the value and utility (not just monetary) of the MetaBots.

I look forward to the future of MetaBots and will be sure to keep an eye on the ShowPay team’s developments, as they have certainly made a splash in this space. Get your MetaBot today at nftonshow.com.