After sending shockwaves through the crypto industry when it was once again almost touching the $30,000 mark, Bitcoin gained about 15% in the last 24 hours after it was detected trading above the key milestone of $35000.

On Thursday, Ether, Binance, Dogecoin, Cardano, and XRP all saw gains. Ethereum, the second most popular cryptocurrency, was trading 5.27 percent higher at $2,566.40, while Dogecoin, which gained by 8%, and Binance Coin, which soared by nearly 10%.

Both the Bitcoin and Ethereum networks have witnessed on-chain activity in-active users, settlement volume, and transaction fees rebound to levels seen in 2020 and early 2021, according to statistics from Glassnode. The Bitcoin network saw a drop in active addresses during the latest sell-off, dropping 18% from recent highs to roughly 0.94M. The number of active entities has also decreased, falling from 375k to about 250k unique on-chain entities.

In the last two weeks, the volume of Ethereum-denominated transfers has plummeted by more than 60%. The average transaction cost paid for both networks has decreased as demand for on-chain transactions has decreased. On the other hand, according to statistics from Glassnode, the narrative of buying the drop is now more relevant than ever, with 85 percent of addresses profiting at the present price level. 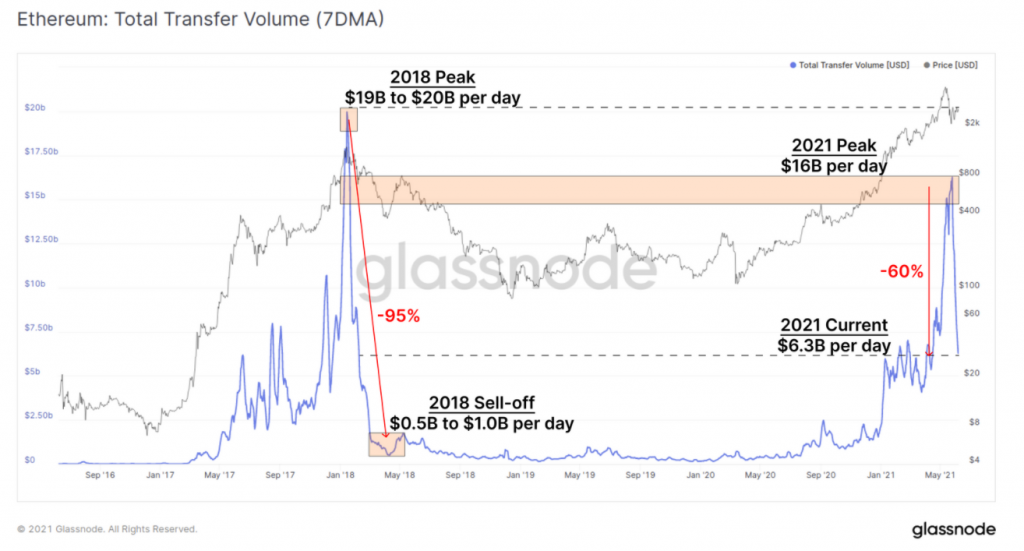 Also of note, Bitcoin investors will not be subject to capital gains tax, and cryptocurrency entrepreneurs will be granted immediate permanent residency. El Salvador President Nayib Bukele’s incentives for the crypto community have piqued the interest of investors and entrepreneurs alike, following his recent announcement to make Bitcoin legal tender in the country.

It became the world’s first country to recognize Bitcoin as a legal tender. A majority of MPs voted in favor of the initiative to recognize cryptocurrencies as legal tender, with 62 out of 84 votes in favor.