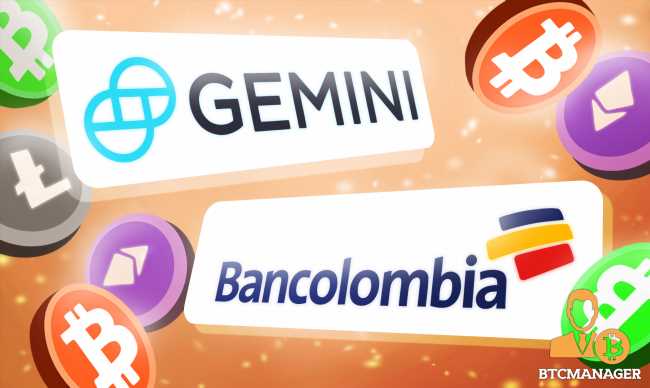 Cynthia Del Pozo García, principal of strategy and corporate development at Gemini, announced the news of the partnership in a blog post on Monday (Dec. 6, 2021). According to Del Pozo, the collaboration will begin on December 14, 2021.

Bancolombia, which also operates in other jurisdictions such as El Salvador, Peru, Puerto Rico, and Guatemala, has nearly 18 million users.

The blog post also stated that the partnership is part of a one year pilot program organized by the Superintendencia Financiera de Colombia (SFC), Colombia’s financial regulatory agency. Back in January, the SFC approved nine alliances, which involved an SFC-regulated company and a cryptocurrency exchange.

Apart from Gemini, popular crypto exchange platforms such as Binance, Bitpoint, and Bitso were also chosen to be involved in the pilot project by the SFC, with their various alliances. The SFC also noted the purpose of the pilot program, stating:

“The main objective is for all participating authorities to be able to measure the effectiveness of recent technological developments in verifying digital identity and traceability in transactions within the scope of their assigned powers in the current framework.”

The Gemini executive said that the company’s entry into Latin America is part of the exchange’s broader initiative to make crypto available to individuals globally. An excerpt from the announcement reads:

“The partnership also serves as an important step toward the strategic expansion of Gemini’s presence in Latin America. We look forward to working closely with the Colombian crypto ecosystem and to supporting crypto products that empower Colombians to take control of their financial lives.”

Meanwhile, crypto adoption continues to see increased growth in the Latin American region. As previously reported by BTCManager back in December 2020, Venezuela and Colombia were the countries with the second and third highest peer-to-peer (P2P) bitcoin trading volume on LocalBitcoins.

El Salvador, on the other hand, made history as the first country globally to officially make bitcoin a legal tender.