Ethereum neared a level of resistance while forming a bearish pattern. Longer time-frame analysis showed that the asset appeared bearish. VeChain continued to form higher lows and though it lacked momentum at the time of writing, the next few days could see a rise for VET. Maker showed signs of bullishness and could seek to make gains in the coming days. 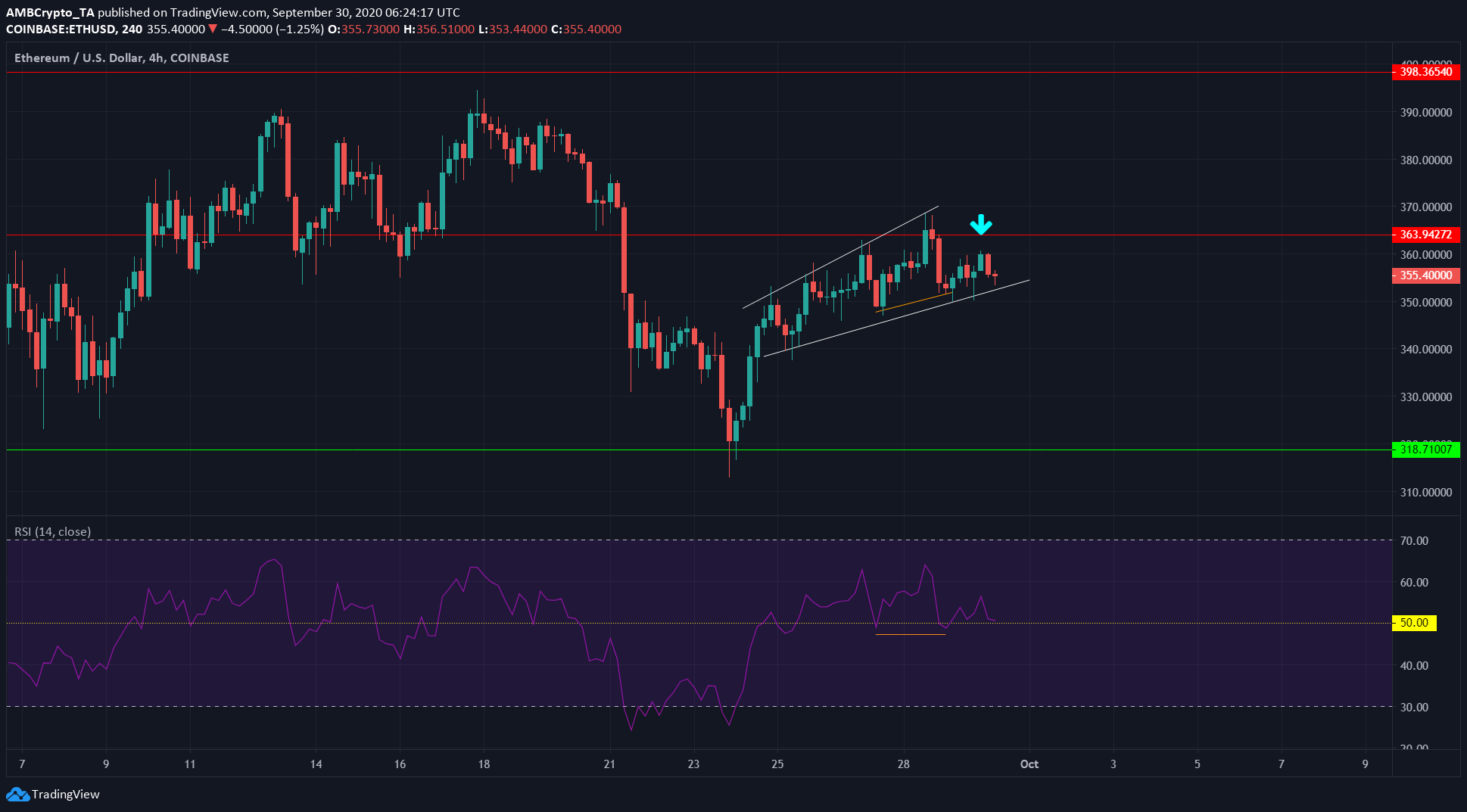 Ethereum exhibited a bullish divergence, highlighted in orange. Price made higher lows while the momentum indicator (RSI) made higher lows. Subsequently, ETH rose to $360, as shown by the cyan arrow, before facing losses.

ETH, on the 4-hour chart, also formed a rising broadening wedge pattern, shown in white. This is a bearish reversal pattern, that can lead to ETH dropping to $340 in the coming trading sessions.

If a trading session closed beneath the wedge pattern, a plunge to $340 would become more likely.

Legal authorities in South Korea have ruled in favor of Bithumb. The exchange was sued by an unnamed investor after Bithumb was hacked in 2017 and the investor lost $402,000 worth of funds by the hackers behind the attack on the exchange and used the funds to buy ETH. 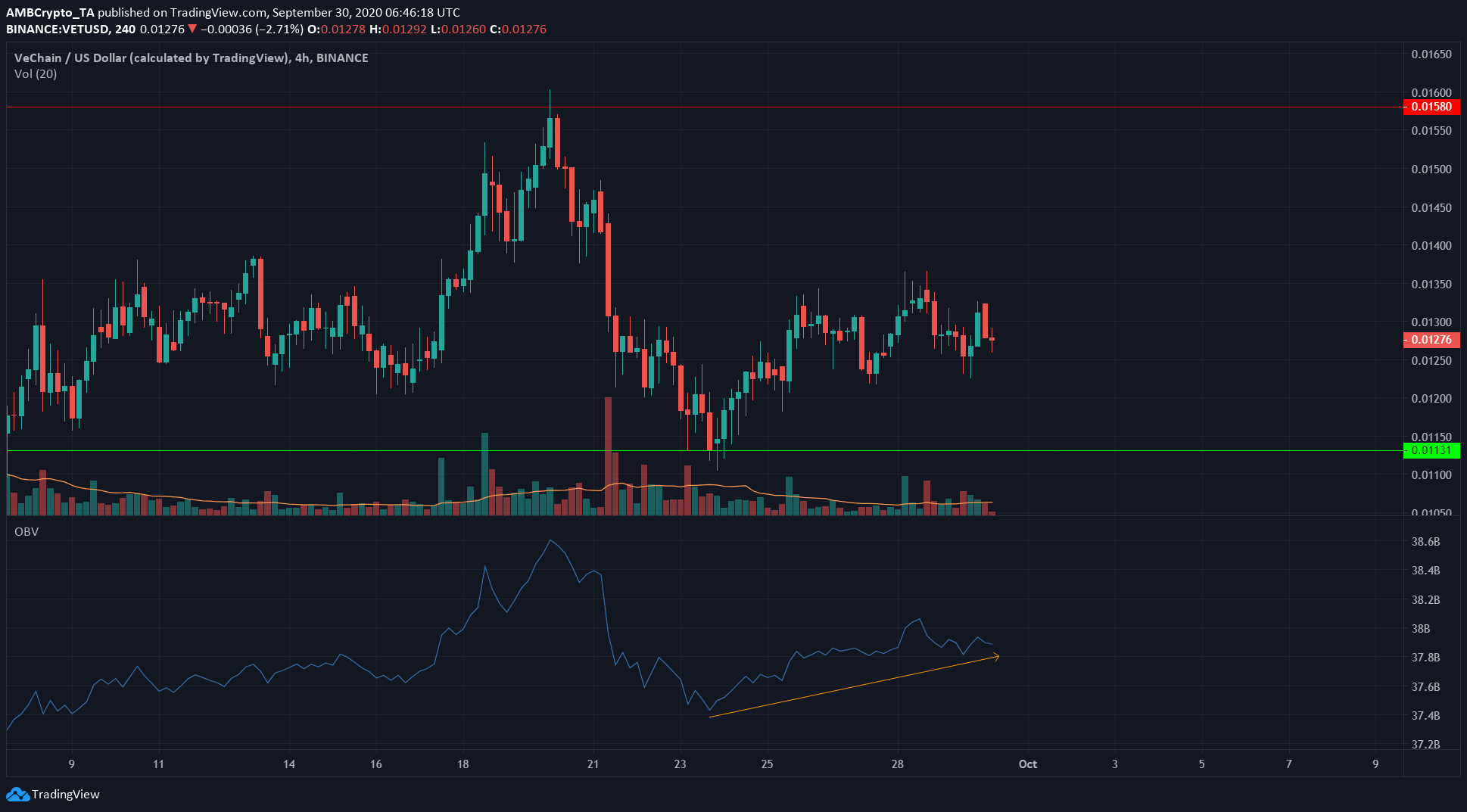 VET faced some resistance from the region at $0.0133. It had formed an ascending triangle pattern, but the price closed beneath the rising trendline and invalidated the pattern.

OBV showed that buyer interest accompanied the recent hike in VET prices. The buying volume outweighed selling volume and made higher lows along with the price. This indicated bullishness in the near-term for VET.

Many trading sessions that saw losses for VET in the past week have been on average or low volume, indicating the lack of real bearish pressure on the asset at these price levels. The conclusion was that VET could still rise higher, past $0.0133 to the $0.0145 zone. 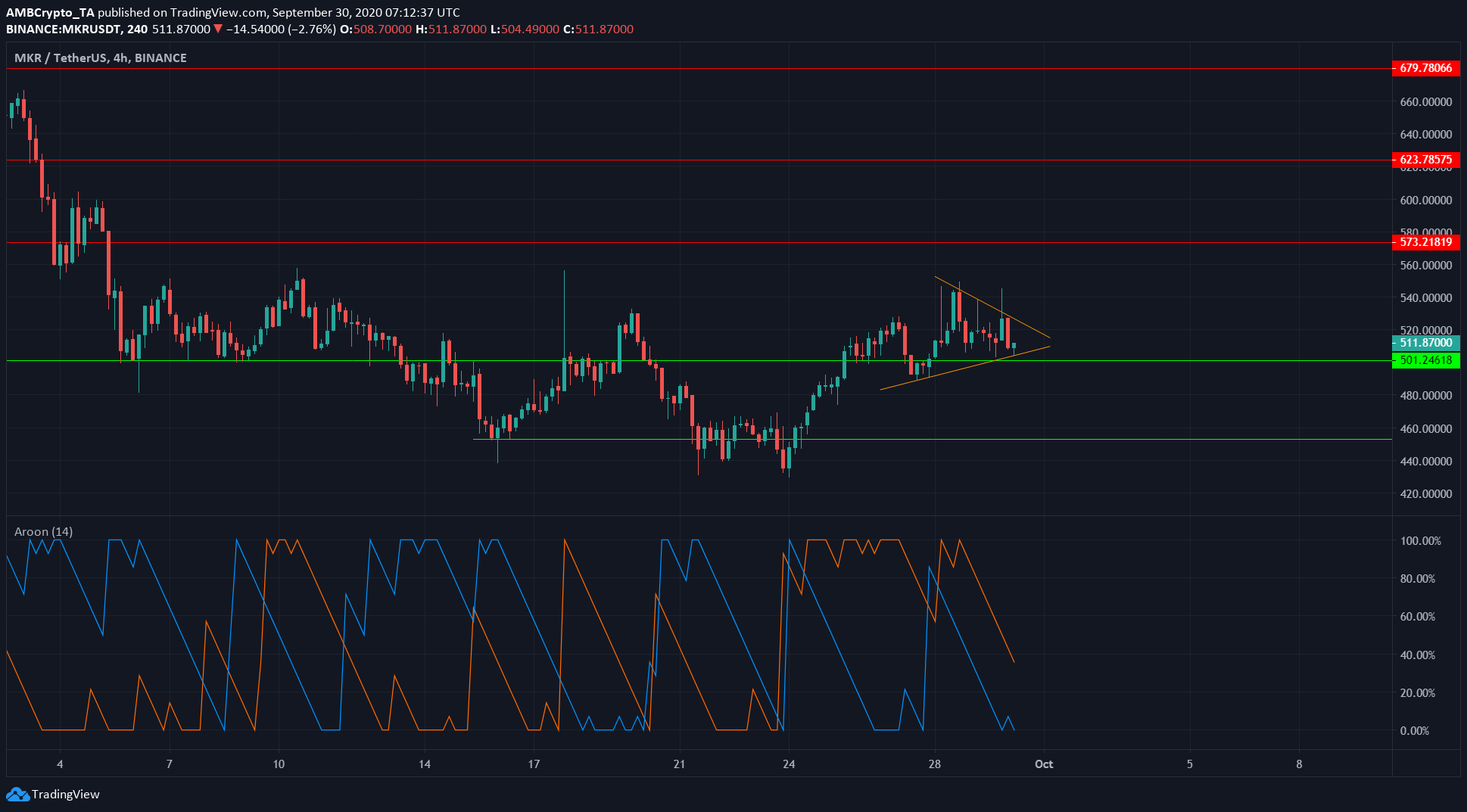 MKR formed a symmetrical triangle (shown in orange), a continuation pattern that sees the price follow the prior trend.

In this case, the prior trend was bullish in the near term. This is confirmed by the Aroon Indicator, whose Aroon Up (orange) lines have dominated recently, showing a strong uptrend.

At the time of writing, MKR had a likelihood of breaking out of the pattern and reaching $540 in the next few days, with a zone of resistance at $575.

Lates News:
2020-10-01
Previous Post: Australian Securities Exchange to triple capacity of DLT system
Next Post: A Drop Under $300 Is the Path of "Least Resistance" for Ethereum