The reveal came first from the company’s website, with its support section disclosing the addition of the cryptocurrency as a payment option.

“What can I buy from Tesla with Dogecoin? Look for the Dogecoin symbol next to the “order” button for Dogecoin-eligible products,” reads the section.

Elon Musk later confirmed the news, sending the DOGE army into a buying frenzy and cementing his earlier averments about Dogecoin being a better payment option.

But while the news is relatively new to a greater audience, about two days ago, some hawk-eyed tweeps had noticed the inclusion of the coin as a payment method on Tesla’s Model Y payment page code. Yesterday, another user noticed Doge was also reflecting on the company’s Merchandise-Shop’s Sourcecode, signaling the addition of the cryptocurrency to Tesla’s list of payment options. 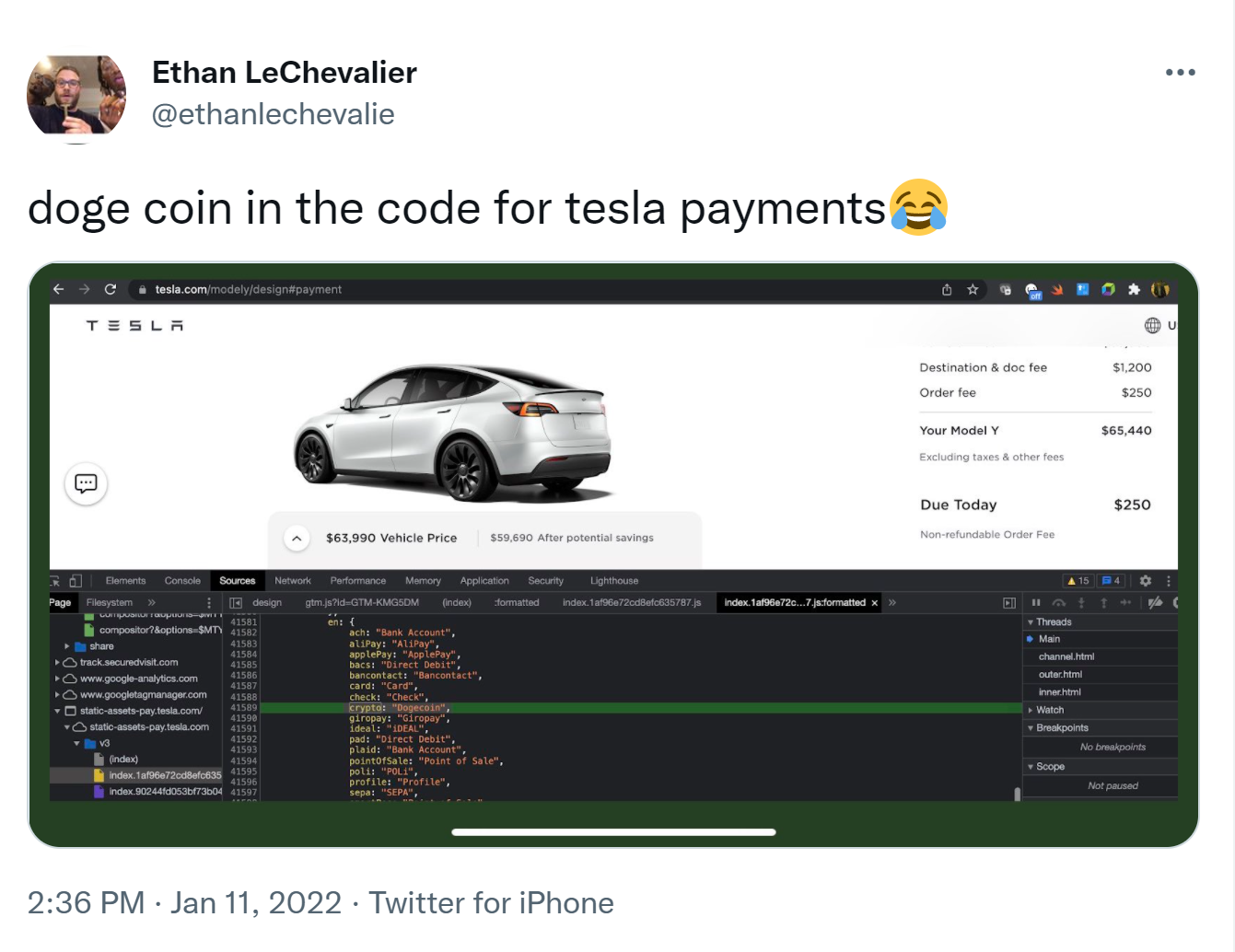 According to the support page, purchasers who prefer to use Dogecoin will be expected to have a dogecoin wallet, with which they can make payments to Tesla’s already built-in platform.

“When checking out with Dogecoin, the payment page will display the Tesla Dogecoin wallet “address” in both an alphanumeric code and a QR code form for you to connect to your Dogecoin wallet to transfer the Dogecoin.”

Merchandise will be tagged in Dogecoin as opposed to dollar figures, enabling the purchaser to input accurate amounts when checking out. Payments through Dogecoin will, however, be subject to various rules, for example, items purchased with Dogecoin cannot be returned, exchanged for another item, canceled, or exchanged with cash. Currently, Dogecoin payments are available to only a range of Tesla’s merchandise including Tesla Cyberwhistle’s, its wireless portable chargers, its cyber squad for kids among other products.

Whereas Tesla is yet to start accepting Dogecoin for car purchases, its recent move is seen as a huge step towards Elon’s agitation for a more sustainable cryptocurrency. In the past, the Tesla boss has voiced reasons as to why Dogecoin is a better payment option compared to the likes of Bitcoin.

“The transaction value of Bitcoin is low and the cost per transaction is high. At least at a space level, it is suitable as a store of value. But fundamentally, Bitcoin is not a good substitute for transactional currency,” he recently told Time Magazine.

His admiration for the canine-themed coin has been growing since last year after he announced that Tesla had dropped Bitcoin payments citing high energy usage. This was shortly after stating that Telsa cars were purchasable in Bitcoin.

Shortly after Elon Broke today’s news, Dogecoin’s price jumped 17% to tap $0.2153 and is currently trading at $0.2000 with prices expected to push higher during the London and U.S. market sessions.