The world’s largest publicly traded company, Apple Inc. is extremely well positioned to boost cryptocurrencies (more than Tesla) to a point of no return in the US.

This is according to a new report by top global investment bank RBC Capital Markets, which released the research in the wake of Tesla pushing bitcoin up over 20% from $38,076 t0 $48,003. 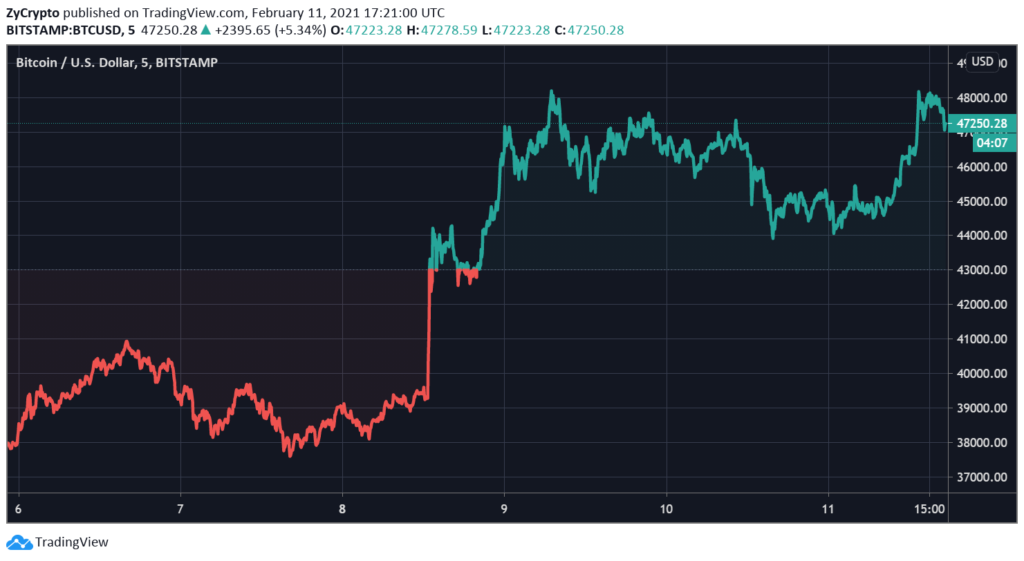 Apple’s world-class encrypted software could solve the problem of acquiring crypto assets due to varying regulatory requirements like licensing and KYC, by providing instant trading services in a closed and secure environment.

It could also choose to develop an open system using a banking service and a bitcoin wallet or the bitcoin scaling network (lightning) to reduce the transaction cost of converting cash into Bitcoin.

RBC: Do the Math Apple

Apple, which already provides a payment wallet for its loyal customer base could generate over $40 billion by venturing into the crypto business and make the US a world leader in cryptocurrency technology.

“For example, if the firm purchased $5 billion of bitcoin (20-25 days of cash flow), the price of the underlying asset would need to rise by 10% for the firm to fully find the entire project in the first place.”

Mitch Steve, RBC’s analyst said that Square, a merchant service and mobile payments platform already generates approximately $1.6 billion every quarter in BTC revenue from a customer base of around 30 million.

“Apple’s install base is 1.5 billion and even if we assume only 200 million users would transact, this is 6.66x larger than Square. Therefore, the potential revenue opportunity would be in excess of $40 billion a year (15% incremental top-line opportunity.”

The report suggests that Apple could easily finance the whole operation of developing an Apple crypto wallet and exchange service which would cost around $500 million by adding Bitcoin to its balance sheet.

“This is a solid value proposition in our view, as the business would be funded without diluting any other projects at the firm.”

Therefore, if Apple wanted to, it could launch a cryptocurrency exchange service and wallet and help to make it impossible for the US government to even consider banning cryptocurrencies since the majority of crypto assets would be owned by Americans.

“If the USA owns the most crypto assets, (bet it Bitcoin or other assets) it would not make logical sense in our view to ban it.”

Furthermore, competition in the crypto space is currently very light and Apple could especially capitalize on the fact that many exchanges go down when trading volume (caused by higher user demand for crypto assets) skyrockets.