Bitcoin (BTC) has now started to decline after a liquidity hunt above $7,400.  We pointed to this well before it happened and warned against being bullish at that point.  Now the price ended up rallying as high as 7522 before it started to decline erasing that whole move to the upside.  As long as the price remains above the 7189 level there’s still the possibility of another liquidity hunt considering BTC/USD did not test the 38.2% fib retracement level yesterday.  It is pertinent to note that the price does not have to touch that level again but a rejection at that level would have provided further much needed confirmation regarding the next downtrend.  Bitcoin is now at risk of a significant sell-off if the bulls fail to save the price from falling below $7,300.

Bitcoin (BTC) closed the week above the 100-week exponential moving average for the fifth consecutive time. This has had quite an impact on sentiment as the fear and greed index is up three points from yesterday.  It is still in the fear territory but if the price remains above the $7300 level for long even if it trades sideways, optimism is likely to rise and we can expect greed to return to the market.  Bitcoin (BTC) bulls remain as complacent as ever regardless of the recent weakness that we see in the price action.  Even though a rally towards 8000 is still on the table the vast majority of retail bulls expect the price rally much higher in the near future.  It is therefore not difficult to see that a lot of retail bulls would be taken by surprise when the price declines down to 6,000 or below that.  This is not the time to be overly bullish on the market whether it is near term or long-term. 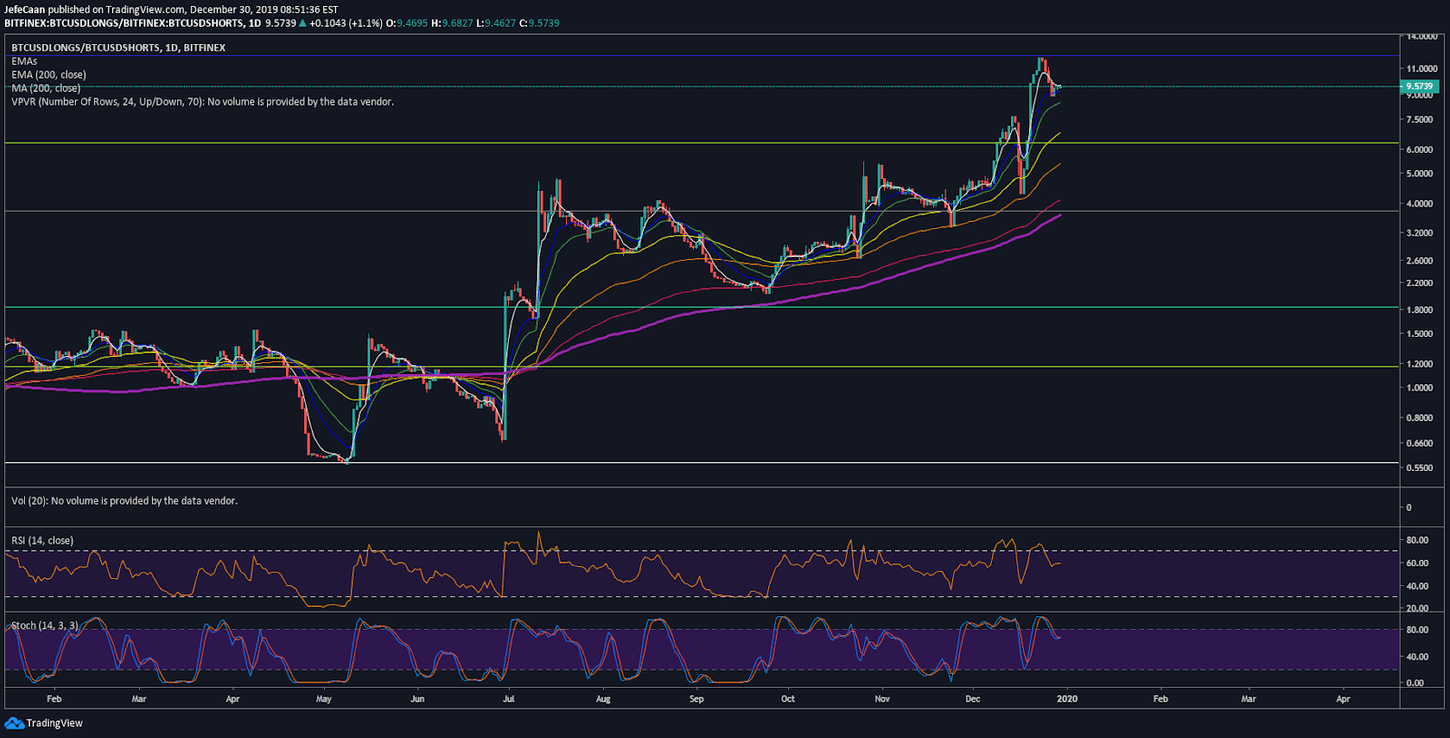 Even though we can see that BTCUSDLongs/BTCUSDShorts has started to rise again it’s important to realize that this ratio can keep on rising even if the price trades sideways above the $7,300 level. BTCUSDLongs is still at an all-time high which is not likely to end well for a lot of retail bulls.  We can also see on the daily chart for BTC/USD that the RSI has a run into a key resistance indicating the price is primed for a sharp decline from current levels.  It does not however omit the possibility of another bounce.

The last two years have been of much consequence for Bitcoin and the next year is expected to be even more consequential as we’re likely to finally see the end of this bear market.  As good as it sounds it is not going to be all that well for the majority of retail traders that are still overly optimistic regarding the cryptocurrency market.  It is true that price tends to rise before halving approaches, it is also true that a lot could happen between now and the next halving. In order for the price to begin a new bullish cycle we would need to see capitulation in this market which we have not yet seen.

Is Blockchain Necessary? An Unbiased Perspective

Blockchain Is Not a Panacea for Finance, Says Russian Bank Official

Stellar Will Give 2.5 Million Lumens To Charities to Help During Crisis

The Stellar Development Foundation has committed up to 2.5 million Lumens to six non-profit organizations to help out during the coronavirus crisis — and they’re […]

Recent changes to Intelligent Tracking Prevention (ITP) in iOS may have killed burner wallets for iPhone users. Burner wallets are non-custodial wallets that store a […]

The cryptocurrency trading app of Germany’s second-largest stock exchange, Boerse Stuttgart, exceeded 100,000 users on March 30 amid increasingly permissive regulations in the country. The […]

Nik Bougalis, a cryptographer, software engineer and lead of the C++ team at Ripple, has published a proposed method for enhancing the privacy of transactions […]

3M to increase production of face masks after Trump order

Pictured: 19-year-old who bled to death after stabbing outside garage